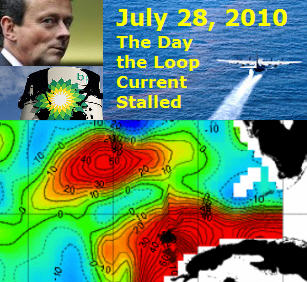 This could be the most significant man-caused Earth Changes news thus far in my lifetime.  This morning, Lesie Pastor informed the New Energy Congress of a report by Your Own World USA that as of July 28,

Oceanographic satellite data now shows that the Loop Current in the Gulf of Mexico has stalled as a consequence of the BP oil spill [volcano] disaster. This according to Dr. Gianluigi Zangari, an Italian theoretical physicist, and major complex and chaotic systems analyst at the Frascati National Laboratories in Italy.

He further notes that the effects of this stall have also begun to spread to the Gulf Stream. This is because the Loop Current is a crucial element of the Gulf Stream itself and why it is commonly referred to as the “main engine” of the Stream.

The concern now, is whether or not natural processes can re-establish the stalled Loop Current. If not, we could begin to see global crop failures as early as 2011.

Images of The Day After Tomorrow flashed in my head.  The disruption of major ocean currents is no small thing.  The climate ramifications are massive, worldwide.

The Gulf Loop is the current that loops up, to the right of the middle of the Gulf of Mexico then drops down to the left of Florida where it then passes below Florida into the Atlantic, where it contributes to the Gulf Stream, which passes up the east coast of the United States and Canada.

The Gulf Stream is what keeps the east coast of the U.S. as well as Britain and Europe more temperate, compared to what they would be without this warm current passing by.

After reading through the article, seeing its scientific backing, and discussion of the ramifications, I went to Google to see if this is getting mainstream press attention.  A Google News search for “Loop Current” Stalled came up null.  Nada, nothing.

“How could that be?” I wondered.  This is huge, and it’s something that mainstream science and the mainstream press could easily verify and report.

I then placed a call to Paul Noel, who seems to always be up on things like this.  I caught him in the middle of a family vacation event at a museum, so I was only able to speak with him for a couple of minutes, but he said that he had noticed that the current had stalled.  “I check the loop current periodically”, he said.  He also said that a new phenomenon had cropped up on the beaches.  Something about a “bathtub ring” of oil residue.  I didn’t catch how this was new, and he had to go.

So apparently, this is a breaking development that will most likely take a while to sink in, just as the initial BP rig fire and sinking and oil volcano took a while for people to realize its significance and impact.  The people still living near the Gulf may yet be in denial as to the impact of the toxic fumes coming off the slick, poisoning their rain and crops and groundwater.  Now the other shoe drops.  The Loop Current stalls, and now the globe will feel the impact.

Here is the rest of the story from Your Own World USA:

An Open System in Trouble

The Loop Current is a clockwise flow that extends northward into the Gulf of Mexico and joins the Yucatan Current and the Florida Current to the Gulf Stream. 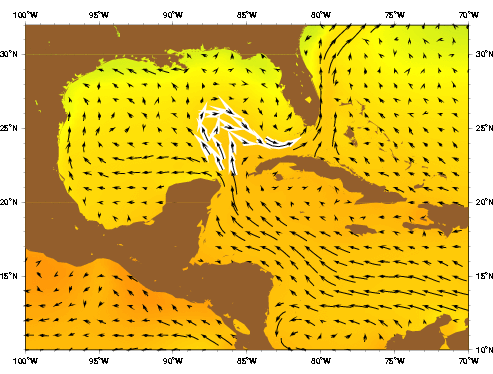 Although at first glance the Loop Current appears confined within the Gulf, scientists define it as an “element of an extremely complex, open system”: as all other “elements” of the so-called “Earth System”, are not separable from the others.

These various “elements” of the Earth System (i.e., atmosphere, landmasses and so forth) are so strongly correlated to one another that at some point, they become indivisible.

Why is this important to all life on the planet? The Gulf Stream is a strong interlinked component of the Earth’s global network of ocean conveyor currents, which drive the planet’s weather systems.

For this reason, Zangari’s concern is that should the Loop Current fail to restart, dire global consequences may ensue as a result of extreme weather changes and many other critical phenomena. The repercussions of which could trigger widespread droughts, floods, crop failures and subsequent global food shortages.

While pundits are certain to trivialize the ramifications of this event, “the real worry” says Zangari, “is that that there is no historical precedent for the sudden replacement of a natural system, with a dysfunctional man-made system. That is, except for the atomic bomb blasts and contamination as a result of nuclear waste and nuclear plant accidents, such as the April 1986, Chernobyl disaster

In what is now widely regarded by many as “Oil’s Chernobyl,” Americans, and particularly Gulf Coast residents are disheartened by a steady stream of bureaucratically bungled responses, which are now proving to be just as a deadly as the initial event itself.

Perhaps even more so, as this toxic brew of incompetence, greed, corruption, oil, Corexit dispersant and other chemicals has unleashed a man-made disaster in the Gulf, with frightful possibilities for the future.

The use of Corexit as a dispersant was first brought to the public’s attention during the 1989 Exxon Valdez oil spill.

A powerful solvent used as a dispersant for oil slicks, public knowledge about the dispersant and its long-term effects is hampered by the proprietary protections of its manufacturer, Nalco Holding Company, which is associated with British Petroleum (BP) and Exxon.

What is known, is that this petroleum-based formula is regarded as being at least four times more toxic to life, than the oil is disperses by many environmentalists.

Officially, just over one million gallons of Corexit has been spayed in the Gulf of Mexico, but reliable sources tell Yowua.com that the actual amount could easily be twice that much.

Either way, current satellite data of the Gulf feeds tell Zangari that the Loop Current in the Gulf of Mexico has clearly stalled due to environmental impacts from a man-made introduction of oil, which were then compounded by other agents (Corexit and so on).

Worse yet, these real-time satellite data feeds offers clear evidence to Zangari that a new artificial system has been generated in of the Gulf in a remarkably short period of time. It is this new and unnatural system which has changed the viscosity, temperature and salinity of the Gulf’s seawater, thereby causing the Loop Current to stall. A system that has existed for millions of years.

Consequently, there is no possible way for scientists to predict its future evolution, though corporate spinmeisters and media pundits will no doubt be sure to offer a bevy of right-sounding predictions. Their goal as it has been throughout this ordeal, will be to deflect attention by trivializing the severity of the event with simplistic and misleading explanations.

However, researchers like Dr. Gianluigi Zangari, offer insights that transcend the politics of oil.

However, what makes Dr. Gianluigi Zangari’s findings so vital to the common man, is that for over a decade, he has conducted his continuous global analysis climate research, using publicly available data. Unlike the jealously guarded formulas for Corexit, anyone can vet his research without having to run through a gauntlet of corporate lawyers. 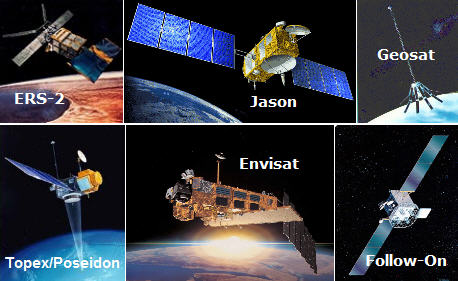 These satellite feeds are are captured and made publicly available by NASA, NOAA and by the Colorado Center for Astrodynamics Research (CCAR) at the University of Colorado at Boulder.

These CCAR data maps offer researchers like Zangari a continuous stream of markers for sea and ocean dynamics: surface height, velocity, temperature. A fourth marker that Zangari has found to be especially helpful, are chlorophyll infrared emission maps. This is because they show him real-time changes in the shape of the Gulf Stream. 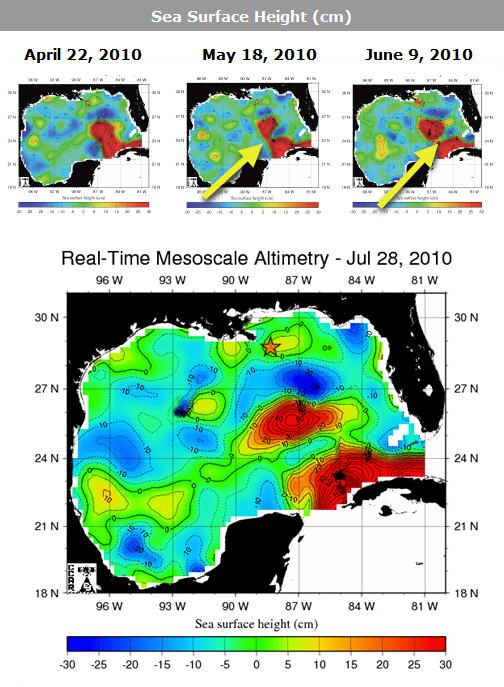 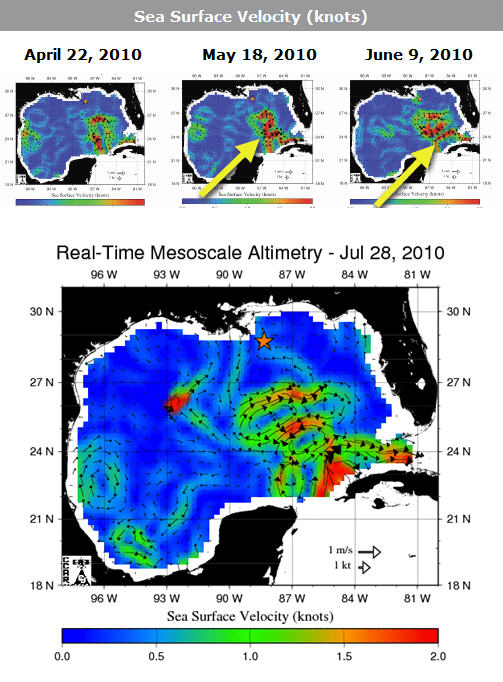 In addition to changes in ocean velocity, Zangari is reporting an equally troubling analysis with sea surface temperatures. The data published by Rutgers University is from National Oceanic and Atmospheric Administration (NOAA) data maps. Dr. Zangari re-elaborates and checks these data maps using his own calculus system called SHT (patented in 1999.) 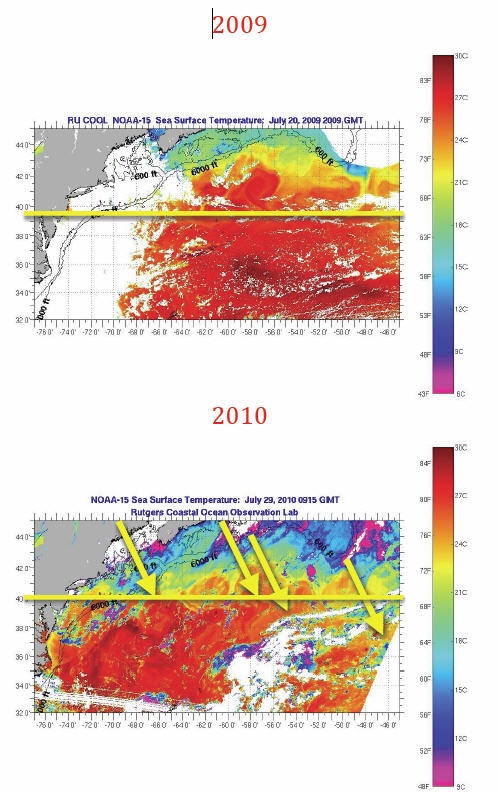 Taken altogether, these four oceanographic markers began taking a turn for the worse, shortly after the Deepwater Horizon well explosion on April 20, 2010. This rapid turn of events raised Zangari’s concerns about the Gulf’s Loop Current, and then on July 28, 2010 the worst case imaginable happened. “The Loop Current simply stalled,” Zangari noted sadly “and we have no idea if it can reorganize itself, because now we’re dealing with troubling unknowns.”

At present, Admiral Thad Allen is trying to assure Americans that the worst of the disaster has passed and that the oil slicks have disappeared due to natural processes. However the markers from oceanographic satellite feeds Dr. Zangari is studying tell him an entirely different story.

The millions of gallons of Corexit sprayed in the Gulf have given BP and the US government a convenient way to mitigate public concerns by removing the threat from sight. The logic being that since the oil is disappearing, so is the crisis. However, taking oil from the surface and spreading through the water column is not a PR matter. Instead, it has become a convenient way to cover up one massive mistake, with a tragically larger one.

To help understand why, let’s assume that what is really happening in the Gulf is not much different from what happens when you shake a bottle of oil and vinegar salad dressing. Leave the bottle on the shelf for a while and the oil and vinegar will naturally separate, each with it’s own unique viscosity.

However, when the bottle is shaken the two are mixed. This creates a new, and overall thicker viscosity, hence the dressing pours more slowly. In very simple terms, this is what happened in the Gulf of Mexico, which begs another question. Was the Gulf of Mexico intentionally written off early on, so as to protect the Gulf Stream and America’s NATO partners?

Will This Stall Spread Into the Atlantic? 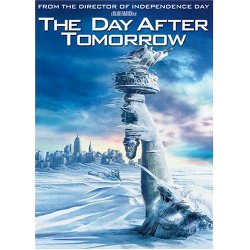 The importance of the Gulf Stream was brought to the forefront in the blockbuster film The Day After Tomorrow (2004) where the Gulf Stream stalled, causing temperatures in New York City to plummet from sweltering to freezing in a matter of hours.

Based on real science, the film showed movie audience how the the Gulf Stream transports warm water from the equatorial regions of the Earth, along American’s Eastern seaboard and then across the Atlantic to Northern Europe.

For this reason, the focus of Zangari’s research is presently centered on finding signs of a return to the former natural equilibrium of the Gulf. Again, he stresses making predictions (pessimistic or optimistic alike) because “these phenomena are unpredictable because they are ruled by strong non-linearities.”

Nonetheless, we must must ponder the question: What does this new nexus portend for our future? To that, Zangari says “we can affirm that this system (the Gulf Stream) is changing in an unpredictable way, which may produce serious consequences on planetary scale.”

Yowusa.com will report new developments in Dr. Zangari’s research as they become available.

God help us all.  This planet is in crisis.

7 thoughts on “Loop Current in the Gulf of Mexico Has Stalled From BP Oil Disaster!”