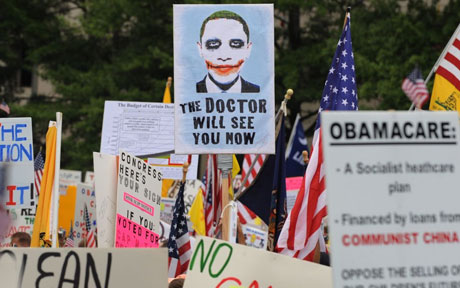 The Battle of Obama’s Healthcare is looking to go down in history as a major confrontation between the power of federal government and the self-determination of individual states. And that eternal tension between what used to be called state’s rights and the coercive inclinations of federal authority has been at the heart of the most momentous struggles in national history – not least the civil war which tested the strength of the Union to breaking point.

Barack Obama’s health reforms have been challenged by a startlingly successful rebellion in Missouri. A state ballot referendum on Proposition C which prohibited federal government from requiring people to buy health insurance or from penalising them if they did not, was carried by a majority of 71 per cent.  (Making health insurance compulsory is one of the fundamental tenets of Obamacare.) The actual constitutional basis for this challenge may seem technical in British terms: it centres on the point that there should be no federal compulsion forcing people to engage in inter-state commerce (ie buying things across state lines).

But in fact, the basic principle would be easily recognisable (and probably equally contentious) here. The new healthcare system makes it legally mandatory to purchase a particular kind of commercial product. This is not utterly without precedent, of course. You are at the moment legally required to have third party car insurance if you own a car. But that is the important difference: you are free to choose whether or not to own a car. As one political opponent of Obamacare put it, this is the first time that people would be forced to buy something simply by virtue of being alive. That is a form of state coercion that, particularly, in the US seems bizarrely autocratic and profoundly alien to the spirit of the Constitution.

The argument about this should be a straighforward one of individual liberty vs the invasive power of the state. But in the US – the land of litigation and a written constitution – it will be fought through the Courts and at its heart will be the great unresolved dispute between the sovereignty of member states and the ever-increasing dominance of federal government. The two sides of this argument seem to be girding themselves for one of those periodic tumultuous collisions which threatens the stability and cohesion of the country. Needless to say, there may be a lesson here for our own dear EU: the further away (and less accountable) the governmental authority is, the more its strictures are resented and resisted.