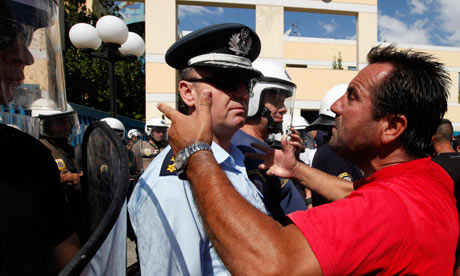 A protesting lorry driver argues with a police officer outside the Ministry of Transport in Athens. (AP)

Greek security forces have warned of a wave of violence reminiscent of the terror that stalked Italy in the seventies after urban guerillas threatened last week to turn the country into a “war zone”.

“Greece has entered a new phase of political violence by anarchist-oriented organisations that are more murderous, dangerous, capable and nihilistic than ever before,” said Athanasios Drougos, a defence and counter-terrorism analyst in Athens.

“For the first time we are seeing a nexus of terrorist and criminal activity,” he said. “These groups don’t care about collateral damage, innocent bystanders being killed in the process. They are very extreme.”

The threats came from a guerrilla group called the Sect of Revolutionaries, as it claimed credit for the murder of Sokratis Giolas, an investigative journalist. Giolas was shot dead outside his Athenian home on 19 July, in front of his pregant wife.

The gang promised to step up attacks on police, businessmen, prison guards and “corrupt” media – and, for the first time, threatened holidaymakers.

“Tourists should learn that Greece is no longer a safe haven of capitalism,” its declaration said.

“We intend to turn it into a war zone of revolutionary activity with arson, sabotage, violent demonstrations, bombings and assassinations, and not a country that is a destination for holidays and pleasure.”

In an accompanying picture, the group displayed an arsenal that included AK 47 assault rifles, semi-automatic pistols and brass knuckledusters.

“Our guns are full and they are ready to speak,” it said. “We are at war with your democracy.”

The terror threat comes as Greek authorities endure a summer of strikes and escalating upheaval. Military trucks and petrol company vehicles were employed yesterday to alleviate a fuel shortage as more 30,000 lorry and tanker truck operators ignored a government order to return to work on pain of prosecution. Shortages were reported on many holiday islands and destinations in northern Greece where thousands of tourists are stranded.

The far more serious scourge of domestic terrorism was thought to have been eradicated in 2004, with the disbandment of the 17 November group.

Born out of the turmoil that followed the collapse of US-backed military rule, 17 November murdered the CIA station chief, Richard Welch, in 1975.

For the following 27 years it targeted Turkish envoys, juntists, US military personnel, industrialists and western diplomats, including a British military attaché in Athens, Brigadier Stephen Saunders, who was murdered in 2000.

Unlike 17 November, Greece’s new generation of urban guerrillas has not tried to garner popular support.

The Sect of Revolutionaries emerged from the rioting after a teenager, Alexis Grigoropoulos, was shot dead by a policeman in December 2008. The men and women thought to comprise its closely guarded ranks are in their late twenties and thirties and appear to espouse violence almost for the sake of it.

“We don’t do politics, we do guerilla warfare,” its members announced in the proclamation placed on the boy’s grave within hours of their first attack, on a police station, in February 2009. Two weeks later they sprayed the offices of a private television station with bullets. Three months after that, they claimed their first victim, Nectarios Savvas, a police officer protecting a state witness. Six people have died in separate attacks this year.

Last month another group, yet to be named, sent a parcel bomb wrapped up as a gift to the office of Michalis Chrysohoidis, the minister in charge of public security. It killed his chief aide.

The surge in violence comes amid rising social tensions over the austerity measures enforced by the government in exchange for €110bn in emergency aid, the biggest bailout in history.

Mounting social unrest, waning support for political parties and record levels of unemployment among an increasingly radicalised youth are believed to have augmented the ranks of anti-establishment groups.

To date Chrysohoidis, who oversaw the break-up of 17 November during a previous stint in the same post, has ordered police to tread a fine line.

But anger is growing. Security officials say it is only a matter of time before one of the three groups currently active in Greece strikes again.

More worrying, they say, are their connections to the Balkan criminal underworld that has made access to weapons dangerously easy.

“In other European countries, home-grown terrorism has been on the decrease for years,” said Drougos. “But in Greece the situation is not unlike pre-Bolshevik revolutionary Russia or Italy at the start of the terror campaign by the Red Brigades… it’s very unpredictable and tourists should be vigilant.”