– “Helmand Afghans Want To Be Governed By Taliban” says the BBC News:

“This man says that the problems should be addressed by negotiation, not war. When I asked the group who they would like to be responsible for running this area they answered, to a man, Taliban.”

Now that should be an eye-opener to the blind.

Nine years after the invasion, US-led forces are still trying to pin down and defeat the elusive Taliban 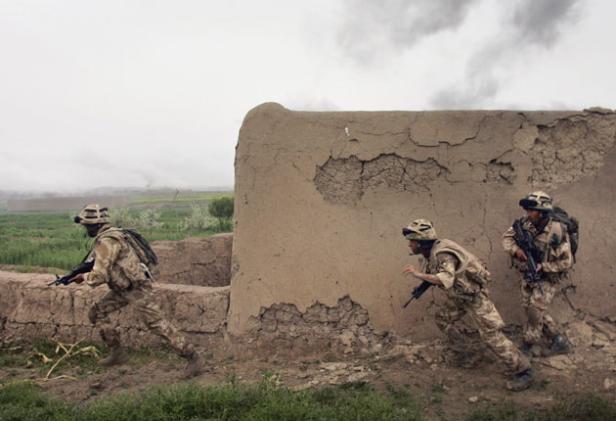 British Marines in action during operations near Kajaki, Helmand province

At midnight last night, the United States formally recorded its most lethal month in the seemingly endless war in Afghanistan. Some 66 servicemen died – at least two a day, every day, for 31 days. That was July. June was the deadliest for the coalition as a whole, and the first six months of 2010 were among the bloodiest for civilians since records began in 2007. What will August bring? Or September and October, months which, General David Petraeus, the US commander, has warned may well bring even more intense fighting? By that time, the war will have gone into its 10th year, and so will move towards, and beyond, the landmark when it will have lasted longer than the First and Second World Wars combined.

It is, especially for the Afghan people, a war without end, and one to add to their history of other fruitless conflicts. An Independent on Sunday assessment, using records kept by Professor Marc Herold of the University of New Hampshire and the UN, puts the civilians killed as a direct result of the war since 2001 at 13,746. Last year, the toll of those who died directly or indirectly was estimated by another US academic to be as high as 32,000.

Meanwhile, the US continues to pile in troops. American strength stands at about 95,000, and by the end of August the figure is expected to swell to 100,000 – three times the number in early 2009. As a result, US commanders have been stepping up the fight against the insurgents in their longtime strongholds such as the Arghandab Valley, Panjwaii and Zhari – all on the outskirts of Kandahar city, the biggest urban area in the ethnic Pashtun south, and the Taliban’s spiritual birthplace, where support for the insurgency runs deep.

Yet, as the US and its allies step up pressure around Kandahar, Taliban resistance has also intensified in Helmand to the west and in Zabul to the east. And there were disconcerting scenes in Kabul on Friday. Police fired weapons into the air to disperse a crowd of angry Afghans who shouted “Death to America!”, hurled stones and set fire to two vehicles after an SUV, driven by US contract employees, was involved in an accident that killed four Afghans.

Yesterday, hundreds of UK troops, together with Afghan army units, were in the second day of Operation Tor Shezada, attempting to push Taliban insurgents out of a stronghold in southern Afghanistan. Military chiefs said they made progress, and two compounds near Sayedebad in central Helmand were being held. The operation started on Friday, spearheaded by 1st Battalion, The Duke of Lancaster’s Regiment, with soldiers being dropped from Chinook helicopters under cover of darkness. They then moved in to clear compounds and establish patrol bases in the area. They were unopposed as they took their first objectives and then reinforced positions.

Major Simon Ridgway said British and Afghan troops had faced no more than limited small-arms fire in the initial stages. “By securing and dominating the area, we reduce the freedom of movement for the insurgent and then, together with the local people… we can establish security that stops the insurgent having the ability to influence and intimidate the local people.”

The Ministry of Defence said the operation was “progressing well”.

Such upbeat talk is not new, and is often followed, weeks or months later, by news that successes have been undone by Taliban resurgence, Afghan government corruption, or the day-to-day survival instincts of a war-weary population whose hearts and minds have never been lastingly captured. The US documents made public by WikiLeaks have only added to the sense that the Afghan war against an elusive enemy unaccountable to any democracy is the unsustainable in pursuit of the unbeatable.

New details of incidents referred to in the documents highlight the relentless “collateral damage” – revealing how innocent bystanders have been killed, including women and children, by coalition forces. Among the cases are more than 20 incidents where British troops fired on civilians, resulting in 46 people being killed or injured. The documents contain allegations that a detachment of British troops repeatedly shot civilians in the streets of Kabul in one month of 2007, and that commandos shot innocent civilians on eight occasions in Helmand province in 2008.

One incident, on 15 October 2008, saw a platoon commander from 45 Commando Royal Marines shoot a seven-year-old boy who died from his wounds five days later. The soldier had fired “an aimed warning” shot at what he claimed was a “young man ‘dicking’ [spying on] the patrol”. Other cases include a US patrol machine-gunning a bus, wounding or killing 15 of its passengers; and, in 2007, Polish troops directing mortar fire against a village, killing members of a wedding party – including a pregnant woman.

One report details an incident where a compound was bombed in an attempt to kill a “high-value individual”, after “ensuring there were no innocent Afghans in the area”. A US commander reported that 150 Taliban had been killed. But locals reported up to 300 civilians had died. Civilian casualties continue to mount as fighting intensifies. Just over a week ago, at least 45 civilians were killed by a Nato rocket attack on a town in Helmand.

The death of innocent civilians, whether by accident or design, goes some way towards explaining why the coalition is failing to win hearts and minds. A compelling example of the depth to which some Afghans are opposed to what they view as a foreign occupation is the incident where an American patrol was lured into a deadly ambush by villagers in Ganjigal, eastern Afghanistan, in September last year. Four US soldiers died. A report says soldiers stated: “They had eyewitness accounts of children in the village firing at the CF ground unit… and women assisting to resupply ammunition.”

Coalition forces are faced with a ruthless enemy that is unfettered by “rules of engagement” and totally unaccountable for its actions. The WikiLeaks documents reveal not only a huge rise in the Taliban’s use of improvised explosive devices since 2004 (up from around 300 to 7,155 last year), but an attempt to kill coalition forces by poisoning their drinking water with cyanide in October 2009.

Another document reveals how a three-year-old child was murdered by the Taliban and left in a rubbish bag on the steps of the Afghan Women’s Council. A report in June 2007 stated: “The deceased child [of a student] was placed in a garbage bag in front of the Women’s Council. This was to display dislike for the female student attending classes.”

Defence chiefs were warned of the fatal vulnerability of the lightly armoured “Snatch” Land Rovers used by British forces in Iraq three years before ministers were told the vehicles must be replaced, The Independent on Sunday can reveal.

It emerged last week that a British general told the Government in July 2006 that front-line commanders wanted better-protected vehicles so they could carry out missions “without unnecessary casualties”.

But an internal Ministry of Defence report shows that only weeks into the conflict, in 2003, members of the Royal Military Police (RMP) complained about the “risk” they had faced travelling in Snatch and the need for vehicles that offered better protection.

As many as 19 UK personnel were killed in the vehicles, in Iraq and Afghanistan, during the intervening period.

The IoS established that, in the post-operational report submitted by 1 (UK) Armoured Division on its return from the Iraq conflict, the RMP stated the need for protected vehicles which “would allow them to operate further forward (they did deploy forward in soft-skinned vehicles at risk)”.

It added that “the necessity… to be equipped with protected vehicles was demonstrated repeatedly throughout the operation” and that “at times [personnel]… driving Land Rovers were placed in range of enemy… fire”.

Rose Gentle, whose soldier son Gordon was blown up in a Land Rover in Iraq in 2004, said: “If they had heeded the warnings, none of these lads would have had to get into one of those vehicles again.”