– The curse of Fallujah: Women warned not to have babies because of rise in birth defects since U.S. assault (Daily Mail)

I am repeating myself here, but …

Don’t tell me that DU can be shielded by a piece of paper and is therefore no danger to health.

How long can you hold your breath or live without food and water?

The elite criminals that control the US have destroyed Iraq forever. Even Hitler, Stalin and Mao begin to pale against such a crime against humanity. 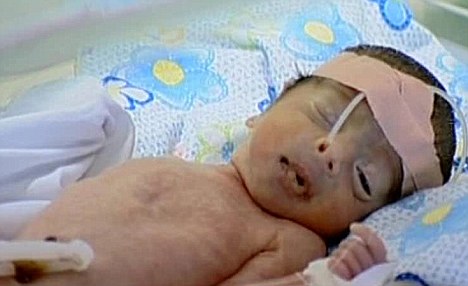 The Iraqi city of Fallujah continues to suffer the ghastly consequences of a US military onslaught in late 2004.

According to the authors of a new study, “Cancer, Infant Mortality and Birth Sex-Ratio in Fallujah, Iraq 2005–2009,” the people of Fallujah are experiencing higher rates of cancer, leukemia, infant mortality, and sexual mutations than those recorded among survivors in Hiroshima and Nagasaki in the years after those Japanese cities were incinerated by US atomic bomb strikes in 1945.

The epidemiological study, published in the International Journal of Environmental Studies and Public Health (IJERPH), also finds the prevalence of these conditions in Fallujah to be many times greater than in nearby nations.

The assault on Fallujah, a city located 43 miles west of Baghdad, was one of the most horrific war crimes of our time. After the population resisted the US-led occupation of Iraq—a war of neo-colonial plunder launched on the basis of lies—Washington determined to make an example of the largely Sunni city. This is called “exemplary” or “collective” punishment and is, according to the laws of war, illegal.

The new public health study of the city now all but proves what has long been suspected: that a high proportion of the weaponry used in the assault contained depleted uranium, a radioactive substance used in shells to increase their effectiveness.

In a study of 711 houses and 4,843 individuals carried out in January and February 2010, authors Chris Busby, Malak Hamdan, Entesar Ariabi and a team of researchers found that the cancer rate had increased fourfold since before the US attack five years ago, and that the forms of cancer in Fallujah are similar to those found among the Hiroshima and Nagasaki atomic bomb survivors, who were exposed to intense fallout radiation.

Strikingly, after 2005 the proportion of girls born in Fallujah has increased sharply. In normal populations, 1050 boys are born for every 1000 girls. But among those born in Fallujah in the four years after the US assault, the ratio was reduced to 860 boys for every 1000 female births. This alteration is similar to gender ratios found in Hiroshima after the US atomic attack of 1945.

The most likely reason for the change in the sex ratio, according to the researchers, is the impact of a major mutagenic event—likely the use of depleted uranium in US weapons. While boys have one X-chromosome, girls have a redundant X-chromosome and can therefore absorb the loss of one chromosome through genetic damage.

“This is an extraordinary and alarming result,” said Busby, a professor of molecular biosciences at the University of Ulster and director of scientific research for Green Audit, an independent environmental research group. “To produce an effect like this, some very major mutagenic exposure must have occurred in 2004 when the attacks happened. We need urgently to find out what the agent was. Although many suspect uranium, we cannot be certain without further research and independent analysis of samples from the area.”

Busby told an Italian television news station, RAI 24, that the “extraordinary” increase in radiation-related maladies in Fallujah is higher than that found in the populations of Hiroshima and Nagasaki after the US atomic strikes of 1945. “My guess is that this was caused by depleted uranium,” he said. “They must be connected.”

The US military uses depleted uranium, also known as spent nuclear fuel, in armor-piercing shells and bullets because it is twice as dense as lead. Once these shells hit their target, however, as much as 40 percent of the uranium is released in the form of tiny particles in the area of the explosion. It can remain there for years, easily entering the human bloodstream, where it lodges itself in lymph glands and attacks the DNA produced in the sperm and eggs of affected adults, causing, in turn, serious birth defects in the next generation.

The research is the first systematic scientific substantiation of a body of evidence showing a sharp increase in infant mortality, birth defects, and cancer in Fallujah.

In October of 2009, several Iraqi and British doctors wrote a letter to the United Nations demanding an inquiry into the proliferation of radiation-related sickness in the city:

“Young women in Fallujah in Iraq are terrified of having children because of the increasing number of babies born grotesquely deformed, with no heads, two heads, a single eye in their foreheads, scaly bodies or missing limbs. In addition, young children in Fallujah are now experiencing hideous cancers and leukemias.…

“In September 2009, Fallujah General Hospital had 170 newborn babies, 24 percent of whom were dead within the first seven days, a staggering 75 percent of the dead babies were classified as deformed.…

“Doctors in Fallujah have specifically pointed out that not only are they witnessing unprecedented numbers of birth defects, but premature births have also considerably increased after 2003. But what is more alarming is that doctors in Fallujah have said, ‘a significant number of babies that do survive begin to develop severe disabilities at a later stage.’” (See: “Sharp rise in birth defects in Iraqi city destroyed by US military”)

The Pentagon responded to this report by asserting that there were no studies to prove any proliferation of deformities or other maladies associated with US military actions. “No studies to date have indicated environmental issues resulting in specific health issues,” a Defense Department spokesman told the BBC in March. There have been no studies, however, in large part because Washington and its puppet Baghdad regime have blocked them.

The history of the atrocity committed by American imperialism against the people of Fallujah began on April 28, 2003, when US Army soldiers fired indiscriminately into a crowd of about 200 residents protesting the conversion of a local school into a US military base. Seventeen were killed in the unprovoked attack, and two days later American soldiers fired on a protest against the murders, killing two more.

This intensified popular anger, and Fallujah became a center of the Sunni resistance against the occupation—and US reprisals. On March 31, 2004, an angry crowd stopped a convoy of the private security firm Blackwater USA, responsible for its own share of war crimes. Four Blackwater mercenaries were dragged from their vehicles, beaten, burned, and hung from a bridge over the Euphrates River.

The US military then promised it would pacify the city, with one unnamed officer saying it would be turned into “a killing field,” but Operation Vigilant Resolve, involving thousands of Marines, ended in the abandonment of the siege by the US military in May, 2004. The victory of Fallujah’s residents against overwhelming military superiority was celebrated throughout Iraq and watched all over the world.

The Pentagon delivered its response in November 2004. The city was surrounded, and all those left inside were declared to be enemy combatants and fair game for the most heavily equipped killing machine in world history. The Associated Press reported that men attempting to flee the city with their families were turned back into the slaughterhouse.

In the attack, the US made heavy use of the chemical agent white phosphorus. Ostensibly used only for illuminating battlefields, white phosphorus causes terrible and often fatal wounds, burning its way through building material and clothing before eating away skin and then bone. The chemical was also used to suck the oxygen out of buildings where civilians were hiding.

Washington’s desire for revenge against the population is indicated by the fact that the US military reported about the same number of “gunmen” killed (1,400) as those taken alive as prisoners (1,300-1,500). In one instance, NBC News captured video footage of a US soldier executing a wounded and helpless Iraqi man. A Navy investigation later found the Marine had been acting in self-defense.

Fifty-one US soldiers died in 10 days of combat. The true number of city residents who were killed is not known. The city’s population before the attack was estimated to be between 425,000 and 600,000. The current population is believed to be between 250,000 and 300,000. Tens of thousands, mostly women and children, fled in advance of the attack. Half of the city’s building were destroyed, most of these reduced to rubble.

Like much of Iraq, Fallujah remains in ruins. According to a recent report from IRIN, a project of the UN Office for the Coordination of Humanitarian Affairs, Fallujah still has no functioning sewage system six years after the attack. “Waste pours onto the streets and seeps into drinking water supplies,” the report notes. “Abdul-Sattar Kadhum al-Nawaf, director of Fallujah general hospital, said the sewage problem had taken its toll on residents’ health. They were increasingly affected by diarrhea, tuberculosis, typhoid and other communicable diseases.”

The savagery of the US assault shocked the world, and added the name Fallujah to an infamous list that includes My Lai, Sabra-Shatila, Guérnica, Nanking, Lidice, and Wounded Knee.

But unlike those other massacres, the crime against Fallujah did not end when the bullets were no longer fired or the bombs stopped falling.

The US military’s decision to heavily deploy depleted uranium, all but proven by “Cancer, Infant Mortality and Birth Sex-Ratio in Fallujah,” was a wanton act of brutality, poisoning an entire generation of children not yet born in 2004.

The Fallujah study is timely, with the US now preparing a major escalation of the violence in Afghanistan. The former head of US Afghanistan operations, General Stanley McChrystal, was replaced last month after a media campaign, assisted by a Rolling Stone magazine feature, accused him, among other things, of tying the hands of US soldiers in their response to Afghan insurgents.

We have shot an amazing number of people, but to my knowledge, none has ever proven to be a threat.” Source: New York Times

McChrystal was replaced by General David Petraeus, formerly head of the US Central Command. Petraeus has outlined new rules of engagement designed to allow for the use of disproportionate force against suspected militants.

Petraeus, in turn, was replaced at Central Command by General James “Mad Dog” Mattis, who played a key planning role in the US assault on Fallujah in 2004. Mattis revels in killing, telling a public gathering in 2005 “it’s fun to shoot some people…. You know, it’s a hell of a hoot.”

– The Weapon of Mass Destruction Is Cancer

– IRAQ: ‘Special Weapons’ Have a Fallout on Babies