Regular use of a mobile phone for more than four years almost doubles the chance of developing tinnitus – the debilitating condition that causes constant ringing or buzzing in the ears. 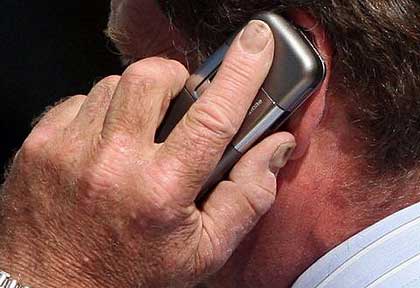 It is thought the microwave energy produced by the phones might be the cause of the problem.

A study has found that people who used their mobile phone for an average of ten minutes a day were more than 70 per cent more likely to have tinnitus.

But those who used their phones on both ears, and those who had used a mobile for four years or more were twice as likely to have tinnitus.

The findings area published in the journal Occupational and Environmental Medicine and may help to explain why the number of people reporting tinnitus is increasing.

It is thought the microwave energy produced by the phones might be the cause of the problem.

Dr Hans-Peter Hutter, Institute of Environmental Health, at, University of Vienna, in Austria compared 100 people with tinnitus to 100 similar people without the condition.

He said that although they relied on people reporting their own mobile phone use and could not be sure if this was accurate, the results were ‘unlikely to be spurious’.

Tinnitus affects around five million people in Britain and is considered a debilitating condition as sufferers may constantly hear a rushing, roaring or high pitched tone in one or both ears most of the time.

The most common cause is damage to the hearing through trauma or exposure to loud noise, however some mental or physical changes can trigger it such as depression, redundancy and illness.

Dr Hutter added: “Tinnitus strongly interferes with the daily lives of people. There are very few interventions available that effectively reduce tinnitus loudness and annoyance. Therefore, all measures should be taken to avoid any further increase in tinnitus prevalence.

“Our results indicate that high intensity and long duration of mobile phone use might be associated with tinnitus. This possibility should be explored further by assessing mobile phone usage history in studies of tinnitus aetiology (cause) in the future.”