The Bank of International Settlements is the central banks of central banks controlled by the same elite criminals that have created the entire financial crisis.

Whatever game they can play to suppress the ‘price of gold’ – their greatest enemy – they will do it..

Interestingly enough this article mentions the Baltic Dry Index, which has been a really good indicator of what is coming, because it cannot be manipulated (that easily). Prepare for collapse.

It takes a lot to spook the solid old gold market. But when it emerged last week that one or more banks had lent 380 tonnes of gold to the Bank of International Settlements in return for foreign currencies, there was widespread surprise and confusion 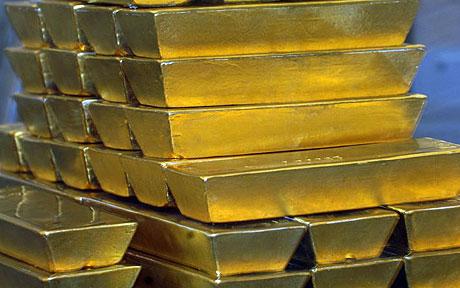 The news that a mystery bank has just pawned the family jewels gave traders a jolt – nervous about the sudden transfer of almost 20pc of the world’s annual gold production and the possibility of a sell-off.

In a tiny footnote in its annual report, the bank disclosed its unusually large holding of gold, compared with nothing the year before. The disclosure was a large factor in the correction of the gold price this week, which fell below $1,200 for the first time in more than a month.

Concerns hinged on whether the BIS could potentially sell on this vast cache of bullion in the event of a default, flooding the market with liquidity. It appears to have raised $14bn for whoever’s been doing the swapping – small fry on the currency markets, but serious liquidity in the gold market.

Denominated in euros, gold has fallen 8pc since the beginning of the month and is now trading at a seven-week low of €937 per troy ounce.

The big gold exchange traded funds (ETFs) – having peaked at record inflows in May – have also been showing net outflows over the past few days.

Meanwhile, economists and gold market-watchers were determined to hunt down which bank is short of cash – curious about who is using their stash of precious metal for what looks suspiciously like a secret bailout.

At first it looked like the BIS was swapping gold with a troubled central bank. After all, the institution is the central bankers’ bank and its purpose to conduct transactions with national monetary authorities.

Central banks in the troubled southern zone of Europe were considered the most likely perpetrators.

According to the World Gold Council, central banks in Greece, Spain and Portugal held 112.2, 281.6 and 382.5 tons of gold respectively in June – leading analysts to point fingers at Portugal, or a combination of the three.

But Edel Tully, an analyst from UBS, noted that eurozone central banks would be severely limited with what they could do with the influx of extra cash – unable to transfer it straight to governments or make use of the primary bond markets.

She then listed the only other potential monetary authorities with enough gold as the US, China, Switzerland, Japan, Russia, India and Taiwan – and the International Monetary Fund.

This led to musings that the counterparty was the IMF, making sense because the lender of last resort is historically prone to cash shortages and has been quietly selling off gold in the first half of the year.

Renowned gold expert Jim Sinclair adopted this explanation. The panic came when people mistook a lease for a swap, he argues. Far from being a big release of gold into the market, it is simply a commercial arrangement between the IMF and BIS with a favourable rate of interest paid for the foreign currency.

“Gold swaps are usually undertaken by monetary authorities,” he writes on his industry blog, MineSet. “The gold is exchanged for foreign exchange deposits with an agreement that the transaction be unwound at a future time at an agreed price.

“The IMF will pay interest on the foreign exchange received. Historically swaps occur when entities like the IMF have a need for foreign exchange, but do not wish to sell the gold. In this case, gold is a leveraging device for needed currency to meet requirements.

“The many reports that characterise the large IMF gold swap as a sale of gold into the markets do not understand the difference between a swap and a lease.”

However, the day after original reports about the swaps, BIS emailed a statement saying that the swaps had not been conducted with monetary authorities but purely with commercial banks.

This did nothing to quell the sense of mystery surrounding the deal or deals. It is almost inconceivable that a single commercial bank could have accumulated so much gold alone. And cynics have suggested that the whole affair still looks like a secretive European bailout that a single country wants to keep quiet.

In this case, one or more of the so-called bullion banks – which act as wholesale market-makers and include Goldman Sachs, Deutsche Bank, JP Morgan, HSBC, Barclays, UBS, Societe Generale, Mitsui and the Bank of Nova Scotia – would have agreed to act on behalf of a monetary authority.

Analysts for Commerzbank note that in the meantime, “The price of gold is tending weaker at present.”

The Baltic Dry Index, a measure of commodity shipping costs, has fallen for the longest period in nine years, due to lower volumes of iron ore being shipped to China.

Surplus steel means manufacturers are relying on stockpiles, rather than shipping in iron ore from abroad.

The index of freight rates on international trade routes fell 38 points, or 2pc, to 1,902 points on Friday in its 31st straight decline.

Charter rates for all types of ships fell.

European cocoa buyers are so concerned about potential speculation in the market that they have written to the London commodities exchange threatening to move their trade to America.

Talks between industry participants and Liffe, the London exchange operator, will take place this week, following concerns about the price spike in June.

Futures hit a 32-year high, amid lower production due to diseased crops in Africa and higher demand.

Those who signed the letter claim there has been excessive speculation by hedge funds and want greater transparency about who is buying what and how much.