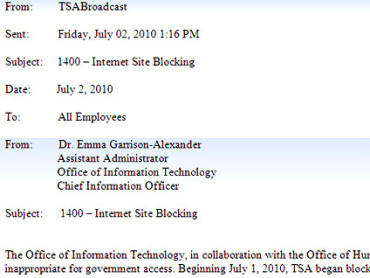 The Transportation Security Administration (TSA) is blocking certain websites from the federal agency’s computers, including halting access by staffers to any Internet pages that contain a “controversial opinion,” according to an internal email obtained by CBS News.

The email was sent to all TSA employees from the Office of Information Technology on Friday afternoon.

It states that as of July 1, TSA employees will no longer be allowed to access five categories of websites that have been deemed “inappropriate for government access.”

The email does not specify how the TSA will determine if a website expresses a “controversial opinion.”

There is also no explanation as to why controversial opinions are being blocked, although the email stated that some of the restricted websites violate the Employee Responsibilities and Conduct policy.

The TSA did not return calls seeking comment by publication time.