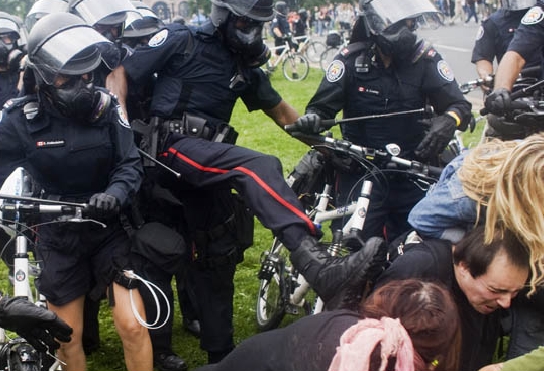 Why? Maybe that gives you an idea:

(Toronto Sun) — Who made the decision for police to stand down despite the fact the city was under attack?

Was it a police decision or political?

These should be the cornerstone questions of an external review surrounding the chaos of the G20.

After all, police officers were trained to stop the Black Bloc anarchists, were appropriately equipped and massively manned.

As downtown Toronto witnessed burning police cars and a small group of thugs on a rampage, a police source tells me the only thing that stopped the officers from doing that was an order telling them not to. They tell me they could have rounded up all, or most of them, in no time.

I have had several frontline police officers tell me they were told not to get involved. But even before that decision was made, says one insider, there was mass confusion and indecision.

The officer said that eventually there was “a clear order from the command centre saying ‘Do not engage’ ” and, at that point, smelling weakness and no repercussions, the downtown was effectively turned over to the vandals while police, up to 19,000 strong, were ordered to stay out of it.

Four police cars were destroyed and dozens of other properties were damaged.

“It was awful,” said an officer. “There were guys with equipment to do the job, all standing around looking at each other in disbelief … The Montreal riot guys were livid … They just wanted to get in there and do the job but were told they are too intimidating.”

So who made that order?

The inevitable inquiry, separate from the announced internal police review, will have to address this and a whole lot of other things. For example, why were a record 1,000 arrests made a day after the actual incident where very few arrests were made during it?

How many convictions will there be? Could police have had more mobile officers? Should they have been in bigger numbers on Yonge St.?

Was it necessary to place people, some reportedly not even adults, in temporary cages without a bed and open toilet for a so-called breach of the peace?

Was it appropriate to point weapons at protesters or even fire them? Was it constitutional to corral and hold hundreds of innocent people at Queen St. and Spadina Ave.?

Curiously, Blair didn’t take as hard a stand a year before when the Tamil Tiger supporters not only controlled University Ave. for four days but also took over the Gardiner Expressway.

“Miller wouldn’t have let him as they are terrified to be called racist,” said one copper.

Toronto Police so far have offered no apologies for the bizare incident at Queen and Spadina, but my sources say that may be the easiest option for them.

“The chief is rattled because he knows that circus at Spadina and Queen was unlawful and it is going to come back to bite him in the ass,” said one copper. “If one of us had detained people like that, we would be hammered with Police Act charges.”

If it’s deemed criminal, who investigates? The very people who ordered it?

With or without a probe, suggestions everybody in the vicinity of a heated protest is complicit or a co-conspirator is almost as embarrassing as Saturday’s standoff.

Many would like to know why they were so lenient originally on the real bad guys and later how heavy-handed on the rest?

Meanwhile, the blooper reel keeps on rolling, as illustrated so well by the underwhelming arsenal Blair trotted out Tuesday of the kind of stuff you’d find in someone’s garage.

When called on it, the chief even had to admit the most menacing items on the table — a crossbow and chainsaw — weren’t even related to the G20, even though no one removed them for the media pictures.

Who knows what’s real any more?

One thing that did appear real was a police video surveillance image of the actual bad guys all huddled together in black clothing prior to the destruction.

Why didn’t police brass act right then and there? After all there were only a few dozen of them against 19,000 strong.

This picture shows the police brass knew the location of the real culprits and were tracking their movements. Why didn’t they let their people just nab them right there with the same zero tolerance Toronto has for parking violations?

Perhaps there are enough people out there who’d also like to know?