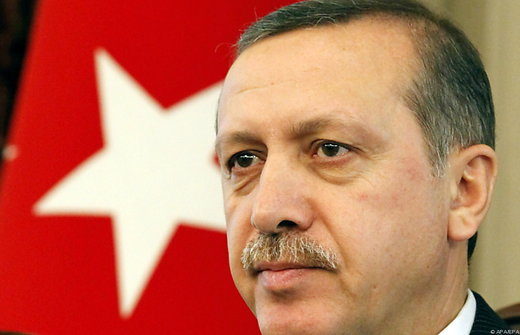 Turkey’s prime minister, Recep Tayyip Erdogan, said today that Kurdish militants would “drown in their own blood” as he led political and army chiefs in paying his respects to troops killed in a clash with the rebels during fighting on Saturday. Eleven soldiers and 12 Kurdistan Workers’ party (PKK) guerrillas died in the south-eastern province of Hakkari, near the Iraq border.

At a ceremony in the city of Van, Erdogan said: “I say here very clearly, they will not win. They will gain nothing. They will melt away in their own darkness … they will drown in their own blood.” The death toll in Saturday’s clash was one of the highest in recent years in a conflict which has killed more than 40,000 since the PKK took up arms against the state in 1984 with the aim of creating a homeland in the south-east.

Separatist violence generally increases in south-east Turkey in the spring as the guerrillas cross the border from Iraq and there has been a notable escalation in the last two months.

The PKK, branded terrorists by Turkey, the United States and the European Union, said this month they had scrapped a year-old unilateral ceasefire and resumed attacks against Turkish forces because of military operations against them.

The ceasefire had come as Erdogan’s government worked on plans to boost Kurdish rights to help end the conflict. However, the process has faltered and it suffered a setback in December when the constitutional court banned the pro-Kurdish Democratic Society party (DTP) over links to the PKK.