– Mike Krieger: This Is The Last Dance:

They refuse to allow the yuan to strengthen because they know that once they do that it will mark the real end of the dollar era. So instead they are spending like crazy on infrastructure ahead of them allowing the dollar to plunge.  Then the strong yuan will be employed to purchase all the commodities they need to utilize their infrastructure and the OECD gets priced out. To those that talk about yuan devaluation, you need to be specific.  Devaluation versus what?  Versus commodities generally along with other currencies?  I can buy that argument very easily.  Versus the dollar, highly doubtful.  Why? The latest data says China owns $877.5 billion in U.S. treasuries. All they have to do is start dumping and the dollar is finished as the Fed will be forced to print so many dollars it will make Mugabe blush.  People need to wake up.

(Mike Krieger, formerly a macro analyst at Bernstein, and currently running his own fund, KAM LP, summarizies the pretend reality we are all caught in now, knowing full well America is set on a crash course with reality at some point, yet sticking our collective heads in the sand, as the collapse will be some time in the “indefinite” future. In the meantime, banks will continue to boost US GDP by peddling “financial innovation” and restructuring advice to countries like Greece… and nothing else.) 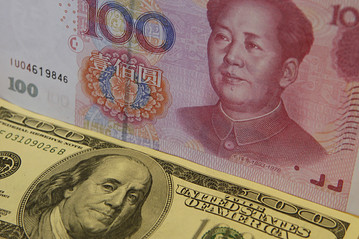 “If it leads to appreciation for the yuan, it’s good news for the market,” Hao Hong, global equity strategist for CICC in Beijing, said in a report today. “Investors will want to get into Chinese assets because they will be worth more. It will also deflect political criticism and help stem inflation.”

The People’s Bank of China said yesterday that it will “increase the renminbi’s exchange-rate flexibility” after the economy improved. Officials have kept the yuan, also known as the renminbi, at about 6.83 per dollar since July 2008, aiding the nation’s exporters and fueling tensions with trade partners.

A stronger yuan would aid Chinese companies by boosting their purchasing power, while the likelihood of the currency appreciating is an incentive for foreign investors to buy yuan- denominated stock, Glenn Maguire, a Hong Kong-based economist for the French bank, said in a phone interview today.

“It’s probably going to be a positive for the A-share market,” Maguire said. “It makes A-share valuations look more attractive,” he said, declining to estimate how much shares may gain. The local-currency A-shares rose in 2005 when China revalued its currency, he added.

The Shanghai Composite Index has tumbled 23 percent this year as the government pares stimulus measures and Europe’s sovereign-debt crisis adds to the risk of a renewed global slump. In 2005, the benchmark, which covers both A shares and foreign- currency B shares, rose 2.5 percent on July 22, the day after the government revalued the currency.

“Almost all of our sales are on the domestic Chinese market and we purchase a great deal of raw oil for processing from overseas,” spokesman Huang Wensheng said by phone. “If the ability of domestic consumers to take on higher costs increases and the cost of our overseas purchases decreases, then the result for us is an obvious one.”

CICC’s Hao expects airlines and paper producers to benefit most from possible yuan appreciation, saying it will reduce the cost of raw materials such as fuel oil and pulp. CICC was the top-ranked brokerage for China research in the annual survey by Asiamoney magazine.

Shares of raw-material importers such as Sinopec, and companies with dollar-denominated debt, such as China Southern Airlines Co., gained in trading after the revaluation in 2005.

The situation this year isn’t entirely the same. The central bank’s announcement yesterday that it will scrap an effective peg to the dollar didn’t include a one-off gain for the currency. In 2005, the yuan immediately rose 2.1 percent as part of a policy shift.

The latest policy shift may support the currencies of Taiwan, South Korea and Australia, economies closely linked to China, over the rest of this year, Maguire said. A stronger currency because of “gradual” appreciation will boost the country’s purchasing power, he said.

To contact Bloomberg News staff for this story: Paul Panckhurst at +86-10-6649-7574 or ppanckhurst@bloomberg.net