Saudi Arabia has conducted tests to stand down its air defences to enable Israeli jets to make a bombing raid on Iran’s nuclear facilities, The Times can reveal. 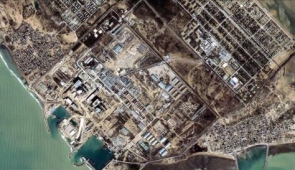 Satellite image of the Iranian nuclear reactor at Bushehr, January 3, 2002

Saudi Arabia would not allow Israeli bombers to pass through its airspace en route to a possible strike of Iran’s nuclear facilities, a member of the Saudi royal family said Saturday, denying an earlier Times of London report.

Earlier Saturday, the Times reported that Saudi Arabia has practiced standing down its anti-aircraft systems to allow Israeli warplanes passage on their way to attack Iran’s nuclear installations, adding that the Saudis have allocated a narrow corridor of airspace in the north of the country.

Prince Mohammed bin Nawaf, the Saudi envoy to the U.K. speaking to the London-based Arab daily Asharq al-Awsat, denied that report, saying such a move “would be against the policy adopted and followed by the Kingdom.”

According to Asharq al-Awsat report, bin Nawaf reiterated the Saudi Arabia’s rejection of any violation of its territories or airspace, adding that it would be “illogical to allow the Israeli occupying force, with whom Saudi Arabia has no relations whatsoever, to use its land and airspace.”

Earlier, the Times quoted an unnamed U.S. defense source as saying that “the Saudis have given their permission for the Israelis to pass over and they will look the other way.

“They have already done tests to make sure their own jets aren’t scrambled and no one gets shot down. This has all been done with the agreement of the [U.S.] State Department.”

Once the Israelis had passed, the kingdom’s air defenses would return to full alert, the Times said.

Despite tensions between them, Israel and Saudi Arabia share a mutual hostility to Iran.

“We all know this. We will let them [the Israelis] through and see nothing,” the Times quoted a Saudi government source as saying.

According to the report, the four main targets for an Israeli raid on Iran would be uranium enrichment facilities at Natanz and Qom, a gas storage development at Isfahan and a heavy-water reactor at Arak.

Secondary targets may include a Russian-built light water reactor at Bushehr, which could produce weapons-grade plutonium when complete.

Even with midair refueling, the targets would be as the far edge of Israeli bombers’ range at a distance of some 2,250km. An attack would likely involve several waves of aircraft, possibly crossing Jordan, northern Saudi Arabia and Iraq.

Aircraft attacking Bushehr, on the Gulf coast, could swing beneath Kuwait to strike from the southwest, the Times said.

Passing over Iraq would require at least tacit consent to the raid from the United States, whose troops are occupying the country. So far, the Obama Administration has refused this.

On Wednesday the United Nations passed a fourth round of sanctions against Iran in an attempt to force it to stop enriching uranium. But immediately after the UN vote, Iranian President Mahmoud Ahmadinejad vowed the nuclear program would continue.

Israel hailed the vote – but said sanctions were not enough and Prime Minister Benjamin Netanyahu has refused to rule out a raid.