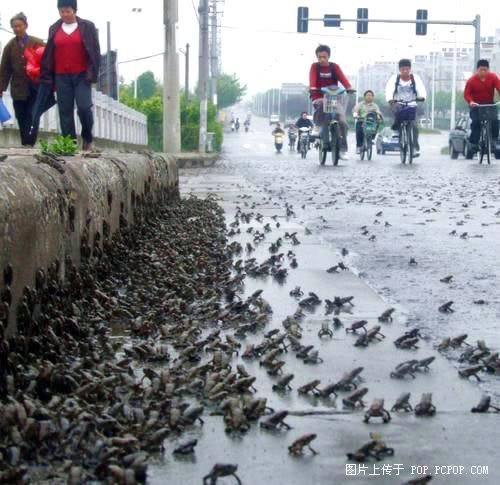 May 9th, 2008 thousands of toads cross road near area where earthquake struck on May 12th in Sichuan China

Thessaloniki, May 26 (THAINDIAN NEWS) There was a flood of frogs on a highway in Greece, which has managed to close down the highway for hours. Greek officials confirmed that one of the critical northern highways was closed for a couple of hours, due to the unexpected swarm of frogs.

According to reports, the traffic on the highway was affected due to the ‘flood of the frogs’ and three car drivers also skidded away from the road, when they tried to swerve their car in order to avoid hitting the frogs present on the road. However fortunately no causalities were reported, due to the invasion of the road by the frogs.

It is still not clear, as to why there was a flood of millions of frogs on the road, but the traffic police chief Giorgos is speculating that one of the reasons could be the lack of food at their place of inhabitation.