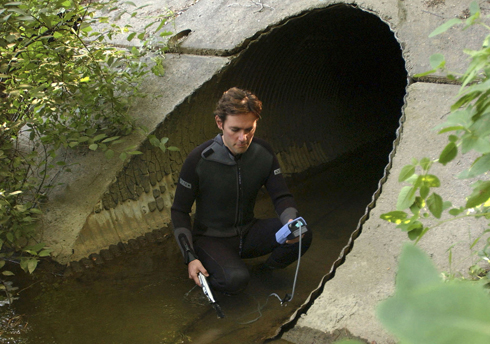 It happened for Marc Edwards, a lean, intense Virginia Tech environmental engineering professor. Drawing on what he called his own “world-class stubbornness,” he mounted a six-year campaign that succeeded last week in forcing the federal Centers for Disease Control and Prevention to admit that it had misled the public about the risk of lead in the District’s drinking water.

The CDC, which is the nation’s principal public health agency, made the confession in a “Notice to Readers” published in an official weekly bulletin Friday. It came a day after a scathing House subcommittee report said the agency knowingly used flawed and incomplete data when it assured D.C. residents in 2004 that their health hadn’t been hurt by spikes in lead in the drinking water.

The events represented a full vindication for Edwards. He had embarked on the painstaking, solo investigation primarily because he was outraged that the CDC’s original report was being used across the country as a reason to relax concern about lead in the water. Now he has the House report to back up his research.

“Until yesterday, I didn’t really feel I had what I needed to prevent future harm,” Edwards, 46, said in an interview at a downtown D.C. coffee shop Friday. “I feel a sense of relief, and I’m appalled at how difficult it was.”

It’s not a final victory yet. Edwards thinks the CDC is still trying to “rewrite history” by refusing to admit that it consciously understated the lead risk in water. He thinks it did so because it was worried about distracting the public from another health risk, leaded paint, which has long been a CDC priority.

Other experts think that’s plausible but see other possible explanations as well. Perhaps the CDC just did slapdash research and rushed out a report prematurely because of pressure at the time to respond to the D.C. water crisis. Then, like any bureaucracy, the agency turned defensive and resisted admitting error when Edwards started picking apart its data and analysis.

“I don’t know if it was sloppy on their part [or] if somebody twisted their arm to see it come out this way,” said James Elder, former national director of groundwater and drinking water for the Environmental Protection Agency.

In any case, Elder said, Edwards gets credit for holding the agency to account. “Had Edwards not gotten involved, this would never have come out,” he said.

Edwards’s effort cost him thousands of hours away from his young family in Blacksburg. Officials at the CDC and the EPA tried to smear his professional reputation, dismissing him as just an engineer rather than a qualified health professional.

For a while, the crusade cost Edwards money as well. In 2004, he passed up a $100,000 EPA contract to consult on the issue, because he felt that he would be working for the wrong side. He put his family in debt by spending tens of thousands of dollars, mostly on fees for endless Freedom of Information Act requests to get data critical to his research.

“It’s something I took on not quite as a hobby, but more as a curse that I was carrying around all those years,” Edwards said.

His finances turned around when the work unexpectedly won him a $500,000 MacArthur “genius” grant in 2007. Those are the ones where you don’t have to do anything. They just give you the money.

Other rewards have also materialized. He has become a popular speaker at universities, including Princeton and West Point. Villanova gave him an ethics award.

Edwards said the key breakthrough came in early 2008. That’s when he finally persuaded Children’s National Medical Center to share data so he could do an independent study of lead levels in D.C. children’s blood samples. The CDC and other agencies were refusing to provide him with such information.

Once he had the data, Edwards said, “it took me all of an hour to see that something very bad had happened to D.C.’s children.” Blood lead levels had risen to dangerous levels, at least partly because of previously reported increases in lead levels in the drinking water. That meant hundreds or thousands of children suffered reduced IQ and organ damage, he said.

It took several months of number-crunching to establish a scientifically valid link between lead in the blood and lead in the water. It led to an award-winning research paper published in January 2009.

That study blew a hole in the CDC’s 2004 report. The agency had said “no children” were identified with elevated, unsafe blood levels, “even in homes with the highest water lead levels.”

The CDC now concedes that its scientific credibility has suffered a blow. It blames the problem largely on poor writing in the report. “Looking backward six years, it’s clear that this report could have been written a little better,” said Tom Sinks, deputy director of the CDC’s national center for environmental health.

Edwards said the CDC is still trying to hide its misdeeds. “There’s a lot of lessons here for how science can go awry, how bureaucracies can use science to hide the truth,” Edwards said.

That’s why society still needs knights-errant like Edwards. Nowadays, they wield a laptop instead of a lance.