The elite has created the entire global financial crisis (looting/stealing the wealth from the people and destroying their children’s future) and now as I said before they present you their New World Order as the one and only solution to all the problems that they have created. The New World Order will rape the people of all their freedoms and wealth left, turning them into slaves. The New world Order is now here.

The elite will stop at nothing to press through with their agenda. They will even create a massive terror attack:

I will add more recent info from Gerald Celente at the end of the following article.

Rise up (peacefully) or fall. 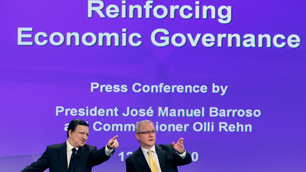 Senior administrators of the European Union proposed on Wednesday that they be given unprecedented power to scrutinize the spending plans of countries before national parliaments vote on those budgets.

The EU’s executive commission’s bid was a move to crack down on widespread government overspending and to begin to deal with the debt crisis that threatens the exchange value of the euro.

The commission is the administrative arm of the European Parliament and is independent of national governments.

It also proposed serious financial penalties for countries that break the rules – essentially forcing governments to pay a financial penalty that could eventually be returned to them.

The move came as European governments scramble to deal with their deficits.

Spain announced Wednesday it will cut civil servants’ salaries this year by an average of five per cent starting in June.

Prime Minister Jose Luis Rodriguez Zapatero also told parliament his government would suspend automatic inflation adjustments for civil service pensions, cut foreign aid and domestic spending by $7.6 billion US and eliminate a tax break for couples that have babies or adopt a child.

At the same time, Greece’s two main public and private sector unions announced a new general strike to protest pension reforms for May 20.

The proposal by the EU commission would deepen the ties that bind Europe’s currency union just when some analysts predict the debt crisis will eventually cause its disintegration.

The commission would need the backing of EU governments before it can draft more detailed rules for them to vote on and put in place.