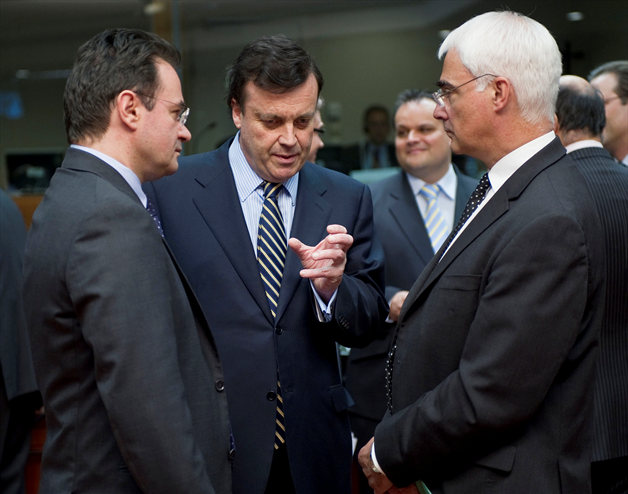 May 9 (Bloomberg) — European Union finance ministers pledged to stop a sovereign-debt crisis from shattering confidence in the euro as they held an emergency summit to hammer out a lending mechanism that may be worth around $645 billion.

Jolted into action by last week’s slide in the currency to a 14-month low and soaring bond yields in Portugal and Spain, leaders of the 16 euro nations agreed on the backstop yesterday and told ministers to get it ready before Asian markets open. The European facility may be worth around 500 billion euros, said an official familiar with the talks.

“We are going to defend the euro,” Spanish Economy Minister Elena Salgado told reporters as she arrived to chair today’s Brussels meeting. “We think we have a duty for more stability for our currency. We will do whatever is necessary.”

Europe’s failure to contain Greece’s fiscal crisis triggered a 4.3 percent drop in the euro last week, the biggest weekly decline since the aftermath of Lehman Brothers Holdings Inc.’s collapse. It prompted the U.S. and Asia to urge broader steps to prevent a debt crisis from pitching the world back into a recession.

President Barack Obama spoke by phone with German Chancellor Angela Merkel for the second time in three days, adding to the international pressure Europe has faced since a hurriedly arranged conference call of Group of Seven finance chiefs on May 7. Obama today emphasized “the importance of the members of the European Union taking resolute steps to build confidence in the markets,” White House spokesman Bill Burton told reporters in Hampton, Virginia.

“In the night, when the markets are opening, we cannot afford a disappointment,” said Finance Minister Anders Borg of Sweden, one of 11 EU nations not in the euro. “We now see herd behavior in the markets that are really pack behavior, wolfpack behavior.”

European officials declined to disclose the size of the stabilization fund, to be made up of money borrowed by the EU’s central authorities with guarantees by national governments. The meeting started just after 3 p.m.

Expectations of decisive action buoyed the euro as trading began in Asia. It jumped more than 1 percent to $1.2897 as of 6:11 a.m. in Sydney, according to pricing from Westpac Banking Corp.

Germany, the bloc’s largest economy, is being represented by Interior Minister Thomas de Maiziere after wheelchair-bound Finance Minister Wolfgang Schaeuble, 67, was rushed to a Brussels hospital due to an adverse reaction to new medication.

Part of a new lending mechanism could be based on the balance-of-payments aid model that the EU granted to Hungary, Romania and Latvia when their budgets buckled in the financial crisis, said Jacques Cailloux, chief European economist at Royal Bank of Scotland Group Plc in London. The initial funding available could be 70 billion euros, he said.

“There is some discussion about what the solution will be,” Dutch Finance Minister Jan Kees de Jager said. “There are several alternatives at the moment.”

“Europe is getting its act together,” said Chris Rupkey, chief financial economist at Bank of Tokyo-Mitsubishi UFJ Ltd. in New York. “Time will tell if this statement is enough to satisfy the European bond market vigilantes.”

Government officials said they won’t push the independent ECB to, for example, buy government bonds. President Jean-Claude Trichet accelerated the market selloff on May 6 by rejecting that measure. Trichet is in Basel, Switzerland, today for a scheduled meeting of central bankers from the Group of 10 nations. Vice President Lucas Papademos is attending the Brussels talks.

With the euro facing the stiffest test since its debut in 1999, the weekend turned into a crisis-management exercise to restore faith in the currency and prevent a European debt crisis from cascading around the world.

The purpose is to “decide on a mechanism that enables us to assure the stability of the euro, stability in the zone and, beyond that, stability in financial markets,” French Finance Minister Christine Lagarde said.

Britain, the EU’s third-largest economy, won’t contribute to a fund to shore up euro countries, though it backs efforts to restore stability, Chancellor of the Exchequer Alistair Darling said.

“When it comes to supporting the euro, that is for the eurogroup countries,” Darling told Sky News. “We need to show again today that by acting together we can stabilize the situation.”

At yesterday’s leaders’ summit in Brussels, Germany stepped up calls for a closer monitoring of government finances and more rigorous enforcement of the deficit-limitation rules.

The vow to push budget shortfalls below the euro’s 3 percent limit echoes promises that have been regularly broken ever since governments in 1999 set a three-year deadline for achieving balanced budgets. The euro region’s overall deficit is forecast at 6.6 percent of gross domestic product in 2010 and 6.1 percent in 2011.

Plans for a European credit-rating authority are already under consideration at the European Commission, the bloc’s Brussels-based executive agency. It also is investigating whether ratings companies such as Standard & Poor’s wield too much power over investors’ perceptions of governments.

Asked whether steps to stem speculation against government bonds would include restrictions on short sales or credit default swaps, European Commission President Jose Barroso said “some of the points you have mentioned will be contemplated.”

The political leadership of the $12 trillion economy yesterday also signed off on a 110 billion-euro ($140 billion) aid package for Greece negotiated by finance ministers last week. So far nine governments have cleared the way for funds to be sent to Athens.