Investors already were jittery about the ripple effects of the crisis in Greece when the market went into free fall at 2:42 p.m. By 2:47, the Dow Jones Industrial Average had crossed 10000 in the biggest intraday point drop in its history. By 3:07, the market had regained 500 points, ultimately staggering to a close at 10520.32, down 347.80 points.
…
Multiple stocks, ranging from Accenture PLC to Boston Beer Co., momentarily lost nearly 100% of their value, changing hands for just one penny. Exchange-traded funds, which are index funds that trade like stocks on exchanges, were also temporarily vaporized. The $9.5 billion iShares Russell 1000 Value Index Fund went from $59 to around 8 cents in the blink of an eye. 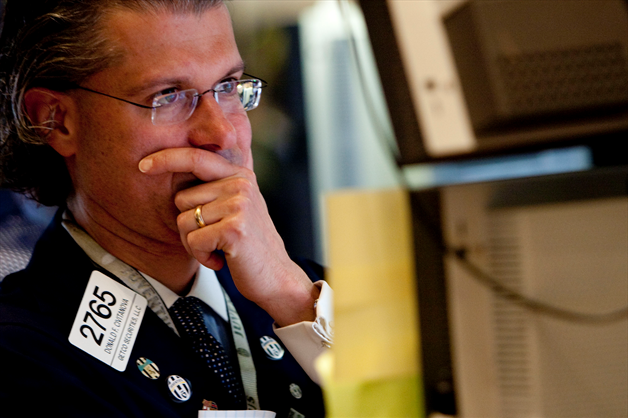 Donald Civitanova works at a post on the floor of the New York Stock Exchange in New York Photographer: Daniel Acker/Bloomberg

May 6 (Bloomberg) — Nasdaq OMX Group Inc. said it will cancel trades of 286 securities that fell or rose more than 60 percent from their prices at 2:40 p.m. New York time, just before U.S. equities plummeted.

The Dow Jones Industrial Average plunged almost 1,000 points before trimming its drop and ended down 347.80 points, or 3.2 percent, at 10,520.32. About $700 billion of U.S. stock- market value was wiped out in less than 10 minutes, according to data compiled by Bloomberg.

Nasdaq, which investigated trades between 2:40 p.m. and 3 p.m., said it didn’t find any technology or system issues that caused declines of as much as 99.9 percent in some shares. Citigroup Inc. may have been the firm that made an erroneous trade, CNBC said, citing “multiple sources.” New York-based Citigroup said it found “no evidence” of erroneous trades, and CME Group Inc. said the bank’s activity in CME stock index futures didn’t appear to be “irregular or unusual.”

“Somebody hits the wrong button and everybody heads through the same door at the same time,” said David Goerz, who oversees $17 billion as chief investment officer at Highmark Capital Management in San Francisco. “It clearly was a factor. When you have a lot of skepticism and nervousness in the market place, that just exacerbates the problem.”

Accenture Plc and Exelon Corp. were on Nasdaq’s list of companies and dropped more than 60 percent as U.S. equities tumbled, before recovering by the close. The list also included some bearish exchange-traded funds that surged as stocks fell.

The decision means that trades in Cincinnati-based Procter & Gamble Co., which slid as much as 37 percent for the biggest intraday drop in the Dow industrials, would stand. The world’s largest consumer products company said stock trades that pushed its shares down were probably an error.

Philip Morris International Inc. of New York, which sank as much as 96 percent to $2, also wasn’t included on the list of companies whose trades would be canceled.

Accenture, the second-biggest technology consulting company, fell more than 99 percent to a penny. All trades executed below $17.74 have been canceled, Bloomberg data showed. The stock closed down 2.6 percent at $41.09.

Exelon, the Chicago-based utility company, plummeted to a hundredth of a penny before closing down 4.2 percent at $41.86.