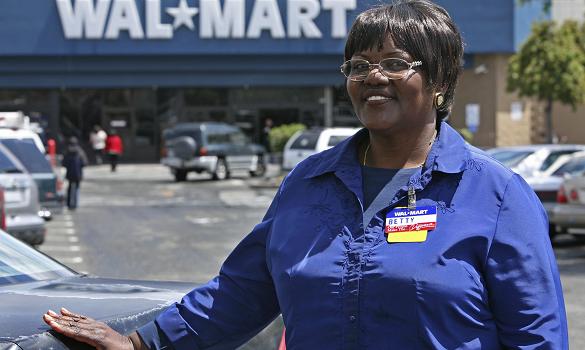 Betty Dukes is still an employee of Wal-Mart. If the Supreme Court rules in her favour, it could lead to billions in payouts(AP)

A 60-year-old “greeter” from Wal-Mart is at the centre of the largest sex-discrimination lawsuit in American history – a battle that has become known as “Betty versus Goliath” and is about to reach the country’s highest court.

Betty Dukes alleges that Wal-Mart, which owns Asda in Britain, systematically pays women less than men, and promotes men to higher positions at a faster rate.

The class action will list a series of breaches of the 1964 Civil Rights Act, which made it illegal for employers to discriminate on the basis of race or gender. If Wal-Mart is found to have broken the law, compensation payouts could be worth billions of dollars.

Theodore J. Boutrous Jr, the company’s lead lawyer, told The Times yesterday that the next stage of the nine-year dispute will be played out before the Supreme Court – the company’s last chance to argue that Mrs Dukes’s grievances should not be expanded into a broader case on behalf of an estimated one million current and former women employees. Mrs Dukes, a Baptist minister, said: “In this life, you have to stand up or be trampled.” After the 9th Circuit US Court of Appeals ruled in favour of the case progressing last week, she said that she was not deterred by the biblical scale of her battle. “David had five stones, but only needed one,” she said.

The quest began six years after Mrs Dukes took a $5-an-hour job on the Wal-Mart tills in 1994. She said that she had planned to work hard and advance through the company until she reached management. By 1999 that prospect had been destroyed. A dispute with managers over her chances of advancement ended in a humiliating demotion and pay cut, she said. A lawyer told her that she was not alone in claiming that she had encountered discrimination, and in 2001 the lawsuit was filed in San Francisco. The part-time preacher still works at Wal-Mart, and lives with her mother because, she says, she cannot afford a home of her own on her $15.23 (£9.98) an hour salary. “There are times that I can’t afford my lunch,” she said, wrapping her chicken nuggets in a napkin for later. “But I’m still blessed.”

The global retailer denies accusations of inequality and argues that if there are any instances of discrimination they are isolated, and not a company-wide problem. Wal-Mart says any such cases should be handled as individual lawsuits, not as a class action.

Mr Boutros said that the precedent would allow a wave of similar class actions to sweep US businesses. “We are going to ask the Supreme Court to review the case,” he told The Times. “The ruling really creates a class-action trap. The standards have been so diluted and make class action so much easier.” Even if the judges agree, no verdict would be expected until the summer of next year.