Hmmh. I would like to know who really firebombed the bank. (Another Iceland?) 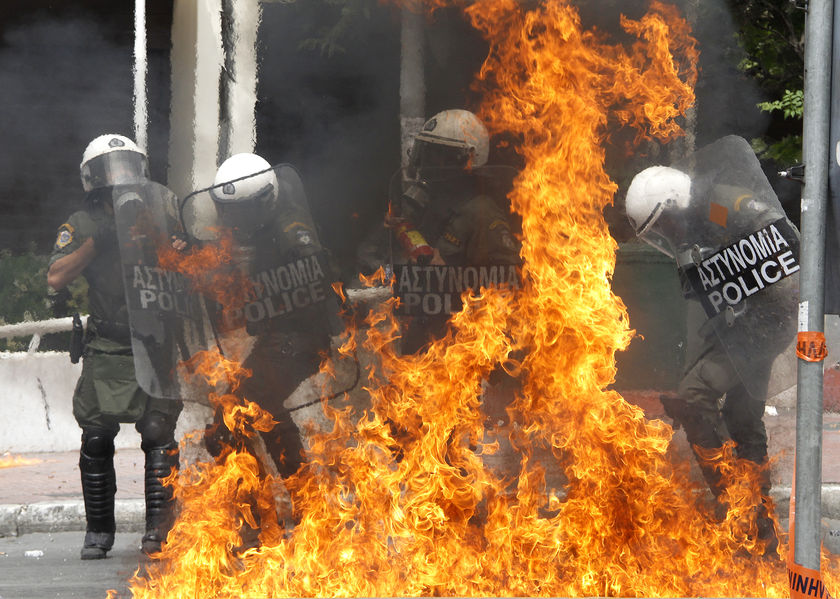 Three people died in a burning bank as tens of thousands of protesters took to the streets of Athens during a general strike over the Greek government’s planned spending cuts.

Some protesters tried to storm parliament while others threw petrol bombs at police and torched buildings in protest against new austerity measures and a decision to raise taxes to meet the conditions of its international bailout.

A petrol bomb hurled at an Athens branch of the Marfin Investment Bank killed two women and a man who were caught in the resulting inferno.

Greek Prime Minister George Papandreou has condemned the killing of three people in a firebombed bank during protests in Athens as a “murderous act”, vowing to bring those responsible to justice.

In an address to parliament on Wednesday, Papandreou denounced “the unfair deaths of our citizens who fell victim to a raw murderous act” hours after the three died when petrol bombs thrown by demonstrators set the bank on fire.

“Nobody has the right to violence and particularly violence that leads to murder. Violence breeds violence,” Papandreou said. 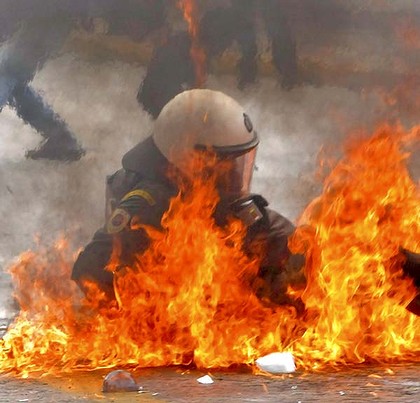 A riot policeman falls after being hit with molotov cocktail near the Greek parliament in Athens. Photo: Reuters

– At least 3 killed as protestors storm parliament in Greece (InTheNews):

At least three people have been killed in Greece as protestors stormed parliament buildings in Athens amid the country’s debt crisis.

Striking workers set fire to a bank, possibly after being hit by petrol bombs, with fire services saying three bodies were found inside the burning building.

Police have responded to the unrest with pepper spray, tear gas and stun grenades.

Transport was at a standstill in the country as the angry protestors began their second day of strikes in the capital today over the government’s response to the country’s huge deficit.

Public services including trains and airports suffered major delays and cancellations following a nationwide walk out over austerity measures.

The rally includes teachers, students and civil servants, who are attending the union-organised strikes in dispute of the measures which will see tax rises and cuts. The Greek parliament, which is set to vote on the austerity measures this week, plans to accept them in return for a rescue package from the Eurozone/International Monetary Fund (IMF) of €110 billion (£95 billion).

Hundreds of the public service workers attempted to storm the Greek parliament today, as security forces held firm to hold them back. Union bosses warned that more protestors were on their way to join in with the strikes, which mark the third time there has been a walkout since January. Thousands are now on the streets of Athens to voice their anger at the government’s response to the country’s ballooning debt.

Ilias Iliopoulos, general secretary of public sector union ADEDY said: “These measures are unfair, they burden the poor and the weak only.

“We will keep on protesting and urge workers to insist.”

As well as transport, the strikes have forced many schools and hospitals to shut.