May 2 (Bloomberg) — German Chancellor Angela Merkel said she was right to demand International Monetary Fund involvement in the Greek bailout over the objections of her European peers, saying it resulted in previously “unthinkable” budget cuts by Greece.

“This is an ambitious program which contains tough savings measures and on the other hand seeks to improve the efficiency of the Greek economy,” Merkel told reporters in Bonn today. “Three months ago it would have been unthinkable that Greece would accept such tough conditions.”

The elitist solution for the financial crisis: 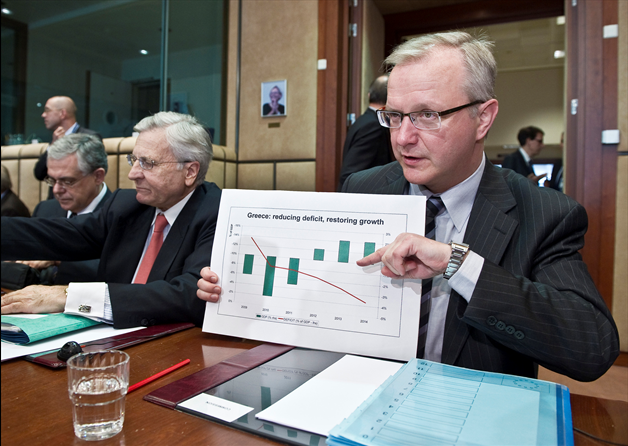 May 2 (Bloomberg) — Greece accepted an unprecedented bailout from the European Union and International Monetary Fund valued at more than 100 billion euros ($133 billion) to prevent default, agreeing to budget cuts that unions called “savage.”

The measures are worth 30 billion euros, or 13 percent of gross domestic product, and include wage cuts and a three-year freeze on pensions, Finance Minister George Papaconstantinou said in Athens today. Greece’s main sales tax rate will rise to 23 percent from 21 percent. The exact bailout amount will be agreed by euro-region finance ministers currently meeting in Brussels. Germany will provide 28 percent of the euro region contribution.

“Greece will be shielded from the international markets and will be able to put its house in order,” Papaconstantinou said in Athens. Prime Minister George Papandreou said “avoiding bankruptcy is a national red line” and the agreement will demand “big sacrifices” from Greeks to avoid “catastrophe.”

Policy makers are trying to prevent a Greek default as its fiscal crisis shows signs of spreading through the euro region. The agreement, following 10 days of talks and protests, comes after a surge in Greek borrowing costs left the government struggling to finance its debt and investors speculating that Portugal and Spain could also suffer their fate.

Euro region ministers started their meeting at 4 p.m. and will later hold a press conference, which will also be attended by European Central Bank President Jean-Claude Trichet. No time has yet been set.

German Chancellor Angela Merkel, who has expressed reluctance to bail out Greece with taxpayers’ funds, described the plan as “ambitious” and “arduous.” Arriving at the Brussels meeting, Belgian Finance Minister Didier Reynders said the package will be between 100 billion euros and 120 billion euros.

The bailout plan will give Greece time to fix its budget before returning to the market, which it wants to do “as soon as possible,” Papaconstantinou said.

“We want to implement our plan without the daily attacks of markets on Greek bonds,” he said. Other measures include abolishing the 13th and 14th wage payments that civil servants get annually for workers earning more than 3,000 euros per month, he said. Payments for those earning less than that will be capped at 1,000 euros, he said.

About two-thirds of the funds will come from Greece’s 15 euro-area partners, which must still sign off on the disbursement by a unanimous decision. The European Commission said today it approves of Greece’s request for aid. The International Monetary Fund will provide the rest of the funds.

The financial lifeline will last three years and will force Greece to cut its budget deficit below the EU’s limit of 3 percent of gross domestic product by the end of 2014. That’s one year later than originally planned. The shortfall was 13.6 percent in 2009.

The scale of the budget cuts has prompted some economists to speculate that Greece will have to restructure its debt because the strains placed on the economy will be too great. The government now expects the economy to shrink 4 percent this year and 2.6 percent in 2011 before expanding 1.1 percent in 2012 and almost double that in the following two years. In January, it forecast a 0.3 percent contraction for 2010.

“There is a very real possibility that at the end of two or three years, Greece will still have an unsustainable debt and will have to restructure because it will have a deep, deep recession in the meantime,” said Barry Eichengreen, economics professor at the University of California, Berkeley.

“We find ourselves before the most savage, unprovoked and unjust attack,” Spyros Papaspyros, head of the ADEDY civil servants union, said last week after seeing an outline of the cuts.

At stake is the future of the euro 11 years after its creators left fiscal policy in national capitals. As the Greek talks dragged on this past week, bonds dropped across Europe on investors’ concern that Portugal and Spain will also struggle to cut their deficits.

Spreads also widened as Merkel refused to immediately ratify the disbursement of loans as she faces a regional election in North Rhine-Westphalia in a week’s time. Fifty-six percent of Germans oppose giving Greece aid, calling such support “wrong,” Bild am Sonntag reported, citing an Emnid survey.

The extra yield that investors demand to hold Portuguese debt over German bunds surged to 298 basis points on April 28, the most since at least 1997. The Greek premium touched 827 points. The spread on Spain climbed to the highest since March 2009. Standard & Poor’s followed its decision to cut Greece’s credit rating to junk on April 27 was followed by downgrades on Portugal and Spain.

“After the immediate relief” from today’s aid package “the focus will be squarely on implementation risk in Greece and I believe Portugal, and probably Spain, will need to put on the table a stronger fiscal effort to avoid coming under renewed pressure in the coming weeks and months,” said Marco Annunziata, chief economist at UniCredit Group in London.

– Max Keiser on the Greek Crisis (with Greek subtitles) (Flashback)

– Warning For Britain As Financial Chaos Spreads to Spain

The International Monetary Fund is that last thing you need. You will lose your sovereignty. It exercises terrorism. You will be raped in such a way, that it will be the worst pain you have ever felt..
…
If someone burns down your house in order to sell you charcoal, would you consider this logical? That is exactly what Goldman Sachs did to the Greek economy. They burned you down like arsonists and then they tell you not to worry they’ll give you charcoal. It’s outrageous.