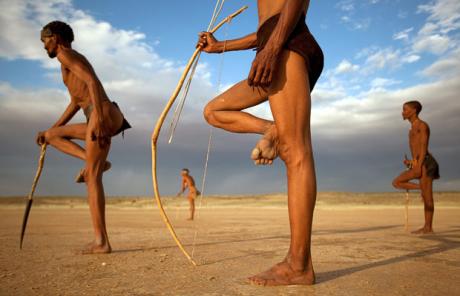 Ever since 1996, I have been following one of the most poignant tragedies of the modern world – the ruthless drive by the Botswanan government to expel the last remaining Bushmen, the original inhabitants of Africa, from their ancestral homeland in the Central Kalahari Game Reserve.

Although, in 2006, the country’s high court upheld the Bushmen’s right to remain in the reserve under Botswana’s constitution, the authorities have continued to persecute them, not least by denying them access to the borehole that provided them with water,

Now, in a further cynical twist to this inhuman policy, the authorities have permitted a supposedly eco-conscious company to open a tourist lodge in the reserve, complete with a swimming pool full of what the firm describes as “the most precious commodity in the desert”. Guests can even enjoy a “Bushman Walk”.

Not the least shocking feature of this official campaign of racial persecution is that it has been supported by our own Government (which first set up the reserve as a haven for the Bushmen in 1961), and also by the EU, which has poured aid worth millions of euros into Botswana’s tourist economy.

The UN’s rapporteur for indigenous peoples recently condemned the cutting off of the Bushmen’s water supply, and in June their plea for their water supply to be restored (which is supported by the admirable charity Survival International) will be heard in the courts. Meanwhile, weary Kalahari ecotourists can continue to cool off in the very water the Bushmen are denied.