‘Spain is worse than Greece.’ 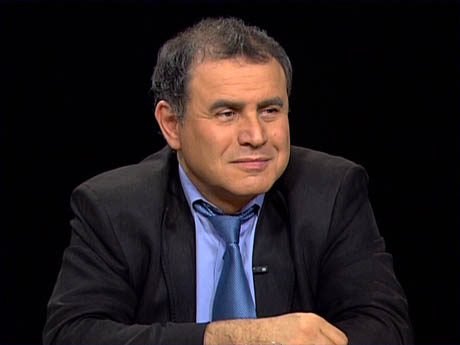 Meanwhile, Tony Barber has already come to the conclusion that as far as Greece is concerned, “the political conditions for extra financial help from Germany just do not exist”.

Nouriel, of course, takes that kind of thinking to its logical conclusion, and kicked off the panel by announcing that it was just in time: “in a few days,” he said, “there might not be a eurozone for us to discuss.” There’s no way that Greece can implement the 10% spending cut it needs to do in order to stop its debt spiralling out of control at current interest rates — and even if it did, the economic effects would be disastrous.

Of course, this being Nouriel, it goes downhill from there: if Greece is worse than Argentina, he says, then Spain is worse than Greece. Its housing bubble and bust has left the banking sector much weaker than Greece’s; its unemployment situation, especially with the under-30 crowd, is much worse than Greece’s; and the cost of any Spain bailout would be so much more enormous than the cost of a Greek bailout as to be almost unthinkable. The only thing that Spain has going for it is that it isn’t quite at the edge of the abyss yet; if it gets its political act together and implements tough fiscal and structural reforms now, it can save itself. But clearly no one saw that happening, given Spain’s political history over the past 20 years.