At the end of the following article famous investor Marc Faber had to say this:

“The best would be to kick out Greece and the countries that abuse the system,” Faber said in an interview. “They didn’t have the fiscal discipline that was essentially imposed by EU.”

It seems that there are more important things for ECB President Jean-Claude Trichet to do right now than to speak at the Council on Foreign Relations in New York, unless you know that those elitists at Bilderberg, CFR and the Trilateral Commission, that rule the governments, the central banks, the corporations and the media have created this entire financial crisis.

The elite is looting the people in the US, Europe and everywhere else.

The elite is bankrupting the people until they beg for world government and the New World Order.

What could Greece do?

Message to the people of Greece: Avoid the IMF like hell, because the IMF is hell.

The people in Greece seem to have a much better understanding of what is happening to them than the people in the US and the UK. 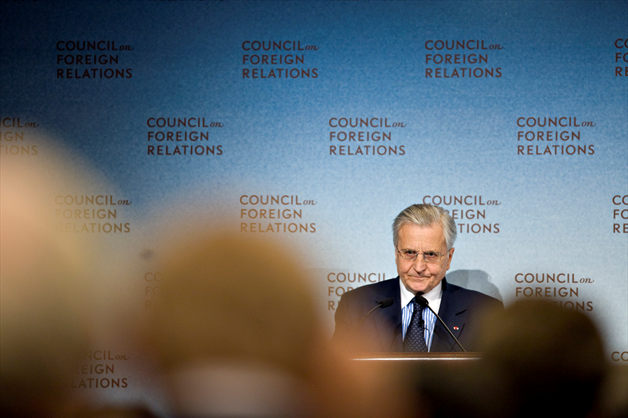 Jean-Claude Trichet, president of the European Central Bank, speaks at the Council on Foreign Relations in New York, on April 26, 2010. (Bloomberg)

April 28 (Bloomberg) — Europe’s worsening debt crisis is intensifying pressure on policy makers to widen a bailout package beyond Greece after a cut in the nation’s rating to junk drove up borrowing costs from Italy to Portugal and Ireland.

As German Chancellor Angela Merkel delays approval of a 45 billion-euro ($59 billion) Greek rescue, the crisis is spreading. Portugal’s benchmark stock index yesterday fell the most since the aftermath of Lehman Brothers Holdings Inc.’s collapse, while the extra yield that investors demand to hold Italian and Irish debt over bunds remained near yesterday’s 10-month high.

The danger for European officials is that the fiscal turmoil which started six months ago with fudged Greek budget data will spin out of their control. As Greece waits for its euro-region partners to disburse funds, the European Union has announced no concrete plans to help other nations should aid be needed. The euro yesterday weakened to the lowest in a year.

“Policy makers need to get ahead of the curve,” Eric Fine, who manages Van’s Eck’s G-175 Strategies emerging-market hedge fund. “This is no longer a problem about Greece or Portugal, but about the euro system.”

Governments will hold a summit by around May 10 to discuss Greece, EU President Herman Van Rompuy said today in Tokyo.

“Negotiations are going on and they are well on track and there is no question about the restructuring of the debt,” he said at a press conference.

The spread on Italy’s debt fell 1.3 basis points to 114.4 from 115.7 yesterday after the ratings cut, the highest since July. Portugal’s PSI-20 stock index dropped 5.6 percent, the most since October 2008. The yield on two-year Greek notes surged to more than 23 percent today, and the nation’s securities regulator imposed a two-month ban on short sales on the Athens stock exchange.

The euro gained today after the Financial Times reported the International Monetary Fund may increase its financial assistance in the first year to Greece by 10 billion euros from the current 15 billion euros, citing unidentified bankers and officials in Washington. The currency was trading at $1.3195 at 12:45 p.m. in Tokyo, having earlier traded at $1.3145, the lowest since April 29, 2009.

Erik Nielsen, chief European economist at Goldman Sachs Group Inc., said the Athens talks were likely focused on assistance in the first year of between 55 billion euro and 75 billion euros.

“I suspect that some haggling is now going on between the IMF and the Europeans on the burden sharing of a bigger program,” he said in a note to clients from Washington yesterday. “Investors should focus on the conditionality attached because that’s what will determine the sustainability of the program.”

Bonds plunged as Standard & Poor’s lowered its rating on Greece by three steps to BB+ from BBB+ and warned that investors could recover as little as 30 percent of their initial outlay if the country restructures its debt. The shift came minutes after the rating company reduced Portugal by two steps to A- from A+.

The moves exacerbated concern that Portugal and other nations trying to cut budgets will be left to fend for themselves by an EU that took two months to agree on a plan for Greece.

“The biggest risk now is that the market speculates against every single indebted peripheral country, and that could lead to a sovereign debt crisis,” said Axel Botte, a fixed- income strategist at AXA Investment Managers in Paris. “The contagion risk is real.”

The crisis is deepening as German lawmakers debate whether to put taxpayers’ money at risk in the face of public opposition and an election in the state of North Rhine-Westphalia on May 9. Bild Zeitung, Germany’s biggest-selling tabloid, yesterday ran a front-page headline asking: “Why do we have to pay Greece’s luxury pensions?”

European Central Bank President Jean-Claude Trichet, who declined to comment to reporters on yesterday’s downgrades, is in Berlin today to brief lawmakers on Greece’s deficit-cutting plans. The country is struggling to convince investors it can push its shortfall below the EU’s limit of 3 percent of gross domestic product from 13.6 percent last year.

The yield on the Greek two-year note rose 492 basis points to 23.9 percent today, more than 20 times the comparable German bond and 10 percentage points more than similar-maturity notes from Pakistan.

Greece, which faces 8.5 billion euros in bonds coming due on May 19, must still agree on terms for its rescue package, which will be co-financed by the euro region and the IMF. Greek Prime Minister George Papandreou last week activated the aid package and is facing fire from investors who say his budget steps need to go further and from voters who are staging strikes to protest further austerity measures.

As the turbulence exposes the weakness of having a currency area without a single fiscal authority, some economists said policy makers need to create a lending mechanism that will help other euro areas members through fiscal crises.

“What is missing in Europe is an authority that can back sovereigns through a crisis,” James Nixon, co-chief European economist at Societe Generale SA in London. “We desperately need this.”

The ECB should consider the “nuclear option” of buying government bonds to fight the crisis, said Jacques Cailloux, chief European economist at Royal Bank of Scotland Group Plc. While the central bank is prohibited from buying assets directly from governments, it can do so on the secondary market.

“It sends a signal to investors that the ECB is confident member states won’t default,” said Cailloux. “It’s a powerful confidence shock.”

ECB officials including Trichet have down played the risk of contagion from Greece, arguing other economies are in better shape even if they need to cut deficits. Still, Ireland’s deficit was 14.3 percent of GDP last year, the highest in the EU. Spain’s was 11.2 percent and Portugal’s 9.4 percent.

Marc Faber, the publisher of the Gloom, Boom & Doom report, said the time had come to eject euro members that repeatedly violated the region’s budget rules, even though no mechanism for such steps yet exists.

“The best would be to kick out Greece and the countries that abuse the system,” Faber said in an interview. “They didn’t have the fiscal discipline that was essentially imposed by EU.”

To contact the reporters on this story: Simon Kennedy in Paris at skennedy4@bloomberg.netEmma Ross-Thomas in Madrid at erossthomas@bloomberg.net;