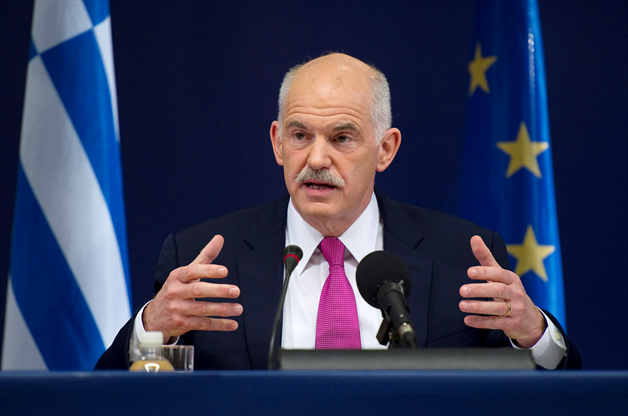 April 27 (Bloomberg) — Greece’s credit rating was cut three steps to junk by Standard and Poor’s, the first time a euro member has lost its investment grade since the currency’s 1999 debut. The euro weakened and stock markets throughout the region plunged.

Greece was lowered to BB+ from BBB+ by S&P, which also warned that bondholders could recover as little as 30 percent of their initial investment if the country restructures its debt. The move, which puts Greek debt on a par with bonds issued by Azerbaijan and Egypt, came minutes after the rating company reduced Portugal by two steps to A- from A+.

The turmoil comes as European Union policy makers struggle to agree on measures to ease the panic over swelling budget deficits. Leaders of the 16 euro nations may hold a summit after the Greek government’s decision last week to tap a 45 billion- euro ($60 billion) emergency-aid package failed to reassure investors, a European diplomat and Spanish official said.

“The markets are demanding their pound of flesh and want everything to be signed, sealed and delivered as of yesterday,” said David Owen, chief European financial economist at Jefferies International Ltd. in London.

“This is no longer a problem about Greece or Portugal, but about the euro system,” Eric Fine, who manages Van’s Eck’s G- 175 Strategies emerging-market hedge fund. “My concern is the risk of coordination failure. Policy makers need to get ahead of the curve.”

The crisis worsened this week as German Chancellor Angela Merkel’s government delays a decision on whether to release funds for a Greek rescue. Merkel, who faces an election in the state of North Rhine-Westphalia on May 9, said yesterday that Greece “must do its homework” before getting aid.

European Central Bank President Jean-Claude Trichet, who is in Chicago today and declined to comment on the downgrades, travels to Berlin tomorrow to brief German lawmakers on Greece’s deficit-cutting plans. The country is struggling to convince investors it can push its deficit below the EU’s limit of 3 percent of gross domestic product from 13.6 percent last year.

“No one in Europe is suggesting” that “the total amount of financing on the table is going to cover all of Greece’s borrowing needs” over the next three years, said David Beers, Global Head of Sovereign and International Public Finance Ratings, at S&P today.

Greek bonds are still eligible as collateral at the ECB, as long as the other two rating companies don’t follow suit. Moody’s Investors Service rates Greece A3 and Fitch Ratings BBB- .

The EU’s inability to contain the Greek crisis is sparking concern that other countries will have to fend for themselves and will struggle to win support from European parliaments. Portugal’s PSI-20 benchmark dropped 5.4 percent today, the most since the aftermath of Lehman Brothers Holdings Inc.’s collapse. Spain’s IBEX 35 Index dropped 4.2 percent.

“There is a clear risk that contagion pressures might intensify in the coming months, perhaps after a brief respite immediately after the Greek package is finalized and money starts being disbursed,” said Marco Annunziata, chief European economist at UniCredit Group in London.

Merkel said yesterday she expects a German decision in “days.” Greece faces 8.5 billion euros of bonds maturing in May, with the first redemption due May 19.

Portuguese Finance Minister Fernando Teixeira dos Santos said today his government needs to react to “attacks by markets” and will do what’s needed to reduce its deficit.

Greek Prime Minister George Papandreou asked for emergency cash from the EU and International Monetary Fund last week to avoid defaulting on its debt. Investors in Greek bonds may get back between 30 percent and 50 percent of the value of their holdings should the government default or restructure its debt, said S&P.

“The financial package has clearly not eased market concerns,” said Colin Ellis, European economist at Daiwa Capital Europe Ltd. in London. The Greek downgrade “together with Portugal and the widening of spreads means that other euro- area countries appear to be sliding to a similar fate.”

To contact the reporter on this story: Andrew Davis in Rome at abdavis@bloomberg.netEmma Ross-Thomas in Madrid at erossthomas@bloomberg.net