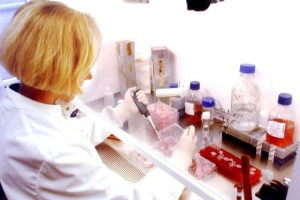 Scottish scientists have made cancer tumors vanish within 10 days by sending DNA to seek and destroy the cells.

The system, developed at Strathclyde and Glasgow universities, is being hailed as a breakthrough because it appears to eradicate tumors without causing harmful side-effects. A leading medical journal has described the results so far as remarkable, while Cancer Research UK said they were encouraging.

Dr Christine Dufes, a lecturer at the Strathclyde Institute of Pharmacy and Biomedical Sciences and leader of the research, said: “The tumors were completely gone within 10 days. It is fantastic. When you talk about 10 days that is the time frame for curing a cold. Imagine if within 10 days you could completely make a tumour disappear.”

Researchers around the world are trying to find ways to use genes as a cancer treatment, but one problem is ensuring they attack the tumor without destroying healthy tissue.

In laboratory experiments the Strathclyde research team used a plasma protein called transferrin, which carries iron through the blood, to deliver the therapeutic DNA to the right spot. Once in situ the DNA produced a protein that attacked the tumor cells.

The findings have been published in the Journal of Controlled Release, with an accompanying comment from editor Professor Kinam Park, of Purdue University, Indiana, saying other attempts to target genes at cancer cells have “seldom shown complete disappearance of tumors”.

The research was initially supported with a grant from charity Tenovus Scotland, which supports the work of young scientists to help their ideas get off the ground.