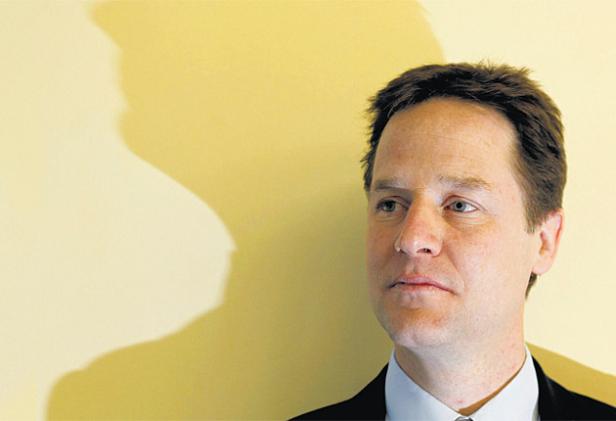 YouGov also found that if people thought Mr Clegg’s party had a significant chance of winning the election, it would win 49 per cent of the votes, with the Tories winning 25 per cent and Labour just 19 per cent.

The Sun newspaper failed to publish a YouGov poll showing that voters fear a Liberal Democrat government less than a Conservative or Labour one.

The Liberal Democrats accused the newspaper, which is owned by Rupert Murdoch, of suppressing the finding. The paper, which endorsed Labour in the past three elections, declared its support for David Cameron during the Labour Party’s annual conference last October. Like other Tory-supporting papers, it has turned its fire on Nick Clegg over his policies, pro-European statements and expenses claims since he won last week’s first televised leaders’ debate.

YouGov also found that if people thought Mr Clegg’s party had a significant chance of winning the election, it would win 49 per cent of the votes, with the Tories winning 25 per cent and Labour just 19 per cent. One in four people Labour and one in six Tory supporters say they would switch to the Liberal Democrats in these circumstances. The party would be ahead among both men and women, in every age and social group, and in every region. On a uniform swing across Britain, that would give the Liberal Democrats 548 MPs, Labour 41 and the Tories 25.

The Liberal Democrats hope the long-standing argument that supporting them would be a “wasted vote” is breaking down following the surge in support for them in the past week. However, even the most optimistic Liberal Democrats do not expect to win the election.

The party has taken comfort from YouGov’s unpublished finding that more voters would be delighted by the formation of a Liberal Democrat government (29 per cent), than by a Tory government (25 per cent) or a Labour one (18 per cent).

The Liberal Democrats are angry that The Sun did not publish these figures. Lord Oakeshott of Seagrove Bay, the party’s Treasury spokesman, said: “The numbers show that half the country cannot stand Gordon Brown and that the other half can’t stand David Cameron. I wonder why The Sun wouldn’t share this news with its readers.

“We always knew…that when people believe the Liberal Democrats can win, there is a big jump in our support. In 90 minutes in the first debate, Nick Clegg tore open the two-party straitjacket which has stifled British politics for the last 80 years. Now, at last, people can vote for what they want, not against what they fear.”

The Sun declined to comment last night. On the day the poll’s findings were published on Tuesday, it focused on the Tories moving into the lead in the share of the vote and said there were signs that the Liberal Democrats’ surprise surge was on the wane. An editorial comment said: “Mr Clegg is the political equivalent of a holiday romance. An exciting fortnight’s flirtation so long as you don’t ask too many questions. We cannot gamble the nation’s future like that.”

However, Sun journalists said YouGov’s extensive daily poll always contained too many findings to publish. On Monday, the paper ran a front-page story saying the Liberal Democrats had taken the lead, based on the previous day’s survey.

Peter Kellner, the YouGov president, said in a commentary on the unpublished poll that it was no longer outlandish to ask whether Mr Clegg could end up as prime minister. “The answer is probably no – I’d put the odds at 10-1 against – but longer-odds horses have won big races in the past,” he said.

Mr Kellner added: “Not only is a Lib Dem government the most popular option; it is the one that frightens voters far less than any other option. If the Lib Dem bandwagon is to be halted and sent into reverse, Labour and the Tories must do far more to persuade voters that a vote for the Lib Dems would be seriously bad for Britain.”

Another poll published yesterday suggested that the Liberal Democrats’ advance has proved more damaging to the Tories than to Labour.

According to the Ipsos MORI poll for Reuters, the Tories have achieved a 5 per cent swing from Labour since the last general election, in 2005, in Labour-held marginal constituencies. That suggests Britain is still heading for a hung parliament, with the Tories as the largest party.

The poll, conducted between 16 and 19 April, showed support for Labour fell to 36 percent compared with 41 per cent two weeks ago, while Tory support dropped to 32 percent from 38 per cent. Liberal Democrat support jumped to 23 per cent from 11 per cent.

The swing to the third party comes mainly from voters who were previously not sure they would vote.

The truth about those smears against Clegg

Truth: Despite the front page headline Mr Clegg did not break any parliamentary rules, and the cash – which the party said helped pay for a researcher in Mr Clegg’s office – was declared in the Commons register of members’ interests. The Daily Telegraph says he made separate claims under his office allowances budget to cover staffing. The Liberal Democrats say the story is “wrong in fact” and have produced paperwork to back up their assertion.

Truth: Before becoming an MP, Mr Clegg had a brief spell as a lobbyist for GPlus. Its clients included the Royal Bank of Scotland, which was attempting to amend EU directives. Mr Clegg did work on the RBS account, but did not lobby “externally” on its behalf. GPlus said last night that Mr Clegg worked for it two days a week for about eight and a half months.

Claim: Clegg made a “Nazi slur on Britain” and said the British have a “more insidious cross to bear” than Germans over the Second World War (Daily Mail, yesterday).

Truth: The comments were made in a newspaper article by Mr Clegg in 2002 when he was a Euro MP. Written after two Germans working in a call centre in Swindon went to an industrial tribunal to protest about the abuse they suffered, it argued the British still laboured from “anti-German mania”. He concluded: “All nations have a cross to bear, and none more so than Germany with its memories of Nazism. But the British cross is more insidious still. A misplaced sense of superiority, sustained by delusions of grandeur and a tenacious obsession with the last war, is much harder to shake off.”

Claim: “Clegg refused to return a £2.4m donation to the party from convicted fraudster Michael Brown” (The Sun, Tuesday).

Truth: Brown’s donations in 2004 – the biggest in the party’s history – have hung over the Liberal Democrats for years. First, there were questions whether Brown’s company, 5th Avenue Partners, was a genuine UK business. Then in 2008 Brown was charged with fraud and money-laundering and fled bail. He was convicted in his absence and sentenced to seven years in jail. Despite the conviction, the Electoral Commission has concluded the donations were permissible because the firm “was carrying on business in the UK” at the time and the Liberal Democrats had no need to return the money.

Claim: The Liberal Democrats have “flip-flopped shamelessly” on Afghanistan (The Sun, yesterday).

Truth: This is based on a party conference motion last year which said ministers should focus on “concluding the Afghanistan mission” and called on the UK to end the “military first” approach to the country. However, motions passed at party conferences are not binding and the party’s foreign affairs spokesman, Ed Davey, told delegates the party supported the war. Its manifesto stops short of setting a timetable for withdrawal and says the Liberal Democrats will be “critical supporters of the Afghanistan mission”.

Claim: Britain’s security would be risked by Liberal Democrat policy to scrap our Trident nuclear defence (The Sun, yesterday).

Truth: The Liberal Democrats’ manifesto does say they would “rule out the like-for-like replacement of the Trident nuclear weapons system” to save £100m. However, they also say they are multilateralist, not unilateralist. Former leader Sir Menzies Campbell favours replacing Trident with cheaper, nuclear-tipped cruise missiles which could be stationed on smaller Astute-class subs. This would mean Britain would remain a nuclear power with a seat at the UN Security Council.

Truth: The Liberal Democrats propose an amnesty for failed asylum seekers and illegal immigrants who have been here for 10 years and not committed any crimes. This is controversial because of fears it could encourage illegal immigrants to try their luck in Britain in the hope of triggering a further amnesty in the future. The Liberal Democrats would also introduce a regional points-based system to allow migrants to work only where they are needed. It would be backed up by “rigorous checks on businesses and a crackdown on rogue employers who profit from illegal labour”.

Truth: The Liberal Democrat manifesto does promise to “introduce a presumption against short-term sentences of less than six months – replaced by rigorously enforced community sentences which evidence shows are better at cutting reoffending”. The Daily Mail claimed that in 2008 “no fewer than 58,076 people were sentenced to a prison term of six months or less”. The Ministry of Justice said the real figure was 55,333. The Liberal Democrat policy would spare offenders from going into prison; it would not “free” prisoners.

Truth: His half-Russian banker father sent him to one of Britain’s smartest prep schools, Caldicott; he went on to Westminster School and Cambridge. A friend is quoted as saying: “His father was an incredibly wealthy banker with loads of houses – in London, in the Chilterns, a French chateau, a ski chalet in Switzerland… I think.” So true – but then so is David Cameron.