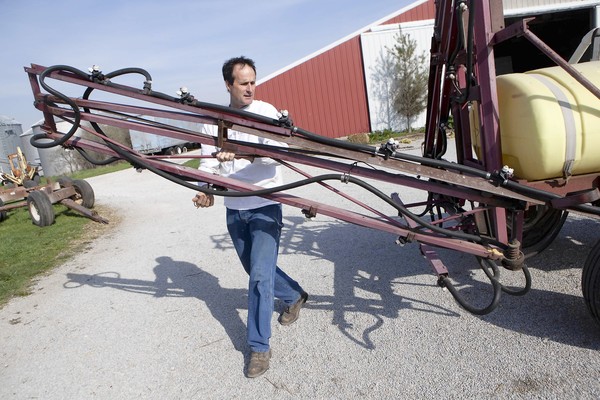 Manufacturers say their own research proves the chemical is safe. But alarmed by other studies, the Obama administration is conducting a broad review that could lead to tighter restrictions. It is also mulling changes in laws that require water utilities to test for atrazine just once a quarter or, in some cases, once a year.

“There always have been a lot of questions about atrazine, and we want to make sure the agency’s regulatory posture is consistent with the science about possible health effects,” said Steve Owens, the U.S. Environmental Protection Agency’s assistant administrator for prevention, pesticides and toxic substances.

Even with limited official testing, atrazine in the past four years was detected in the drinking water of 60 Illinois communities where more than a million people live, according to a Tribune analysis of state and federal records.

Under a deal between the EPA and the chief manufacturer of atrazine, about 130 water utilities in 10 states are tested weekly or biweekly. The Tribune analysis showed that during 2008, four downstate towns — Evansville, Farina, Flora and Mount Olive — were among nine Midwest communities where the average annual level of atrazine and its breakdown products exceeded the federal safety limit of 3 parts per billion. About half of the 130 saw concentrations that jumped above 3 parts per billion at least once that year.

In Flora, about 240 miles south of Chicago, atrazine levels spiked as high as 30 parts per billion. The findings concern researchers because some studies have shown adverse affects from exposure to concentrations as small as 0.1 parts per billion. The chemical has not been found in Chicago tap water, in part because Lake Michigan dilutes farm runoff.

The more frequent tests are done outside the EPA’s official monitoring program and don’t count when regulators consider whether communities meet the legal limit for atrazine.

They also don’t trigger provisions in the federal Safe Drinking Water Act that require the public to be notified about water contamination. As a result, residents are rarely advised that they can buy inexpensive filters to screen the chemical out of their tap water.

Atrazine can’t be sprayed in Europe because it contaminates groundwater, but it remains widely used in the U.S., where the EPA endorsed its continued use as recently as 2006, based on a scientific review from 2003. Federal records show the review was heavily influenced by industry and relied on studies financed by Syngenta, a Swiss-based company that manufactures most of the atrazine sprayed in the U.S.

Before clearing the way for continued use of the chemical, Bush administration officials met privately with Syngenta executives at least 50 times and convened two industry-dominated panels that shaped the agency’s decision, according to records obtained by the Natural Resources Defense Council, an environmental group that advocates a ban on the chemical.

The new review is related to an effort to overhaul the nation’s chemical safety laws. Last year the nonpartisan Government Accountability Office criticized the EPA for failing to adequately assess the risks posed by thousands of toxic chemicals. The agency is generally required to prove chemicals are harmful before it can take regulatory action; in Europe, by contrast, the burden is on manufacturers to prove the safety of their products.

Pesticides such as atrazine are studied more rigorously than industrial chemicals, and the weedkiller has been on the market since the late 1950s. But researchers are increasingly identifying atrazine as an endocrine disruptor — a hormone-like substance that can affect development and the reproductive systems of humans and wildlife.

Syngenta contends that the vast majority of studies show no harmful effects from atrazine at levels found in the environment.

“It’s one of the best-studied herbicides on the planet,” Tim Pastoor, the company’s chief scientist, said in an interview. “When it comes to atrazine, the water is safe.”

A key question is whether EPA regulations reflect the latest science. The agency is considering dozens of studies published since its last atrazine review, including about 100 on human health effects.

One study released last year by Indiana University researchers found that nine types of birth defects occurred more frequently in babies born to mothers whose last menstrual period occurred between April and July, when levels of atrazine in lakes and streams are highest. Neonatologist Paul Winchester said his work couldn’t definitively pin the blame on atrazine — that would require deliberately exposing pregnant women to the chemical — but he said the correlation was statistically sound.

Government scientists also have raised concerns. One EPA study found that rats were more vulnerable to cancer later in life when exposed to small, brief doses of atrazine as fetuses.

“There’s still a lot more we need to learn about atrazine, but it appears to have effects during critical stages of fetal development,” said former EPA researcher Suzanne Fenton, now at the National Institute of Environmental Health Sciences.

The human research was prompted by studies of wildlife. In January, University of South Florida researchers analyzed 125 recent studies of atrazine and found that most reported the weedkiller disrupted the fertility and development of fish and amphibians.

Tyrone Hayes, a University of California- Berkeley scientist, once studied atrazine for a Syngenta-funded research institute but left after a dispute over some of his findings. Hayes’ latest study, published in the Proceedings of the National Academy of Sciences, found that male frogs raised in atrazine-tainted water often showed signs of “feminization,” with lower testosterone levels and decreased fertility. Some were chemically castrated; others grew female sex organs.

Syngenta says much of the independent research on atrazine is flawed. Company-financed studies, Pastoor said, have found atrazine doesn’t harm frogs or humans. He said the EPA, under guidelines developed during the Bush administration, considers one-day exposures of up to 297 parts per billion safe for people.

Removing atrazine from drinking water can be expensive. Last year, 44 water systems in Illinois, Indiana, Iowa, Kansas, Mississippi and Ohio filed a federal lawsuit seeking reimbursement from Syngenta and other manufacturers. Flora, population 5,086, recently started pumping water from a $27 million cooperative treatment plant more than 60 miles away rather than draw water from an aging local plant.

Some farm groups say there is enough evidence to vouch for the safety of atrazine. Banning it would raise costs for farmers and cut corn yields, supporters say. Yet that view isn’t universal. Several states, including Iowa, Minnesota and Wisconsin, prohibit atrazine spraying in some areas prone to groundwater contamination. The Iowa Farmers Union supports tougher limits on atrazine for the same reason.

John Kiefner still uses atrazine on the 500 acres he farms near Manhattan in southern Will County. However, he said he uses much smaller concentrations than he did years ago, relies on no-till practices to curb soil erosion and runoff, and plants grass buffers along drainage ditches to filter chemical residue. “We like to have a full arsenal of weedkillers,” Kiefner said. “If (atrazine) stays in the field, it’s not going into the water.”

A few miles away, Bill Heintz said he stopped using atrazine a decade ago. Alternative chemicals, he said, have worked just as well at controlling weeds on the 100 acres he farms near Peotone.

“Even 10 years ago, it sounded like something to steer away from,” he said.