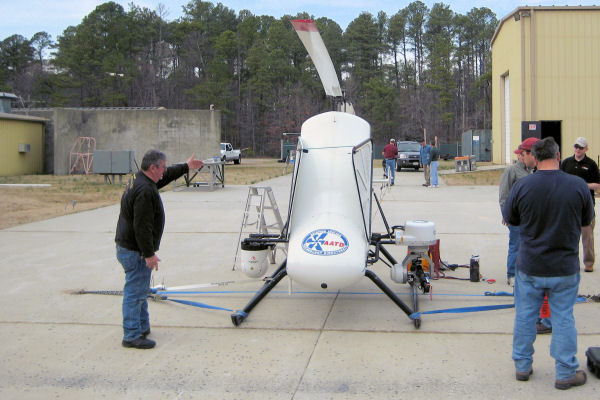 Stopping the pirates of Somalia hasn’t been easy. But when the navies of the world have repelled or killed the hijackers, it’s often involved three elements: helicopters, drones and trained snipers. The U.S. Army is working on a weapon which combines all three.

It’s called the Autonomous Rotorcraft Sniper System. It mounts a powerful rifle onto highly stabilized turret, and fixes the package on board a Vigilante unmanned helicopter. I describe the system in this month’s Popular Mechanics.

The system is intended for the urban battlefield – an eye in the sky that can stare down concrete canyons, and blink out targets with extreme precision. Attempting to return fire against the ARSS is liable to be a near-suicidal act: ARSS is described as being able to fire seven to 10 aimed shots per minute, and it’s unlikely to miss.

Recent events off Somalia, however, may have suggested other uses for this technology. Last week’s standoff between pirates and the U.S. Navy in the Indian Ocean ended famously with three sniper shots, as a drone watched overhead. In 2008, French special forces captured six pirates on land after ransom had been paid.

“There were four helicopters involved,” The Independent reported at the time. “A sniper [in a Puma helicopter] shot out the motor of the pirates’ four-wheel drive vehicle. A second helicopter [a Gazelle] then landed nearby, allowing the six pirates to be arrested” – without any casualties.

They are accurate enough to knock out engines without harming the crew or damaging fuel tanks. “The driver just threw his hands up,” concludes the description of one such action in Men’s Vogue, after all three engines were disabled with three shots.

And because the Vigilante is smaller, lighter and cheaper than a manned combat helicopter, it can be supplied in greater numbers, and without the need for those elite, highly-trained snipers.

Sniping from a chopper currently takes tons of skill and training.

But ARSS is literally point-and-shoot for the operator on the ground, using a videogame-type controller. The software makes all the necessary corrections, and the system should ensure first-round kills at several hundred yards.

The secret is in the control system and stabilized turret (on the right in the picture above), which is currently fitted with a powerful RND Manufacturing Edge 2000 rifle specifically designed for sniping work, using the heavyweight .338 Lapua Magnum cartridge.

The stabilized turret could be fitted to a variety of other vehicles – including a a small blimp, or a fixed-wing unmanned plane, like the Predator. Compared to the Predator’s array of Hellfire missiles, the ARSS’ lone gun would be much less likely to hit civilians.

It would also give a far deeper magazine:
dozens of shots instead of a handful of missiles, and at a cost of around $4 per trigger pull rather than about $100,000 for a Hellfire.

But the turret doesn’t need such a big craft to carry it, as the complete turret assembly weighs less than a single Hellfire.

The name needs changing. But the Autonomous Rotorcraft Sniper System looks like it may have a big future – maybe on land, or maybe at sea.