Hiding behind the complexities of our financial system, banks and other institutions are being accused of fraud and deception, with Goldman Sachs just the latest in the spotlight. This has become the most pressing election issue of all 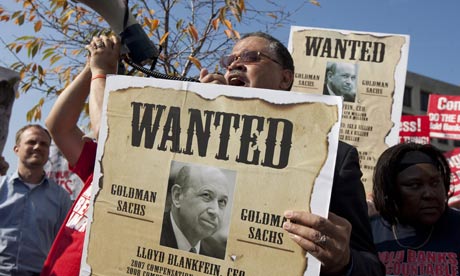 Goldman Sachs was in the spotlight last November when demonstrators protested outside its Washington offices against executive bonuses. (Bloomberg via Getty Images)

The global financial crisis, it is now clear, was caused not just by the bankers’ colossal mismanagement. No, it was due also to the new financial complexity offering up the opportunity for widespread, systemic fraud. Friday’s announcement that the world’s most famous investment bank, Goldman Sachs, is to face civil charges for fraud brought by the American regulator is but the latest of a series of investigations that have been launched, arrests made and charges made against financial institutions around the world. Big Finance in the 21st century turns out to have been Big Fraud. Yet Britain, centre of the world financial system, has not yet levelled charges against any bank; all that we’ve seen is the allegation of a high-level insider dealing ring which, embarrassingly, involves a banker advising the government. We have to live with the fiction that our banks and bankers are whiter than white, and any attempt to investigate them and their institutions will lead to a mass exodus to the mountains of Switzerland. The politicians of the Labour and Tory party alike are Bambis amid the wolves.

Just consider the roll call beyond Goldman Sachs. In Ireland Sean FitzPatrick, the ex-chair of the Anglo Irish bank was arrested last month and questioned over alleged fraud. In Iceland last week a dossier assembled by its parliament on the Icelandic banks – huge lenders in Britain – was handed to its public prosecution service. A court-appointed examiner found that collapsed investment bank Lehman knowingly manipulated its balance sheet to make it look stronger than it was – accounts originally audited by the British firm Ernst and Young and given the legal green light by the British firm Linklaters. In Switzerland UBS has been defending itself from the US’s Internal Revenue Service for allegedly running 17,000 offshore accounts to evade tax. Be sure there are more revelations to come – except in saintly Britain.

Beneath the complexity, the charges are all rooted in the same phenomenon – deception. Somebody, somewhere, was knowingly fooled by banks and bankers – sometimes governments over tax, sometimes regulators and investors over the probity of balance sheets and profits and sometimes, as the Securities and Exchange Commission (SEC) says in Goldman’s case, by creating a scheme to enrich one favoured investor at the expense of others – including, via RBS, the British taxpayer. Along the way there is a long list of so-called “entrepreneurs” and “innovators” who were offered loans that should never have been made. Lloyd Blankfein, Goldman’s CEO, remarked only semi-ironically that his bank was doing God’s work. He must wake up every day bitterly regretting the words ever emerged from his mouth.

For the Goldmans case is in some ways the most damaging. The Icelandic banks, Anglo Irish bank and Lehman were all involved in opaque deals and rank bad lending decisions – but Goldman allegedly went one step further, according to the SEC actively creating a financial instrument that transferred wealth to one favoured client from others less favoured. If the Securities and Exchange Commission’s case is proved – and it is aggressively rebutted by Goldman – the charge is that Goldman’s vice-president Fabrice Tourre created a dud financial instrument packed with valueless sub- prime mortgages at the instruction of hedge fund client Paulson, sold it to investors knowing it was valueless, and then allowed Paulson to profit from the dud financial instrument. Goldman says the buyers were “among the most sophisticated mortgage investors” in the world. But this is a used car salesman flogging a broken car he’s got from some wide-boy pal to some driver who can’t get access to the log-book. Except it was lionised as financial innovation.

The investors who bought the collateralised debt obligation (CDO) were not complete innocents. They had asked for the bond to be validated by an independent expert into residential mortgage-backed securities – a company called ACA management. ACA gave the bond the thumbs-up on the understanding from Fabrice Tourre that the hedge fund Paulson were investing in it. But the SEC says Tourre misled them, a pivotal claim that Goldman denies. The reality was that Paulson was frantically buying credit default swaps in the CDO that would go up in price the more valueless it became – a trade that would make more than $1 billion. Worse, Paulson had identified some of the dud sub-prime mortgages that he wanted Tourre to put into the CDO. If the SEC case is true, this was a scam – nothing more, nothing less.

Tourre could see what was coming. In one email in January 2007 he wrote: “More and more leverage in the system. The whole building is about to collapse anytime now… only potential survivor, the fabulous Fab[rice Tourre] .. standing in the middle of all these complex highly leveraged exotic trades he created without necessarily understanding all of the implications of those monstrosities”. Fabulous Fab, like his boss, will not be feeling very fab today.

The cases not only have a lot in common – using financial complexity allegedly to deceive and then using so-called independent experts to validate the deception (lawyers, accountants, credit rating agencies, “portfolio selection agents,” etc etc ) – but they also show how interconnected the financial system is. In Iceland Citigroup and Deutsche Bank covered the margin calls of distressed Icelandic business borrowers, deepening the crisis. Lehman uses the lightly regulated London markets and two independent British experts to validate that their “Repo 105s” were “genuine” trades and not their own in-house liability. The American authorities pursued a Swiss bank over aiding and abetting US nationals to evade tax.

Bankers will complain these cases all involve one or two misguided individuals, but that most banking is above board and was just the victim of irrational exuberance, misguided belief in free market economics and faulty risk management techniques. Obviously that is true – but, sadly, there is much more to the crisis. Andrew Haldane, executive director of the Bank of England, highlights the remarkable reduction in the risk weighting of bank assets between 1997 and 2007. Put simply, Europe’s and the US’s large banks exploited the weak international agreement on bank capital requirements in the so-called Basel agreement in 2004 to reclassify the risk of their loans and trading instruments. They did not just reduce the risk by 5 or 10%. Breathtakingly, they claimed their new risk management techniques were so wonderful that the riskiness of their assets was up to half of what it had been – despite property and share prices cresting to new all-time highs.

Brutally, the banks knowingly gamed the system to grow their balance sheets ever faster and with even less capital underpinning them in the full knowledge that everything rested on the bogus claim that their lending was now much less risky. That was not all they were doing. As Michael Lewis describes in The Big Short, credit default swaps had been deliberately created as an asset class by the big investment banks to allow hedge funds to speculate against collateralised debt obligations. The banks were gaming the regulators and investors alike – and they knew full well what they were doing. Simon Johnson’s 13 Bankers shows how the major American banks deployed vast political lobbying power and money to create the relaxed regulatory environment in which all this could take place. In Britain no money changed hands. Gordon Brown offered light-touch regulation for free – egged on by the Tories, who wanted to go further.

This was the context in which Goldman’s Fabulous Fab created the disputed CDOs, Sean FitzPatrick allegedly moved loans between banks and Lehman created its Repo 105s along with the entire “debt mule” structure revealed this weekend of inter-related companies to shuffle debt around its empire. London and New York had become the centre of an international financial system in which the purpose of banking became making money from money – and where the complexity of the “innovations” allowed extensive fraud and deception.

Now it has all collapsed, to be bailed out by western taxpayers. The banks are resisting reform – and want to cling on to the business practices and business model that has so appallingly failed. It is obvious why: it makes them very rich. The politicians tread carefully, only proposing what the bankers say is congruent with their definition of what banking should be. Labour and Tories alike are united in opposing improved EU regulation of hedge funds, buying the propaganda those operations had nothing to do with the crisis. Perhaps Paulson’s trades at Goldman, and the hedge funds’ appetite for speculating in credit default swaps, may disabuse them.

It is time to reframe the question. Banks and financial institutions should do what economy and society want them to do – support enterprise, direct credit to where it is needed and be part of the system that generates investment and innovation. Andrew Haldane – and the governor of the Bank of England – are right. We need to break up our banks, limit their capacity to speculate and bring them back to earth. Britain should also launch an official investigation into what went wrong – and hand the findings to the Serious Fraud Office. This needs to become this election campaign’s number one issue – not one which either a compromised Labour party or a temporising Conservative party will relish. The Lib Dems, the fiercest critics of the banks, have begun to get very lucky.

September 2007
Funding problems at Northern Rock triggers the first run on a British bank. It is nationalised in February 2008.

April 2008
Bear Stern faces bankruptcy after a run on the company wipes out cash reserves in less than two days. Backed by the Federal Reserve, JPMorgan buys up shares at far below market value.

September 2008
Lehman Brothers files for bankruptcy protection, becoming the first major bank to collapse since the start of the credit crisis.

March 2010
Former chairman of Anglo Irish bank Sean Fitzpatrick is arrested in Dublin after failing to disclose details of loans worth millions from the bank.

April 2010
Northern Rock former directors, David Baker and Richard Barclay, are fined £504,000 and £140,000 for deliberately misleading analysts prior to nationalisation.

April 2010
The US Securities and Exchange Commission accuses Goldman Sachs of “defrauding investors by misstating and omitting key facts”.