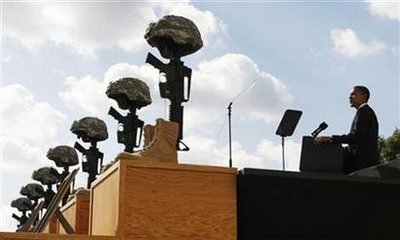 President Barack Obama speaks behind the boots, helmets and rifles of the fallen soldiers during the III Corps and Fort Hood Memorial Ceremony November 10, 2009 held to honor the victims of the shootings on the Fort Hood Army post in Fort Hood, Texas. (REUTERS)

BRIDGETOWN, Barbados (Reuters) – The Obama administration, facing a subpoena threat from Congress, will not share information that could compromise its prosecution of the suspected gunman in last year’s Fort Hood shooting, U.S. Defense Secretary Robert Gates said on Friday.

Two U.S. senators vowed on Thursday to subpoena the Obama administration next week unless it produces information sought in a congressional investigation of last year’s rampage at the Texas military base in which 13 soldiers were killed.

They said the Justice and Defense departments had until Monday to provide the information or face legal action.

Gates, speaking to reporters after attending a Caribbean security conference in Barbados, said the U.S. government had no interest in hiding information from Congress but the legal case against Major Nidal Malik Hasan had to take priority.

“Anything that does not have any impact on that prosecution, we are more than willing to share,” Gates said.

“But what’s most important is this prosecution. And we will cooperate with the committee in every way — with that single caveat, that whatever we provide doesn’t compromise the prosecution.”

Senate Homeland Security Committee Chairman Joe Lieberman, an independent, and Susan Collins, the panel’s top Republican, have been trying for months to obtain specific information about the rampage, which also left many wounded.

Responding to Gates’ statements, Lieberman and Collins said, “There are many examples for allowing Congress to interview FBI agents, even while a criminal prosecution was in progress for which they could be witnesses, so we view that argument as baseless.”

The two senators also said they hoped the Pentagon “will now turn over information we requested that clearly has no bearing on the prosecution.” That includes Hasan’s personnel file, performance evaluations and summaries of statements from witnesses at the shooting, the senators said.

Earlier, Lieberman and Collins said their committee wanted access to documents and witnesses regarding what the FBI and Defense Department knew about Hasan before the shootings. They have rejected administration claims that the information could compromise the pending prosecution of Hasan.

Lieberman and Collins said the Pentagon and FBI had turned over some documents to their committee but they primarily involved background material.

Justice and Defense departments officials sent a joint letter on Monday to Lieberman and Collins telling them that turning over the information and its disclosure could compromise the case against Hasan, who was severely wounded in the incident.

Gates suggested that the Obama administration was unwilling to reconsider its position ahead of the threatened deadline.

The subpoena could be an unwanted distraction for a White House already under pressure to cut unemployment, nominate a new Supreme Court justice, pass climate change legislation and regulate the financial industry.

Hasan, an Army psychiatrist, has been charged by the military with 13 counts of premeditated murder and 32 counts of attempted murder. Hasan had been in contact with an anti-American Muslim figure sympathetic to al Qaeda. His trial is expected later this year.

Lieberman has said his committee wants to know why the suspect was not stopped before shooting spree.

Gates said internal reviews ordered after the shooting had already led to changes with the Defense Department and the U.S. armed forces. The reviews exposed shortcomings in both intelligence and oversight.

(Additional reporting by Thomas Ferraro and Jeremy Pelofsky in Washington; Editing by Bill Trott and Will Dunham)