Flying over Eyjafjallajökull, the Icelandic volcano that’s brought Europe’s air travel to a halt, is not for the fainthearted. And there may be worse to come. 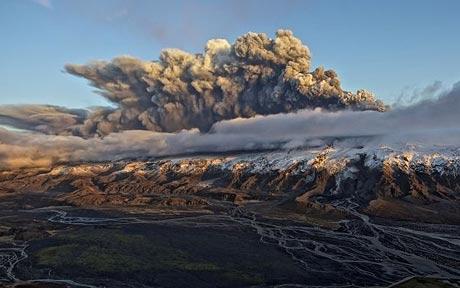 Fresh eruptions thrust new torrents of molten rock through the shattered ice sheets in the mountain crater, spewing a towering wall of ash, dust and steam high into the air. Photo: SIGURSTEINN BALDURSSON

The power and wrath of Eyjafjallajökull came into dramatic clarity this weekend as the clouds parted for the first time since the glacier-topped volcano threw world air travel into turmoil.

Fresh eruptions thrust new torrents of molten rock through the shattered ice sheets in the mountain crater, spewing a towering wall of ash, dust and steam high into the air.

I was aboard a small six-seater helicopter carrying the first civilian passengers to approach the scene when coastguard observers operating aircraft high above warned the pilot to be wary of the latest barrage of explosions.

The plumes dwarfed the helicopter as we flew above a river bed dotted with thousands of cannon-balled sized lumps of ice left behind the previous day when an earlier eruption set off a glacial flood.

Strong winds whipped the shroud of black, grey and white hues as it soared up to 20,000 ft high above the ring of cloud that clung to the ice-clad mountain top.

The power of the blasts has carried the ash – a potent threat to plane engines – even further upwards into the North Atlantic jet-stream that passes over the island near one of the world’s busiest flight paths.

It is a rare combination and it was clear that for now at least Eyjafjallajökull was not easing up. Icelandic volcanologists told The Sunday Telegraph that it was impossible to predict how long the eruptions would continue or whether an even more violent neighbouring volcano might follow suit – as it has in the past.

Iceland, Europe’s youngest country, sits atop the Mid-Atlantic Ridge fault line between two great shifting tectonic plates and the primal landscape of glacial valleys, snowy volcanoes and bubbling geysers is still being shaped by these explosive forces deep below the surface.

From the hot tubs outside the log cabins of the Hotel Ranga, a staging post for coastguard pilots, volcanologists and amateur enthusiasts, this looks like the greatest show on earth right now.

But the display of natural force that has unfolded in recent days has brought misery to millions of stranded passengers, raised concerns about the economic impact of a protracted disruption of international travel and forced hundreds of locals to evacuate their homes.

“This is not even a major eruption, so it is startling to see the impact it has had,” said Matthew Jones, a British glacier expert who monitors volcanic activity at the Icelandic meteorological office.

Eyjafjallajökull is indeed not one of the biggest or most volatile of Iceland’s 22 active volcanoes. But the precedents suggest that Britain and its European neighbours could face the fall-out for weeks or months to come.

Hidden from the our view by the mushroom of volcanic debris lies an even greater threat, the much larger crater of nearby Katla – named for its ferocity after a powerful witch in an ancient Icelandic saga.

Eyjafjallajökull has only erupted three times since the Vikings settled the island in the ninth century, most recently nearly two centuries ago when it blew intermittently for 14 months in the early 1820s- an alarming enough prospect for air traffic across the Atlantic.

And each occasion, it has been followed within months or a year or so by a major eruption at Katla. That volcano has also blown another 20 or so times in its own right, on average once every 60 to 80 years – so another is long overdue as it last exploded in 1918.

That eruption dwarfed what the world has seen from Eyjafjallajökull in recent days, producing about 10 times as much molten rock and throwing ash an estimated 60,000 ft into the sky.

Mr Jones said there is no evidence so far of ground rumblings beneath Katla – the usual harbinger of an eruption. “But we do know from past ash layers that are embedded together that the two volcanoes seem to be interconnected in the timings of previous explosions,” he said.

Magnus Tomi Gudmundsson, a geophysicist at the University of Iceland and expert on volcanic ice eruptions, said activity had intensified at the volcano on Friday. As winds have cleared visibility, a team of scientists hope to fly over the crater this weekend to assess how much ice has melted.

“We really don’t have any means to determine how long this eruption might last or whether it would erupt again,” he told The Sunday Telegraph.

“There’s an increased likelihood we’ll see a Katla eruption in the coming months or year or two, but there’s no way that’s certain.” The eruptions have wreaked havoc for the farmers who raise sheep, cattle and horses on the pastures around the volcano. Lava is not the danger here, but rather the floods set off as the molten rock melts the glacier that fills the crater.

Locals received automated text message and phone calls instructing them to evacuate three times – once because of the initial explosion and twice because of floods. And on the south-east side, properties remain shrouded in dust and there are fears for the welfare of animals that ingest the glass-like shards of ash.

Thorkell Eiriksson and Anna Runolfsdottir have watched the drama unfold from their farmhouse, the nearest property to Eyjafjallajökull, where they live with their two young children.

“The lava from the eruption in March just looked like a pretty little candle twinkling in the distance,” said Mr Eiriksson. “But when we felt the earthquakes last week, we knew this one was very different. It’s just surreal to sit here and watch the plumes of ash up there and think of the chaos this is causing around the world.”

By Philip Sherwell at the Eyjafjallajökull volcano, southern Iceland
Published: 7:00AM BST 18 Apr 2010