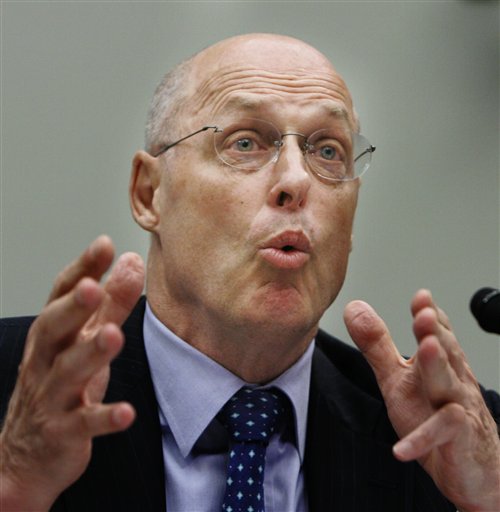 FILE – In this June 20, 2007 file photo, Treasury Secretary Henry Paulson testifies on Capitol Hill in Washington, before a House Financial Services Committee hearing on the state of the international financial system. The government has accused Goldman Sachs & Co. of defrauding investors by failing to disclose conflicts of interest in mortgage investments it sold as the housing market was faltering Friday, April 16, 2010. (AP Photo/Manuel Balce Ceneta, file)

WASHINGTON (AP) — The government has accused Goldman Sachs & Co. of defrauding investors by failing to disclose conflicts of interest in mortgage investments it sold as the housing market was faltering.

The Securities and Exchange Commission said in a civil complaint Friday that Goldman failed to disclose that one of its clients helped create — and then bet against — subprime mortgage securities that Goldman sold to investors.

Investors in the mortgage securities lost more than $1 billion, the SEC said. The agency is seeking to recoup profits reaped on the deal.

Goldman Sachs denied the allegations. In a statement, it called the SEC’s charges “completely unfounded in law and fact” and said it will contest them.

The charges come as lawmakers seek to crack down on Wall Street practices that helped cause the financial crisis. Among proposals Congress is weighing are tougher rules for complex investments like those involved in the alleged Goldman fraud.

The Goldman client implicated in the fraud is one of the world’s largest hedge funds, Paulson & Co., which paid Goldman roughly $15 million for structuring the deals in 2007.

Goldman Sachs shares fell more than 13 percent after the SEC announcement, which also caused shares of other financial companies to sink. The Dow Jones industrial average fell more than 140 points in midday trading.

The civil lawsuit filed by the SEC in federal court in Manhattan was the government’s most significant legal action related to the mortgage meltdown that ignited the financial crisis and helped plunge the country into recession. The SEC’s enforcement chief said the agency is investigating a broad range of practices related to the crisis.

The agency also charged a Goldman vice president, Fabrice Tourre, 31, who it said was principally responsible for devising the deal and marketing the securities.

The SEC is seeking unspecified fines and restitution from Goldman Sachs and Tourre.

Asked why the SEC did not also pursue a case against Paulson, Enforcement Director Robert Khuzami said: “It was Goldman that made the representations to investors. Paulson did not.”

Goldman told investors that a third party, ACA Management LLC, had selected the underlying mortgages in the investment. But, the SEC alleges, Goldman misled investors by failing to disclose that Paulson & Co. also played a role in selecting the mortgages and stood to profit from their decline in value.

“Goldman wrongly permitted a client that was betting against the mortgage market to heavily influence which mortgage securities to include in an investment portfolio, while telling other investors that the securities were selected by an independent, objective third party,” Khuzami said in a statement.

The SEC charges come after Goldman Sachs denied last week it bet against clients by selling them mortgage-backed securities while reducing its own exposure to them.

In an annual letter to shareholders, Goldman said it began reducing its exposure to the U.S. mortgage market in late 2006. It said it did so by selling mortgage investments or buying credit default swaps. The swaps are a form of insurance that pays out if the value of the underlying asset declines.

Those hedges, also known as short positions, served Goldman well. As the housing market began cratering and losses piled up for other big banks, Goldman suffered less damage. That led to criticism that the bank benefited at the expense of clients who bought mortgage-backed securities that became toxic. Goldman denied that.

“Our short positions were not a ‘bet against our clients,'” Goldman said in the letter. “Rather, they served to offset our long positions. Our goal was, and is, to be in a position to make markets for our clients while managing our risk within prescribed limits.”

In the letter, Goldman also rejected claims that it profited from the mortgage market meltdown.