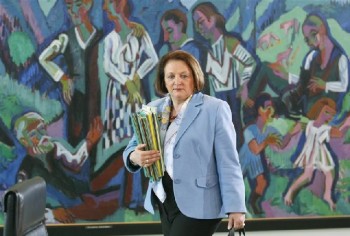 Sabine Leutheusser-Schnarrenberger at the chancellery in Berlin March 3, 2010/Thomas Peter

Germany’s justice minister accused the Vatican today of covering up severe sexual abuse in the Church after fresh reports surfaced at three Catholic schools in Bavaria.

Sabine Leutheusser-Schnarrenberger called the developments “frightening” after the cathedral choir in Regensburg, the Benedictine monastery school at Ettal and a Capucian school in Burghausen revealed new cases of sexual and physical abuse.

The revelations followed reports last month that Catholic priests had sexually abused over 100 children at Jesuit schools around Germany, which led to a public apology from Archbishop Robert Zollitsch, head of the German Bishops Conference.

“In many schools there was a wall of silence allowing for abuse and violence,” Ms Leutheusser-Schnarrenberger, a secular liberal politician who has been the government’s leading critic of the Church, told Germany’s Deutschlandfunk radio.

“Even the most severe cases of abuse are subject only to papal secrecy and should not be disclosed outside the Church,” she said, citing a 2001 Catholic congregation directive.

“Our guidelines insist that we involve state prosecutors,” he told the Frankfurter Allgemeine Zeitung newspaper.

Pope Benedict, himself a German, summoned Irish bishops to he Vatican last month for a reprimand over a paedophilia scandal after the Murphy report said Church leaders had covered up widespread abuse of children by priests for 30 years.

Dozens of Catholics in the Netherlands have since come forward to report alleged sexual abuses by priests, often decades ago, after media coverage of the Irish and German cases.

The Vatican has said it fully supports the diocese of Regensburg’s decision last week to openly investigate its abuse cases, according to Vatican newspaper L’Osservatore Romano.

Ms Leutheusser-Schnarrenberger does not advocate lengthening the statute of limitations on sex abuse crimes, now 20 years.

Leading conservatives have all called for a longer period.

A government spokesman said today that it was important to continue the discussion over statute limitations.

The justice minister also urged the Church to take part in a public discussion with political leaders and victims on the issue that could potentially include compensation, a call she has made previously.

Bishop Ackermann backed the idea of such a round-table discussion on April 23rd, as suggested by family minister Kristina Schroeder.

“The minister’s invitation is an important step towards the common goal of addressing the problem quickly,” he said.

Archbishop Zollitsch had previously rejected the idea, and accused the justice minister of bashing the Church. He is due to travel to the Vatican on Friday to discuss the abuse scandal.