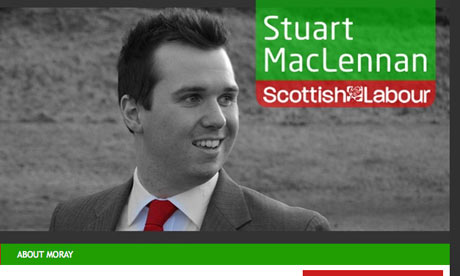 Stuart MacLennan, Labour candidate for Moray (age 24), has been removed in short order after his Twitter account was unearthed by the press.

Here are some of his remarks:

“God this fairtrade, organic banana is s**t. Can I have a slave-grown, chemically enhanced, genetically modified one please?”

“Made my connecting train. No first class it would appear. Sitting opposite the ugliest old boot I’ve ever seen too.”

“Lots of chavs at Stirling station.”

Into the bargain, he called the elderly “coffin dodgers” and repeatedly lamented having to drive so far north to Moray.

Oh, the dangers of social media! Earlier today he admitted tweeting “silly” and “offensive” messages and said he was sorry.

His followers included John Prescott, Sarah Brown and Downing Street itself – though the account has, alas, now been suspended.