As Zerohedge reports, unless someone is playing with the Bloomberg data, you can put a fork in these guys: 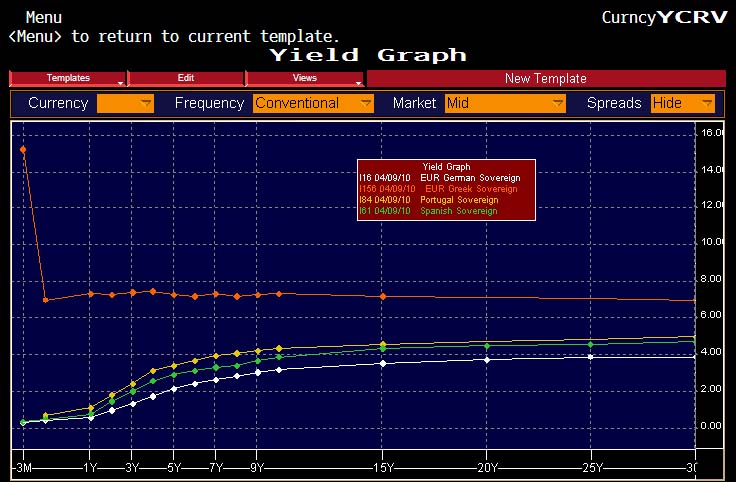 That’s a 3-month yield of about 15% – an inversion that says that Greece blows to beyond the orbit of Mars within the next 90 days.

If there’s any validity to this they’re done, probably this weekend or some time next week, when they have an auction they have to roll.

Everyone who has bought their recent auctions has been trashed within days, with yields backing up almost immediately.  That is, people have been railroaded into dramatically overpaying as a consequence of jawboned “confidence measures” that in point of fact are not worth a warm bucket of spit.

Greece needs to pull out of the Euro now and take the hit.  There is a point beyond which the spiral tightens beyond all reason, and they may already be into the vortex too far to do anything meaningful, but this much is certain – the longer they delay the worse it’s going to get.

PS: Greece’s deficit spending as a percentage of GDP (~12.5% this year) looks a lot like ours, which is right around 11% at present.  Is anyone in Washington DC paying attention to what’s happening over there?

PPS: Bloomberg is apparently reporting news of a bailout.  Just remember that the media has reported this “news” continually for the last month and yet no bailout has materialized.  That’s because if they do, Spain and Portugal is right behind Greece, shortly followed by Ireland and Italy.

There is no capacity, irrespective of political will, to bail them all out.

PPPS: Greek Debt cut to BBB- by Fitch, outlook negative.  The market sez: Show us that bazooka now or…..