Germany’s Bundesbank has fired a warning shot at Chancellor Angela Merkel, attacking the joint EU-IMF rescue plan for Greece as a threat to economic stability and probably illegal. 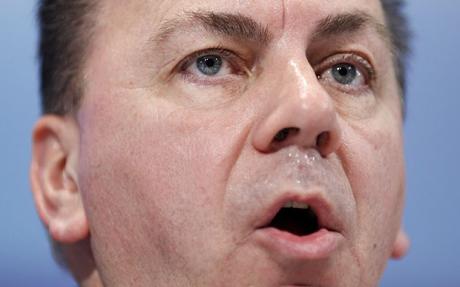 The Bundesbank, headed by ultra-hawk Axel Weber, said the decision to bring in the IMF makes matters worse, arguing that the EU would impose tougher budgetary discipline. Photo: Reuters

Leaked extracts from an internal report appeared in the Frankfurter Rundschau and may have contributed to a fresh day of mayhem for Greek bonds. Investors were already digesting reports that Greek residents had shifted €10bn (£8.8bn) abroad over the first two months of the year.

The yield on two-year Greek bonds surged by 136 basis points in early trading to 8.3pc, up from 5.2pc last week. The market stabilised later as Athens announced a 40pc cut in the budget deficit over the first quarter, suggesting that austerity measures are bearing fruit.

The Bundesbank document offers a withering critique of the deal agreed by EU leaders two weeks ago, saying the plan had been cobbled together without consulting central banks and will lead to monetisation of debt. “It brings problems in respect to stability policy that should not be underestimated.”

The joint rescue between the IMF and the EU would turn the Bundesbank into a “money-printing machine” for the purchase of Greek bonds, according to Rundschau. This would breach the EU’s ‘no-bail clause’.

Hans Redeker, currency chief at BNP Paribas, said the report greatly strengthens the hand of EMU critics in Germany. A group of professors is already itching to file a complaint at the constitutional court to block the Greek rescue. “This reduces Merkel’s room for manoeuvre to zero,” he said.

The Bundesbank, headed by ultra-hawk Axel Weber, said the decision to bring in the IMF makes matters worse, arguing that the EU would impose tougher budgetary discipline.

The report mocked the IMF as the “Inflation Maximising Fund”, saying the body had gone soft under Dominique Strauss-Kahn, a French socialist and Keynesian. It has shifted focus from fiscal cleansing to “growth-oriented” financial policies. “Currency reserves from the Bundesbank cannot plausibly be made available for such purposes,” it said.

At the least, it will be hard for Mrs Merkel to relax her insistence on “market rates” for any loans to Greece. Officials have talked of a figure near 6pc to avoid moral hazard but this has angered Greece. It hopes to borrow below 4.5pc like Portugal or Ireland. A Greek government spokesman said yesterday that “barbarous conditions” were being imposed on his country.

Jean-Claude Trichet, the president of the European Central Bank, played down talk of a continued rift between Berlin and Brussels, saying the EU agreement to help Greece was “a very, very serious commitment: nobody should take lightly a statement which is signed by the heads of state.”

“Taking all the information I have, a default is not an issue for Greece,” he said, speaking after the governing council’s meeting. The bank left rates at a record low of 1pc.

Laurent Bilke, Europe economist at Nomura and a former ECB official, said Greece is effectively shut out of the market. “We consider it increasingly likely that the Greek government will be forced to change strategy and ask for a rescue. There is really no point waiting for an ‘accident’ to happen.”

Barclays Capital said any rescue would have to be at least €40bn-€45bn to restore confidence and provide Greece the funding it needs to buy time for reform.

As expected, the ECB delayed plans to tighten to its collateral rules, eliminating the risk that Greek banks will lose their lifeline from Frankfurt’s lending window for another year. The IOBE think-tank said ECB funding for Greek banks has risen to €65bn over the first quarter. ECB will impose a penalty “haircut” on lower grade bonds, but not sovereign debt. This is a subtle way to help Greece and Italy and other big debtors.

Julian Callow at Barclays said the Greek gyrations have disguised the good news that contagion has not spread to Club Med and Ireland. “Greece is being treated as a case apart because it entered the crisis with a debt that was already so high. Ireland has managed to insulate itself despite the costs of its banking sector,” he said.

If anything, the eurozone looks stronger after the events of the past two weeks. Analysts say there is no necessary reason why a Greek default – if it happened – would in itself damage monetary union.

x-ref to markets b7