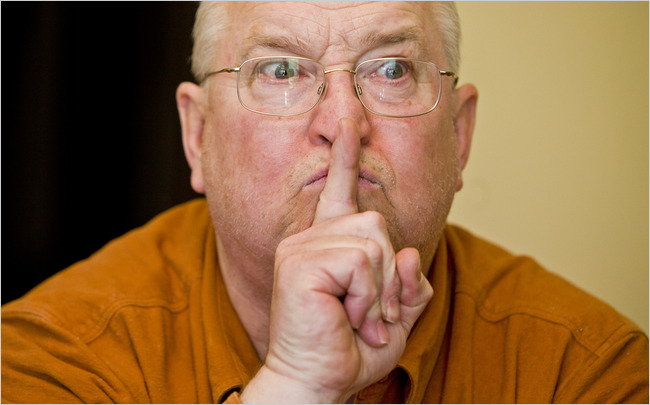 “That man should have been in prison for a very long time, but he was lucky,” Steven Geier, one of Father Murphy’s victims, said Thursday. “What about me? I wasn’t supposed to touch girls. What gave him the right to be able to do that? Father Murphy constantly thought about sex with children, and he got away with it.”

Young victims of sexual abuse are often so confused, ashamed or traumatized that they wait years to report the violations. Some never say a word. One of the remarkable aspects of the Father Murphy case is that young victims began alerting the authorities in the mid-1950s, when sexual abuse was hardly even a part of the public vocabulary.

In his ranch house in Madison, where he lives with his wife, Ann, and two dachshunds, Mr. Geier said through an interpreter that he entered St. John’s School for the Deaf in St. Francis, Wis., when he was 9. His father had helped build a Catholic church in rural Dane County, and his aunt was a nun. His family wanted him to get a good education in a Catholic school.

Mr. Geier, now 59, said that between the ages of 14 and 15, starting around 1965, Father Murphy molested him four times in a closet at the school. The priest, a hearing man fluent in sign language, said that God wanted him to teach the boy about sex but that he had to keep it quiet because it was under the sacrament of confession. Mr. Geier said he felt sick.

“First thing in the morning,” Mr. Geier said, “we took communion, and as he passed out the communion wafers, I thought about how many boys did he touch with those hands and all of the germs, all of the filth of his hands.”

Father Murphy may have molested as many as 200 boys while he worked at the school from 1950 to 1974, according to the accounts of victims and a social worker hired by the Archdiocese of Milwaukee to interview him.

Mr. Geier said he first tried to tell the priest at his home parish in Madison, where he served as an altar boy, in 1966 when he was just 16. But the priest, he said, told him he did not want to hear about it, and to just forget about it. He told another priest while he was still a teenager, and yet a third priest years later, after he married.

That priest, the Rev. Tom Schroeder, 72, who led Masses for the deaf in Madison from 1970 to 1992, said in an interview Friday that he remembered Mr. Geier’s telling him about Father Murphy. Father Schroeder said that he told a nun, who told another nun who was a dormitory supervisor at St. John’s, but that the supervisor did not believe it and nothing ever came of it.

“I assumed that if enough people told her, she would finally believe it,” Father Schroeder said.

Internal church correspondence unearthed in a lawsuit against the Archdiocese of Milwaukee and given to The New York Times, which made it public it this week, included a letter from the Rev. David Walsh, who served as a chaplain for the deaf in Chicago, saying that teenage students at St. John’s had told him in the late 1950s about Father Murphy’s abuse.

Father Walsh said he told Archbishop Albert Gregory Meyer of Milwaukee, who sent Father Murphy on a retreat and then put him back in the school to undo “the harm he had done.”

In the 1970s, a group of former students who were in a vocational rehabilitation program in Milwaukee began telling their hearing supervisors about Father Murphy, a sequence of events reported in two articles in The Milwaukee Journal Sentinel in 2006.

Among the supervisors was John Conway, now the deputy administrator of workers’ compensation for the State of Wisconsin. Mr. Conway, the students and others collected affidavits from 15 to 20 former students about Father Murphy’s violations. They were granted a meeting with Archbishop William E. Cousins.

“In my extreme naïveté,” said Mr. Conway in an interview on Friday, “I told them the archbishop would take care of this.”

He said they were surprised to find the room packed with people, including several nuns and teachers from the school, two priests who said they were representing the apostolic delegate in Chicago, and Father Murphy himself.

Arthur Budzinski and Gary Smith, two more victims of Father Murphy, said in an interview last week that they remember seeing Archbishop Cousins yell, and Father Murphy staring at the floor. The deaf men and their advocates were told that Father Murphy, the school’s director and top fund-raiser, was too valuable to be let go, so he would be given only administrative duties.

They were outraged. They distributed “Wanted” posters with Father Murphy’s face outside the cathedral in Milwaukee. They went to the police departments in Milwaukee, where they were told it was not the correct jurisdiction, and in St. Francis, where the school was located, Mr. Conway said. They also went to the office of E. Michael McCann, the district attorney of Milwaukee County, and spoke with his assistant, William Gardner.

“A criminal priest was an oxymoron to them,” Mr. Conway said. “They said they’ll refer it to the archdiocese.”

Calls to Mr. McCann and Mr. Gardner this week were not returned.

Mr. Conway said it was only when they filed a lawsuit that the archdiocese removed Father Murphy from St. John’s and sent him to northern Wisconsin to live at his family’s summer house. The lawsuit was withdrawn. Mr. Smith, one of two of the plaintiffs whose cases were still within the statute of limitations, received a settlement of $2,000, he and Mr. Conway said.

Father Murphy continued working in parishes and schools, with deaf people, and leading youth retreats in the Diocese of Superior for the next 24 years.