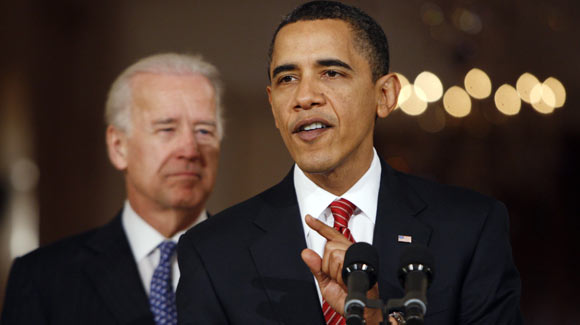 President Obama, with Vice President Joe Biden, makes a statement to the nation after the passage of healthcare legislation. “We rose above the weight of our politics,” he said. (Pablo Martinez Monsivais / Associated Press / March 21, 2010)

March 22 (Bloomberg) — The U.S. House passed the most sweeping health-care legislation in four decades, rewriting the rules governing medical industries and ensuring that tens of millions of uninsured Americans will get medical coverage.

President Barack Obama will sign the health-care package into law at the White House tomorrow, said an administration official who spoke on condition of anonymity because it hasn’t been publicly announced.

Yesterday’s 219-212 vote marks a victory for Obama. Only Democrats voted for the legislation, underscoring a partisan divide that promises to make health care the defining issue in November’s congressional elections.

Lawmakers hailed the action as a historic follow-up to the 1965 creation of the Medicare program (which is broke!) for the elderly and a way to mitigate soaring health costs that make up a sixth of the U.S. economy. It came after a last-minute deal with anti- abortion Democrats and a lobbying trip by Obama to the Capitol.

“It’s a victory for the American people,” Obama told reporters at the White House just before midnight. “This legislation will not fix everything that ails our health-care system but it moves us decisively in the right direction. This is what change looks like.”

House Speaker Nancy Pelosi described the passage as “history for our country and progress for the American people.”

To finish their work on health care, House Democrats approved a Senate bill passed in December and then voted 220-211 to pass a measure that would amend the Senate legislation to fix provisions they don’t like. The Senate must also pass this second bill under a budget process called reconciliation that requires a simple majority vote.

While Senate Democrats plan to act this week on the second bill, they face a host of challenges from Republicans that may hold up their work or force a new vote in the House.

The two bills together will cost $940 billion over 10 years and cover 32 million uninsured Americans, the Congressional Budget Office estimated. That’s more than made up for with a new tax on the highest earners, fees on health-care companies and hundreds of billions of dollars in Medicare savings, which will reduce the federal deficit, the CBO said.

Companies such as health insurer WellPoint Inc. of Indianapolis, medical-device maker Medtronic Inc. of Minneapolis and drugmaker Pfizer Inc. of New York will get millions of new customers with the extension of coverage. Their industries will also face billions of dollars in new fees.

As part of the overhaul, drugmakers agreed to help the elderly more easily afford medicines. Insurers, which opposed the legislation, will have to take all customers, regardless of pre-existing conditions, and face limits on how much revenue can be spent beyond covering medical expenses.

“WellPoint is disappointed that after more than a year of debate, Congress has approved health-care legislation that does little to reduce cost and improve quality,” company spokeswoman Kristin Binns said in an e-mail to reporters.

Under the bill, Americans will have to buy insurance or pay a penalty, with the possibility of tapping new purchasing exchanges and government aid for lower-income Americans.

Republicans said the costs will balloon, criticized the increases in government programs and held out the possibility that private insurance and medical care would be hurt.

“We are looking at a health-care bill that nobody in this body believes is satisfactory,” House Minority Leader John Boehner said prior to the vote. “We have failed to reflect the will of our constituents.”

Business groups, including the U.S. Chamber of Commerce, also lobbied against the legislation, and Peoria, Illinois-based Caterpillar Inc. sent a letter to leaders saying the bills would raise its costs by $100 million in the first year alone.

The House’s two-step process became necessary after Democrats lost the 60th vote in the Senate generally needed to push through major legislation.

The use of the budget-reconciliation tool opens the door for the Senate to pass the second bill with 51 votes, as long as it can withstand Republican challenges and the rulings of a parliamentarian, who will take out any provision he decides have only an incidental impact on the federal budget.

New Hampshire Senator Judd Gregg, who will help coordinate the Republicans’ efforts, said his party can put forth “massive amounts” of amendments on unrelated issues from gun control to immigration. They can also challenge provisions such as the scaling back of a tax on high-end, or so-called Cadillac, insurance plans because it would affect money flowing into Social Security, he said.

Any changes in the Senate would force a new House vote on the reconciliation bill, further complicating the effort. House Democrats particularly wanted to change the Cadillac tax because they say it would affect too many workers.

“If those people think they’re only going to vote on this once, they’re nuts,” Senator Orrin Hatch, a Utah Republican, said in a Bloomberg Television interview last week.

Illinois Senator Richard Durbin, a member of the Democratic leadership, said yesterday his party is prepared for challenges and any amendments Republicans might file.

“We’re ready to tackle that if that’s what they want to do,” Durbin said on CBS’s “Face the Nation” program. “We’re ready to deal with honest amendments. There will come a time when the American people say enough, this is about politics.”

Former President Bill Clinton, standing in for Obama as the closing speaker at the Washington Gridiron Dinner March 20, praised him for pushing for the legislation. Clinton cited Machiavelli’s “The Prince,” when framing the challenge.

Obama, who faced criticism for largely leaving the drafting of the legislation to Congress, swung into high gear in recent weeks. He hosted a Feb. 25 bipartisan summit at the White House, proposed detailed final compromises and lobbied dozens of undecided Democrats. He postponed a trip to Asia to remain in Washington for yesterday’s vote.

Obama benefited in part from the votes of Democrats who are leaving Congress and who were willing to switch sides after voting “no” on a House version in November.

He also won support from Democrats, including Representative Dennis Kucinich of Ohio, who had threatened to oppose the final measure because it didn’t include a new government program, or public option, to compete against private insurers.

The legislation will expand the Medicaid government program for the poor to cover those making up to 133 percent of the federal poverty level, and offer subsidies for millions of other Americans to buy insurance through an online exchange offering policies at more-affordable group rates.

Many employers with more than 50 workers that don’t offer coverage will be subject to a penalty. The reconciliation bill will change the penalty to $2,000 per worker, from $750 in the Senate bill, and subtract out the first 30 employees.

The overhaul is financed in large part through new taxes. The reconciliation bill would add a 3.8 percent Medicare tax on investment income imposed on individuals who earn more than $200,000 a year and joint tax filers who have more than $250,000 in earnings. That adds to a higher Medicare payroll tax already in the Senate bill.