Families have been warned by the Bank of England to expect an effective pay cut in the coming months because of the economic climate.

And the Bank of England banksters should know what they are talking about, because with their quantitative easing (= creating money out of thin air = printing money = increasing the money supply = creating inflation.) policy they are destroying the pound!

Inflation is a hidden tax on monetary assets. 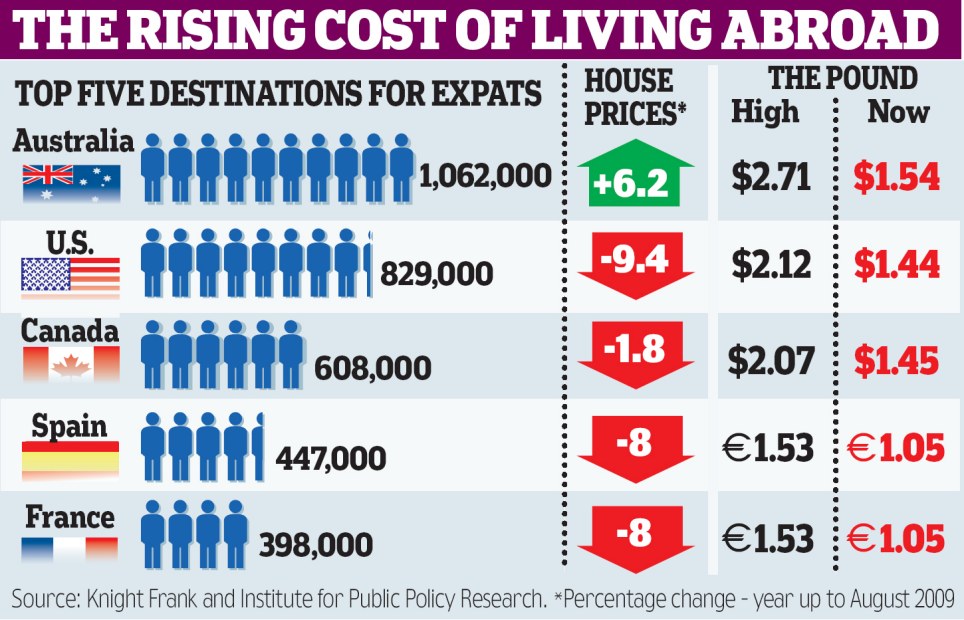 Almost 4million Brits living abroad are planning a mass return to home shores after seeing their savings and income stripped by the plunging values of the pound and their property.

The dramatic slump has slashed their income by a third and has turned Brits into the paupers of Europe.

Some 845,000 Brits living in Spain and France have suffered an 8 per cent drop in house prices in the year to August 2009 alone. This wiped €30,000 off the average property on the Costa del Sol.

Sterling has slumped from over €1.50 to £1 in January 2007 to close to parity, taking a terrible toll on the estimated 5.5million British expats, and particularly the 1.1million pensioners living abroad. Moneycorp research shows that 70 per cent of all expats are now considering returning to the UK.

A retired couple living in Spain, for example, both drawing a full state pension of £95.25 per week, will have seen their combined monthly income – on their pension alone – drop by €396 over three years, from €1,263 to €867.

The warning signs that hundreds of thousands of Brits may be ready to return to the UK started when the credit crunch began in 2008. That year, the number of expats returning home jumped by a fifth on the previous 12 months.

The number of British homeowners downsizing or selling up and sending money back to the UK doubled last year, foreign currency specialist HiFX reports.

Mark Bodega from HiFX says: ‘The pound’s fall to historic lows in recent months has meant the cost of living or running a holiday home on the continent has risen to unaffordable levels for many people.’

A weak property market is also proving to be a nightmare for many of the estimated 1.5million Brits who own homes abroad. Many are being forced to sell their property at a loss, particularly in countries like Spain.

The weak pound has proved a blessing for those who receive an income in euros, for example from renting a property. Sterling’s slump means they will get far more pounds for their euros.

Brennon Nicholas, managing director at estate agency Cluttons Spain says: ‘We have seen an increase in the number of people coming to us who are struggling because their pensions and savings do not stretch as far as they used to. They’re selling up because of the favourable exchange rate but the market is extremely tough and there is a lack of buyers.’

Pensioners abroad have arguably been hit the hardest as they rely most heavily on their savings and pensions built up in the UK. They’ve been hit by a declining pound and falling interest rates.

One in five expats claims a sterling pension, with more than a quarter of Brits living in Spain (28 per cent) and a third of British expats in Germany relying on this as their core source of income, according to Moneycorp.

More than half a million pensioners living in Commonwealth countries such as Australia, Canada and New Zealand suffer a further blow because their state pensions don’t rise each year in line with inflation.

Only those living in the European Economic Area and countries with reciprocal agreements in place with the UK, such as the U.S. and Jamaica, are protected against inflation. Yesterday, these pensioners lost their fight in the European Court of Human Rights to prove this pension freeze violates anti-discrimination rules.

Tim Finch, head of migration at think tank the Institute for Public Policy Research says: ‘The weakness of the pound will mean more people will lose jobs and find it harder to live overseas and come home. This is likely to be a growing trend over the next few years.

‘Generally, the big wave of lifestyle emigration where people got their place in the sun for a better life was a reflection of the boom years when you had high house prices and decent pensions.’