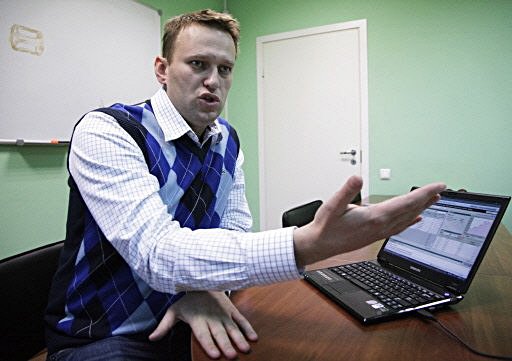 MOSCOW — It started with a golden bed and African drummers and led to Russia’s latest, surprising, political duel pitting tenacious bloggers against bureaucrats whose excesses went a step too far.

Russians typically shrug their shoulders at the lavish lifestyles of government officials, assuming nothing can be done about bureaucrats who take bribes and pocket state funds.

But when Russia’s interior ministry announced plans to buy a golden bed, it raised an outcry — and revealed the potential of the Internet for stirring up outrage against entrenched corruption.

While the docile, state-dominated media looks the other way, a small but determined group of Russian bloggers is challenging corrupt bureaucrats, rallying public opinion and goading prosecutors into action.

“I didn’t expect the blog to become so popular,” said Alexander Malyutin, who runs a blog devoted to exposing suspicious government tenders, including the interior ministry’s infamous golden bed purchase.

Last August, the ministry announced plans to buy 24 million rubles (800,000 dollars) worth of furniture, including a bed “covered with a thin layer of 24-carat gold,” according to the official tender documents.

The documents were posted deep within a website where all the government’s purchases must be published, under a law passed in 2005 during one of the Kremlin’s periodic efforts to root out corruption.

After bloggers and journalists exposed the plans, the ministry defended itself from ridicule by saying the bed was needed for a special VIP guesthouse in Moscow where it hosts foreign officials.

Malyutin’s blog, zakupki_news, which takes its name from the Russian word for “purchases,” helped draw attention to the golden bed and other dubious expenditures of taxpayer money.

Those have included plans by a Saint Petersburg astronomy institute to buy a Mercedes and by the governor of Russia’s far eastern Sakhalin province to bring African drummers from Burundi to perform at his annual New Years party.

Both those tenders were canceled after outcries in the blogosphere, but the golden bed purchase went ahead.

“In many cases there was no violation of the law, just shameless behaviour. The golden bed tender was legal and funding was officially allocated for it,” said Malyutin, who works as editor of the news website Marker.ru.

Last year, Russia was ranked 146th, alongside Zimbabwe and Sierra Leone, in a list of relative levels of corruption in countries around the world compiled by global graft watchdog Transparency International.

Perhaps the most fearless of Russia’s anti-graft bloggers is Alexei Navalny, a lawyer who takes on state-run companies like gas giant Gazprom and oil firm Rosneft, which have close ties to Putin.

Navalny, 33, uses his status as a minority shareholder in the big state-run companies — he owns several thousand dollars worth of stock in them — to badger their management teams for greater transparency.

“I hate the system of power in this country. I think it’s absolutely corrupt and it’s causing the country to fall apart,” Navalny said.

In November, Navalny announced the results of a lengthy investigation he had conducted into Russia’s second-largest bank, VTB, which is 85 percent owned by the state.

In a blog post, he accused VTB managers of embezzling 150 million dollars in a complex scheme involving the leasing of 30 Chinese oil rigs.

He followed up the original post with a video detailing the allegations that has been viewed more than 100,000 times on YouTube.

The video begins with a giant VTB logo hovering menacingly over the Earth to the music from the “Star Wars” films, and ends with footage of an snowy yard in Russia’s far north where the oil rigs are rusting away, unused.

VTB says the managers involved in the scheme have been sacked but insists there is no need for criminal charges.

Moscow prosecutors are deciding whether to open an investigation, following a letter-writing campaign from Navalny and his supporters.

VTB bosses and their government allies “are very irritated by this public discussion,” said Navalny, who was formerly an active member of Yabloko, a liberal political party, but now avoids electoral politics.

“The major television channels are structures which serve the interests of the bureaucracy,” said Kabanov, head of the National Anti-Corruption Committee, a non-governmental organisation.

But Kabanov added that the Internet’s impact on public opinion was limited since it reached only a small part of Russia’s population.

Some 30 percent of Russians have Internet access at home, far less than in Western countries, according to a study released this month by the GfK market research company.