‘Washington is shifting the burden of bad choices today onto the backs of our children and grandchildren,” Obama said in a 2006 floor speech that preceded a Senate vote to extend the debt limit. “America has a debt problem and a failure of leadership.’ 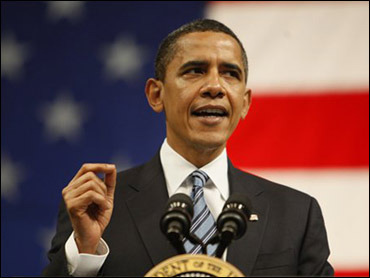 The latest posting from the Treasury Department shows the National Debt has increased over $2 trillion since President Obama took office.

President George W. Bush still holds the record for the most debt run up on his watch: $4.9 trillion. But it took him over four years to rack up the first two trillion dollars in debt. It has taken Mr. Obama 421 days.

But the Obama Administration routinely blames the Bush Administration for inheriting a budget surplus and turning it into years of record-breaking deficits and debt — and then leaving it on the doorstep of the new president.

“I walked into office facing a massive deficit, most of which was the result of not paying for two wars, two tax cuts, and an expensive prescription drug program,” Mr. Obama said last month in a speech to corporate executives at a Business Roundtable conference.

“When we walked in, we had a deficit of $1.3 trillion and projected debt over the course of a decade of $8 trillion,” he told the CEOs on February 24th. “The lost revenue from this recession put us in an even deeper hole. And the steps we took to save the economy from depression last year have necessarily added to the deficit — about $1 trillion, compared to the $8 trillion that we inherited.”

The most the administration says it can do is try to slow the growth of the National Debt – but its own forecasts show it doesn’t look promising.

In the 2011 federal budget released last month, the administration projects the National Debt will soar ever upward to over $25 trillion in the year 2020. The total debt will amount to more than 100 percent of the national economy as early as 2012.

Mr. Obama frequently argues that one of his reasons for seeking to overhaul health care coverage in America is the costs it imposes on the government. He says “the status quo on health care is simply unsustainable.”

He warns that if his health care plan is not enacted, “our government will be plunged deeper into debt.”

In the belief that politicians lack the resolve to make the tough decisions needed to reduce annual deficits and slow the growth of the debt, the president signed an Executive Order last month creating a National Commission on Fiscal Responsibility and Reform to recommend steps the government can take to balance the budget by 2015 – excluding interest payments on the National Debt.

Mr. Obama set a December 1st deadline for the Commission to vote on its final report.

– US Taxpayers on Hook for $5 Trillion of Fannie, Freddie Debt … No Matter What Barney Frank Says

– Marc Faber on CNN: The Patient is Already Dead