I have told you many times before that Gordon Brown, ‘THE SAVIOR’, is really just another elite puppet prime minister, that is destroying any future that the people of the UK might have had, hand in hand with the Bank of England, that is printing money like mad to destroy the pound.

The BoE calls it ‘Quantitative Easing’, which is creating money out of thin air = pure inflation, which is nothing more than a hidden tax.

Those criminals are looting the taxpayer until there is nothing left.

The same is happening in the US, with their elite puppet President Obama and the Fed.

UniCredit has alerted investors in a client note that Britain is at serious risk of a bond market and sterling debacle and faces even more intractable budget woes than Greece. 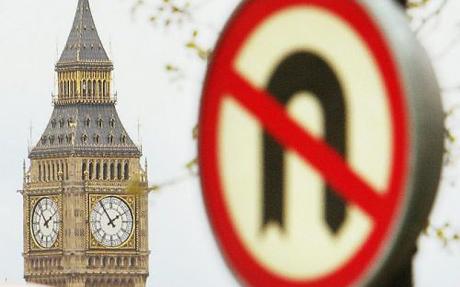 No turning back: Sterling is going to fall further over coming months, warns Unicredit

“I am becoming convinced that Great Britain is the next country that is going to be pummelled by investors,” said Kornelius Purps, Unicredit ‘s fixed income director and a leading analyst in Germany.

Mr Purps said the UK had been cushioned at first by low debt levels but the pace of deterioration has been so extreme that the country can no longer count on market tolerance.

“Britain’s AAA-rating is highly at risk. The budget deficit is huge at 13pc of GDP and investors are not happy. The outgoing government is inactive due to the election. There will have to be absolute cuts in public salaries or pay, but nobody is talking about that,” he told The Daily Telegraph.

“Sterling is going to fall further over coming months. I am not expecting a crash of the gilts market but we may see a further rise in spreads of 30 to 50 basis points.”

Yields on 10-year gilts have already crept up to 4.14pc, compared to 3.94pc for Italian bonds, 3.48pc for French bonds, and 3.19pc for German Bunds, though part of this reflects worries about higher inflation in Britain.

Ian Stannard, currency strategist at BNP Paribas, said markets are fretting over how the UK will cover its deficit following the pause in quantitative easing by the Bank of England. The Bank has absorbed £200bn of debt, more than total Treasury issuance over the last year.

“The UK may have difficulty in attracting extra investors to fill the gap. We think they will have to do more QE as recovery falters,” he said.

BNP Paribas expects sterling to drop to $1.31 against the dollar this year and reach parity against the euro despite troubles in Club Med. “We’re very bearish on the UK,” he said.

Big global banks are divided over Britain’s economic prospects . Goldman Sachs is betting on a turbo-charged recovery as the delayed effects of sterling devaluation kick in. Britain’s trump card is an average debt maturity of 14.1 years, nearly three times US maturities and double those of France. This greatly reduces the risk of a “roll-over” crisis.

UniCredit said Greece is better placed than the UK in coming months even if deficits look comparable. “The polls point to a minority government in the UK, while Greece’s government can count on a majority to push austerity measures through parliament. Secondly, the British tax system offers less leverage for a rise in revenue,” he said.

Paradoxically, Greek tax evasion creates scope for a surge in revenues from tougher enforcement. “It is not out of the question that we will see a positive surprise in Greece: is there any such hope for Britain?” said Mr Purps.

Still, while it is arguable whether a hung Parliament in Britain will lead to policy drift, analysts said Greece was in trouble already. The country was brought to a standstill on Thursday by the second general strike in weeks. Police clashed with rioters , again reducing Athens to a fog of tear gas. Observers said that did not augur well for a nation that has hardly begun its three-year ordeal of draconian cuts.