Too much boob tube also makes you weaker, research shows 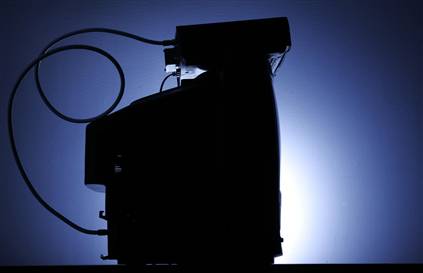 You’ve accepted the idea that TV makes you dumber. You know there are lots of more edifying things you could be doing with your time than cheering on the contestants on “Survivor.”

And unless you’re working out to an exercise video, you know those hours sprawled out in front of the screen are going to make you fatter – not to mention the impact of all that junk food you’ve been tempted to scarf down during the commercial breaks.

But you’ll be surprised to learn the host of other bad things TV can do to you.

2. TV makes you drunker.
TV may make you drink more. When it comes to drinking, we’re apparently very susceptible to what we see on TV, according to a report published in Alcohol and Alcoholism. To discover whether what we view actually affects drinking habits, researchers rounded up 80 male university students between the ages of 18 and 29 and plunked them down in a bar-like setting where the students were allowed to watch movies and commercials on TV. The researchers found that men who watched films and commercials in which alcohol was prominently featured immediately reached for a glass of beer or wine and drank an average of 1.5 glasses more than those who watched films and commercials in which alcohol played a less prominent role.

3. TV can make your kid pregnant.
Teens who watched a lot of TV that included sexual content were twice as likely to get pregnant, according to a study published in Pediatrics. Once a year for three years, Rand Corporation researchers surveyed 1,461 youngsters – ages 12 to 17 at the beginning of the study – about TV-viewing habits and sexual behavior. Boys were asked if they had ever gotten a girl pregnant and girls were asked if they had ever been pregnant. To get a handle on how much sexually charged TV kids were watching, the researchers asked teens if and how often they viewed 23 specific programs.

Another study showed that kids who watch two or more hours of TV a day start having sex earlier, according to a report in the Archives of Pediatric and Adolescent Medicine. Researchers followed 4,808 students for a year. The kids – all ages 15 or younger – had never had sex at the beginning of the study. Among kids with parents who disapproved of teen sex, those who watched two or more hours of TV per day were 72 percent more likely to start having sex by the end of the study. The researchers said they weren’t surprised to find no TV effect among kids with parents who didn’t care about teen sex since those kids were at high risk of early sex anyway.

4. TV weakens your bones.
Hours spent watching TV can set a kid up for later problems with brittle bones, according to a study published in the Journal of Pediatrics. Until we hit 25 or so, we accumulate bone in a kind of savings account. The more bone we build when we’re younger, the less likely we are to develop the brittle-bone disease osteoporosis.

To see whether TV watching might impact kids’ bone growth, researchers followed 214 3-year-olds for four years. The children’s height and weight were checked every four months, along with their activity levels. At each checkup, parents were asked about their kids’ TV-viewing habits. The more TV kids watched, the less bone they grew, regardless of how active they were at other times.

5. TV makes you less engaging.
A recent study found that when the TV is on – even if it’s just in the background – parents interact less with their kids. To learn more about TV’s effects, researchers brought 51 infants and toddlers, each accompanied by a parent, to a university child study center, according to the report published Child Development. Parents and kids were observed for half an hour in a playroom without a TV and then for a half hour with the TV tuned to an adult program such as “Jeopardy!” When the TV was on, parents spent about 20 percent less time talking to their children. And when parents did pay attention to their kids, the quality of the interactions was lower: With a program on in the background, parents were less active, attentive and responsive to their youngsters.