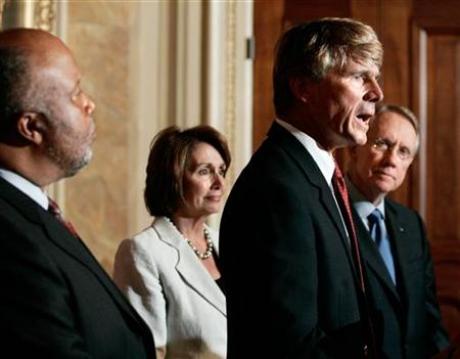 (Reuters) – A small group of U.S. lawmakers unveiled legislation on Thursday to withdraw from the North American Free Trade Agreement in the latest sign of congressional disillusionment with free-trade deals.

The bill spearheaded by Rep. Gene Taylor, a Mississippi Democrat, would require President Barack Obama to give Mexico and Canada six months notice that the United States will no longer be part of the 16-year-old trade pact.

“At a time when 10 to 12 percent of the American people are unemployed, I think Congress has an obligation to put people back to work,” Taylor said.

He argued NAFTA has cost the United States millions of manufacturing jobs and hurt national security by encouraging companies to move production to Mexico.

The high unemployment rate makes it the “perfect” time to push for repeal even though past efforts have failed, he said.

“You’ll see the American people rally behind this, in my humble opinion,” said Rep. Walter Jones, a North Carolina Republican who is one of about 28 co-sponsors of the bill.

Business groups like the National Association of Manufacturers and the U.S. Chamber of Commerce strongly support NAFTA, which they say has spurred U.S. economic growth by tearing down trade barriers between the three countries.

The strongest opposition to those agreements comes from Obama’s fellow Democrats.

Obama criticized NAFTA during the 2008 presidential election campaign but has not followed through on threats to withdraw from the agreement if Canada and Mexico did not agree to revamp the pact’s labor and environmental provisions.

But many Democrats are pushing for that and other changes to existing trade deals before considering any new deals such as the deals with South Korea, Colombia and Panama.

The House of Representatives is expected to vote later this year on whether the United States should remain a member of the World Trade Organization.

U.S. law allows House and Senate members to request a vote on that issue every five years. In 2005, 86 of the House’s 435 members voted to withdraw from the world trade body.