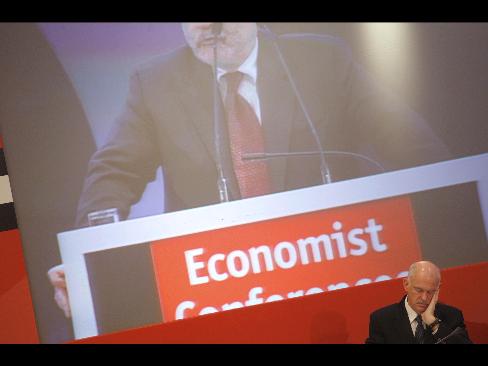 George Papandreou, Greece’s prime minister, pauses during a conference organized by The Economist in Athens, on Feb. 2, 2010. (Bloomberg)

While Papandreou is risking a backlash at home to meet European Union demands for more deficit cuts before allies even consider providing aid, Merkel is facing domestic opposition to tapping taxpayers to extend a financial lifeline to Greece.

“There would be no understanding in Germany for bailing out Greece,” Henrik Enderlein, a political economist at the Hertie School of Governance in Berlin, said by phone. “It’s a bit of catch-22 situation: if you give in to Greece and you put 5 billion or perhaps even 10 billion into some kind of rescue package or into some guarantees, then the German government would look irresponsible. However, if it doesn’t, then European Union leaders might put a lot of pressure on Merkel and say, look, we have to bail out Greece.”

In Athens, about 200 members of the PAME union, aligned with the Communist Party, were reported at the finance ministry and protesters also took over the nearby General Accounting Office, according to a police spokeswoman. Another group blocked a central road, snarling traffic.

The demonstrations followed the Cabinet’s backing yesterday of 4.8 billion euros ($6.6 billion) of cuts, Papandreou’s statement that said Greece was prepared to turn to the International Monetary Fund as a last resort.

“We have fulfilled to the utmost all that we must from our side; now it’s Europe’s turn,” Papandreou told his ministers yesterday, according to an e-mailed transcript. “It is a historic moment for the European Union.”

Greek bonds rose to their highest in three weeks after the Cabinet endorsed a package of revenue-raising and budget-cutting steps, including higher fuel, tobacco and sales taxes and a cut of 30 percent in three bonus payments to civil servants on top of a wage and benefits freeze.

The measures are “convincing,” the European Central Bank said in a statement. The ECB appreciates the Greek government’s recognition of the need to “rapidly adopt and implement decisive structural reforms.”

The euro dropped to $1.3662 as of 8:22 a.m. in Berlin from $1.3697 in New York yesterday, when it climbed to $1.3736, the strongest since Feb. 17. The premium investors demand to buy Greek government debt over comparable German bonds, the European benchmark, slid 2 basis points to 2.84 percentage points, extending yesterday 19 basis point drop.

The Greek announcement “is as much about giving other EU governments more political capital in the event that they do eventually need to provide liquidity to Greece,” said Gary Jenkins, head of credit research at Evolution Securities Ltd. in London. “They can make the claim to their own taxpayers that Greece has taken further measures as suggested by the EU.”

For now, none of the potential lenders has stepped up since a statement at a Feb. 11 EU summit promised “determined and coordinated action” to support Greece.

“There’s no need for such a thing at this point in time,” French Finance Minister Christine Lagarde said late yesterday on Sky television. “If it was required, the partners in the club would be available to restore stability.”

After meeting Merkel in Berlin, the Greek leader is due in Paris two days later for talks with French President Nicolas Sarkozy.

While Greece is pressing EU leaders to help cover the bloc’s largest budget deficit, Merkel’s comments were the clearest signal yet that Germany isn’t convinced.

“I expressly want to say that Friday isn’t about aid commitments, but about good relations between Germany and Greece,” Merkel said yesterday in an interview with N-TV, according to a transcript provided by her office. Greece’s steps are “an important signal” toward restoring confidence in the euro.

Greece faces more than 20 billion euros in debt redemptions in April and May. The EU is devising a plan to grant Greece about 25 billion euros in emergency aid should the need arise, German lawmakers have said, enough to cover the maturing debt. One option could involve using state-owned lenders such as Germany’s KfW Group to buy its bonds.

Greece has pledged to trim a deficit of 12.7 percent of gross domestic product to 8.7 percent this year. Concern that Greece won’t be able to tame the shortfall saw the euro lose almost 5 percent against the dollar this year.

Greece has blamed market speculators for fueling the decline in its securities. European officials have warned hedge funds that they shouldn’t try to profit from the woes of the region’s nations. U.S. authorities have told some hedge funds not to destroy trading records on euro bets, according to a person with knowledge of the requests.

Banks and regulators across Europe were summoned by the European Commission to discuss regulation of the market for sovereign credit-default swaps in the wake of the Greek debt crisis.

This is not about Germany vs. Greece.

This is about the elite (that controls banks, corporations, governments and central banks) vs. the people!