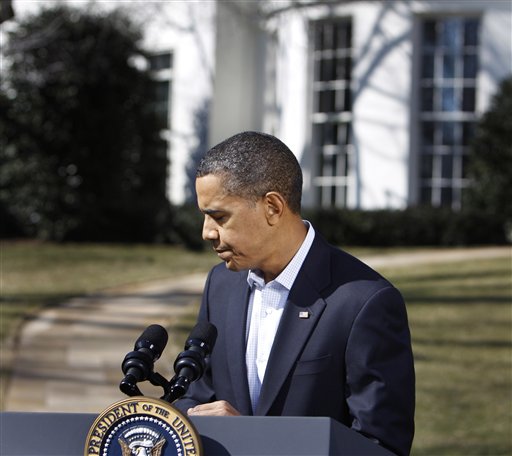 President Barack Obama turns to leave after speaking to the media about the recent earthquake in Chile outside the Oval Office of the White House in Washington Saturday, Feb. 27, 2010. Obama called the earthquake “devastating,”and said the U.S. has resources in position to deploy should Chile ask for help. (AP)

Provisions in the measure would have expired on Sunday without Obama’s signature Saturday.

The act, which was adopted in the weeks after the Sept. 11, 2001 terror attacks, expands the government’s ability to monitor Americans in the name of national security.

Three sections of the Patriot Act that stay in force will:

– Allow court-approved seizure of records and property in anti-terrorism operations.

– Permit surveillance against a so-called lone wolf, a non-U.S. citizen engaged in terrorism who may not be part of a recognized terrorist group.

Obama’s signature comes after the House voted 315 to 97 Thursday to extend the measure.

The Senate also approved the measure, with privacy protections cast aside when Senate Democrats lacked the necessary 60-vote supermajority to pass them. Thrown away were restrictions and greater scrutiny on the government’s authority to spy on Americans and seize their records.