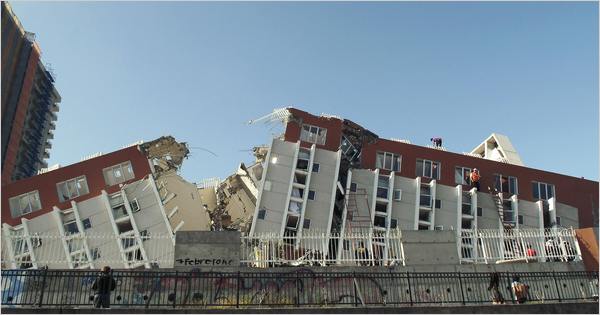 Rescuers searched for victims and survivors after an apartment complex collapsed in Concepcion. 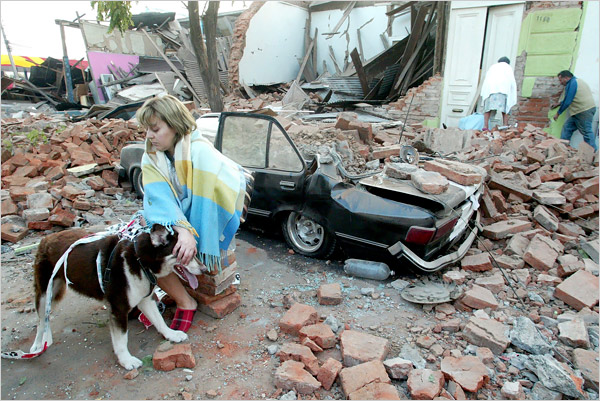 A woman sat in front a quake-damaged house in Talca, Chile. Residents were also jolted by at least 20 aftershocks measuring over 5.0 on the magnitude scale, with one topping 6.9. 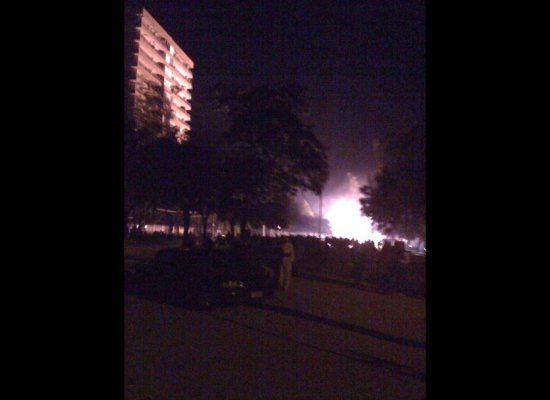 A photo of Santiago, Chile after the quake. Uploaded by Twitter user @Gonzalezcarcey.

Phone lines were down in Concepcion as of 7:30 a.m. and no reports were coming out of that area. The quake in Chile was 1,000 times more powerful than the magnitude 7.0 earthquake that caused widespread damage in Haiti on Jan 12, killing at least 230,000, earthquake experts reported on CNN International.

UPDATE: 8:00 a.m. — 78 and rising — AP now reports that the death toll is at 78 and rising. Officials have no information yet on number of injured. 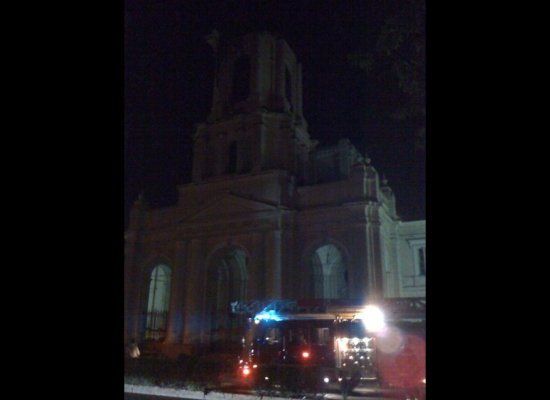 President Michele Bachelet has declared a “state of catastrophe,” according to the Associated Press:

“We have had a huge earthquake, with some aftershocks,” Bachelet said, appealing from an emergency response center for Chileans to remain calm. “Despite this, the system is
functioning. People should remain calm. We’re doing everything we can with all the forces we have. Any information we will share immediately.”

Bachelet said early reports were that 16 people had been killed, and “without a doubt, with an earthquake of this magnitude, there will be more deaths.”

In the 2 1/2 hours following the 90-second quake, the U.S. Geological Survey reported 11 aftershocks, of which five measured 6.0 or above.

She urged people to avoid traveling in the dark, since traffic lights are down, to avoid causing more fatalities.

The epicenter was just 70 miles (115 kilometers) from Concepcion, Chile’s second-largest city, where more than 200,000 people live along the Bio Bio river, and 60 miles from the ski town of Chillan, a gateway to Andean ski resorts that was destroyed in a 1939 earthquake.

In Santiago, the capital, modern buildings are built to withstand earthquakes, but many older ones were heavily damaged, including the Nuestra Senora de la Providencia church, whose bell tower collapsed. An apartment building’s two-level parking lot also flattened onto the ground floor, smashing about 50 cars whose alarms and horns rang incessantly. A bridge just outside the capital also collapsed, and at least one car flipped upside down.

In the coastal city of Vina del Mar, the earthquake struck just as people were leaving a disco, Julio Alvarez told Radio Cooperativa in Santiago. “It was very bad, people were screaming, some people were running, others appeared paralyzed. I was one of them.”

Bachelet said she was declaring a “state of catastrophe” in 3 central regions of the country, and that while emergency responders were waiting for first light to get details, it was evident that damage was extensive.

UPDATE: 5:56 a.m. — 17 dead — At least 17 people have died in Chile’s earthquake, according to radio reports from Santiago. Reuters:

Local radio said 17 people were killed and President Michelle Bachelet confirmed six deaths, saying more were possible. Telephone and power lines were down, making a quick damage assessment difficult in the early morning darkness.”Never in my life have I experienced a quake like this, it’s like the end of the world,” one man told local television from the city of Temuco, where the quake damaged buildings and forced staff to evacuate the regional hospital.

President Michelle Bachelet said six people were killed and that more deaths were possible. Telephone and power lines were down, making a quick assessment of the damage difficult in the early morning darkness.

UPDATE: 4:15 a.m. — Tsunami generated — CNN International reports that the earthquake has generated a Tsunami. Warnings have been issued for Chile and Peru. A tsunami watch has been issued for Ecuador, Colombia, Panama, Costa Rica and Antarctica.

SANTIAGO, Chile (AP)– A massive 8.8-magnitude earthquake capable of tremendous damage struck central Chile early Saturday, shaking the capital for a minute and a half and setting off a tsunami. Buildings collapsed and phone lines and electricity were down, making the extent of the damage difficult to determine.

The epicenter was just 70 miles (115 kilometers) from Concepcion, Chile’s second-largest city, where more than 200,000 people live along the Bio Bio river, and 60 miles from the ski town of Chillan, a gateway to Andean ski resorts that was destroyed in a 1939 earthquake.

An Associated Press Television News cameraman said some buildings collapsed in Santiago and power was out in parts of the city. Phone lines were either down or busy, making confirmation of damage difficult elsewhere, especially further south toward the epicenter. The quake was felt in Argentina as well.

The Pacific Tsunami Warning Center issued a warning for Chile and Peru, and a less-urgent tsunami watch for Ecuador, Colombia, Panama, Costa Rica and Antarctica.

“Sea level readings indicate a tsunami was generated. It may have been destructive along coasts near the earthquake epicenter and could also be a threat to more distant coasts,” the center said.

The U.S. west coast tsunami warning center said it did not expect a tsunami along the west of the U.S. or Canada but was continuing to monitor the situation.

The largest earthquake ever recorded struck the same area of Chile on May 22, 1960. The magnitude-9.5 quake killed 1,655 people and left 2 million homeless. The tsunami that it caused killed people in Hawaii, Japan and the Philippines and caused damage to the west coast of the United States.