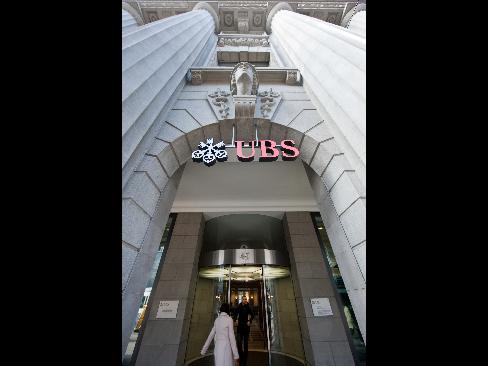 A pedestrian enters the UBS headquarters on Bahnhofstrasse in Zurich (Bloomberg)

The Federal Administrative Court, in a decision published today, told Switzerland’s tax authority to comply with an earlier ruling that blocked it from sending the U.S. information on 26 UBS customers. The court in Bern said Switzerland may only lift bank secrecy rules when there is evidence of tax fraud.

The ruling increases pressure on the Swiss to find a way to salvage the agreement to hand over data on as many as 4,450 UBS account holders as part of a U.S. crackdown on tax evasion. Ministers said this week they will ask the parliament to approve the U.S. settlement to get around the court rulings.

“It’s a difficult time with many options and political pressures,” said Wolfram Kuoni, whose Zurich law firm advises banks and entrepreneurs. “You’ve got to remember the government isn’t led by one president, but seven ministers.”

The two UBS clients involved in today’s decision are among 26 covered by last month’s ruling. The court said that the account holders’ conduct, failing to complete tax forms or declare income, was tax evasion rather than tax fraud. Under Swiss law, tax fraud is a criminal offense, which allows the government to lift bank secrecy laws. Evasion is a civil matter.

“If the Swiss Federal Tax Administration doesn’t reconsider these 22 cases in the coming days, the Federal Administrative court will take them up and rule on them,” the court in Bern said in an e-mailed statement today. The court won’t look at one case because the party missed a deadline.

Switzerland agreed in August to review account data for the U.S. to help Zurich-based UBS settle a lawsuit that sought information on clients suspected of tax evasion and tax fraud. That deal froze the lawsuit that the U.S. had filed against the largest Swiss bank after UBS admitted aiding tax evasion.

The terms of the agreement aren’t fully enforceable under Swiss law because they don’t alter an existing international treaty, the court said in January.

With parliamentary approval, the court won’t be able to “regard the UBS agreement as merely a mutual agreement” as it will have the same legal weight as a treaty, the government said. Approval would allow the country to “bring a final resolution to its legal and sovereignty dispute with the USA.”

In the agreement, the two countries said that U.S. citizens who benefited from offshore company accounts with UBS between 2001 and 2008, as well as U.S.-based clients who didn’t disclose accounts or deposits in excess of 1 million Swiss francs ($930,000) could be covered by a request for assistance from the U.S. if there is a suspicion of “tax fraud or the like.”

To contact the reporter on this story: Joseph Heaven in Zurich at jheaven1@bloomberg.net