So you are tracked down, when using your cell phone, …

… and you’re greatly increase your chances of developing cancer: 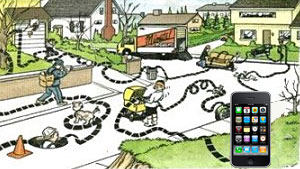 We’d like to think of ourselves as dynamic, unpredictable individuals, but according to new research, that’s not the case at all. In a study published in last week’s Science, researchers looked at customer location data culled from cellular service providers. By looking at how customers moved around, the authors of the study found that it may be possible to predict human movement patterns and location up to 93 percent of the time. These findings may be useful in multiple fields, including city planning, mobile communication resource management, and anticipating the spread of viruses.

It’s not currently possible to know exactly where everyone is all the time, but cell phones can provide a pretty good approximation. Cell phone companies store records of customers’ locations based on when the customers’ phones connect to towers during calls. Researchers realized that taking this data and paring it down to users who place calls more frequently might allow them to see if they could develop any measure of how predictable human movements and locations are. The users they worked with placed calls an average of once every two hours, connecting to towers that cover an area of about two square miles.

The authors analyzed various aspects of the information related to the calls, as well as information that could be aggregated over multiple calls: number of distinct locations, historical probability that the location had been visited in the past, time spent at each tower, the order in which customers usually visited towers, and so on. With these numbers, the authors could create measures of the entropy of the customers’ trajectories. To control for uncertainty, they also looked at instances where a customer was not in communication with the grid and effectively invisible to them, and removed those that had frequent extended periods of invisibility.

Most customers seemed to stick to the same small area, a radius of six miles or less, but there were a few callers that regularly traveled areas of a radius of hundreds of miles. It would seem that the cell phone users who traveled the least would be the most predictable in their movements, but the authors found this to be untrue. All users were roughly equally predictable, regardless of the size of their typical traveled region. Everyone seemed to have a set area that they rarely left, and that area was always traveled in a very regular way-even the jet-setters appear to rarely deviate from their travel patterns.

Customers that stuck to the same six-mile radius had predictability rates of 97 to 93 percent, and this fell off as the typical area of travel grew. But the predictability eventually stabilized, and remained at 93 percent even as the radius of travel rose to thousands of miles. Regardless of how widely they traveled, the researchers could adequately predict their locations, down to the specific tower, 93 percent of the time.

Breaking down the schedules of users by the hour allowed the authors to see how the variability changed during the course of a day. As might be expected, users’ locations had the lowest measures of regularity during transition periods, such as the hours before and after work and during lunch times. Customers also had a 70 percent likelihood of being at their number one most-visited location at any random point in time. That’s quite a high number, considering that randomizing positions over the average number of locations visited per person gives a 1.6 percent likelihood of finding them at each one.

The authors note that this research has a variety of practical implications. Knowing how easy it is to predict human movement, mobile communications businesses could anticipate data load (we’re looking at you, AT&T) and city planners could use the data to inform their models of traffic flow. The big limitation of the study was the restriction of the analysis to fairly frequent cell phone users, but it might be possible to combine this with other data sets to form harder and faster human location predictions.