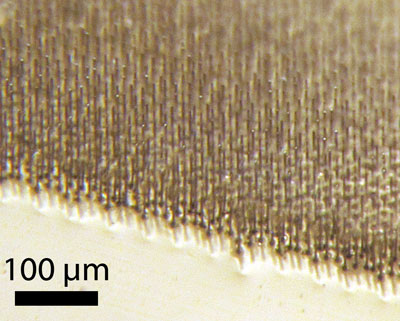 PORTLAND, Ore. – By growing arrays of silicon wires in a polymer substrate, researchers have demonstrated what they say are flexible solar cells that absorb up to 96 percent of incident light.

California Institute of Technology (Caltech) researchers said the wires are made up of 98 percent plastic, potentially lowering the cost of photovoltaics by using just 1/50th the amount of semiconductor material used today. In tests, the experimental solar cells demonstrated over 90 percent quantum efficiency, compared with 25 percent for the best silicon solar cells.

The silicon wires measure just 1 micron in diameter, but can be as long as 100 microns and can be embedded in a transparent polymer. Light is converted into electricity only inside the wires, but light not immediately absorbed bounces around inside the matrix until it enters another wire. The result, researchers said, is both high concentration and high efficiency in the material.

Solar cells based on the technique could potentially be very inexpensive to manufacture since only 2 percent of the materials are expensive semiconductors while the remainder is made from inexpensive plastic.

The new material is about the same overall thickness as a conventional solar cells–about 100 microns–but contain as much silicon as a solar cell measuring just 2 microns in thickness.

Atwater said he is now working to increase the operating voltage and size of the solar cells so that they can eventually be manufactured in flexible sheets using inexpensive roll-to-roll fabrication equipment.

Funding for the Caltech research was provided by BP, the U.S. Energy Department, the National Science Foundation and the Kavli Nanoscience Institute at Caltech.